Copulation Calls in Chimpanzees and the Possible Sasquatch Connection

I ran across an interesting abstract on the website of the International Journal of Primatology recently. The abstract, written by Simon William Townsend, Tobias Deschner, and Klaus Zuberbuhler, is entitled Copulation Calls in Female Chimpanzees (Pan troglodytes schweinfurthii) Convey Identity but Do Not Accurately Reflect Fertility. Not the most exciting title in the world but an interesting abstract, nonetheless.

The abstract centers around the copulation calls of female chimpanzees. Copulation calls, it is pointed out, are a relatively common feature of female primate behavior. It is generally thought that these calls are an advertisement of female receptivity and also serve to incite male-to-male competition for the affections of said receptive female. Most of the research on primate copulation calls has focused on various small monkey species and not on any of the great apes. This particular study sought to remedy that situation and the results were interesting.

The authors point out that the little previous research that focused on chimpanzee copulation calls suggests estrous females call to avoid monopolization by a single male and to minimize competition from other females. For their study, the authors examined the acoustic structure of the calls of six adult female chimpanzees. In total they recorded and studied 71 separate copulation call bouts from these six individuals living in the Budongo Forest of Uganda. The researchers failed to find any acoustic differences in the calls given by the female chimpanzees based on whether or not they were made during fertile or non-fertile periods. However, what they did find were repeated encoded identity cues of each calling female. The authors constructed a couple of different hypothesis based on the data analyzed but the final line of the abstract is what interested me the most. It reads, “Owing to the low visibility conditions associated with chimpanzees natural forest habitat and their dispersed social system, providing identity cues may be of particular biological relevance for these nonhuman primates.” Being who I am, after reading this abstract, I began to ponder on how this information might relate to North America’s great ape. People have long reported screams, howls, grunts, and growls from some of the most inaccessible and isolated areas of the country that they cannot attribute to any known species. These inhospitable areas where the sasquatch is reportedly seen and heard from time to time could easily be described as having low visibility conditions due to incredibly dense foliage, not unlike the habitat of the chimpanzees observed by the authors of this study. It would seem logical to assume that in order to communicate with other members of the species across this thickly wooded habitat the sasquatch would have had to develop a variety of vocalizations or calls similar to those used by chimpanzees.

The most famous call attributed to the sasquatch is usually called the Ohio howl. The Ohio howl was recorded in Columbiana County, Ohio back in 1994 by Matt Moneymaker and Jamie Watson. The call originated from an area not too far from the Ohio River. You can hear the Ohio howl by clicking here. It is true that it cannot be absolutely proven that a sasquatch is the howler in this clip. What is true is that I’ve heard this very same howl on several occasions in the deep woods of East Texas. Whatever was howling in Ohio seems to have kin in Texas, Louisiana, and Arkansas. A variety of other strange calls, screams, grunts, growls, whistles, whoops, and mumblings have been recorded that seem to defy conventional explanation. The BFRO website has a nice library featuring a variety of these calls. I would encourage you to visit the site and take a listen. It is very interesting. 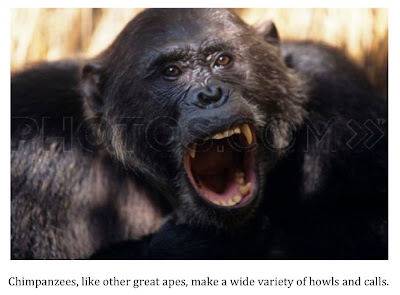 It is possible that sasquatches are mainly solitary but, if so, they must come together from time to time if for not other reason than to mate. Could the strange simian-like howls reported for decades be copulation calls? What about the other strange noises attributed to the sasquatch? Do they convey cues to the identity of the caller? The great apes make a wide variety of noises that convey a great many different messages. Check out this library of chimpanzee vocalizations at the Jane Goodall Institute website for some examples of this. If one accepts the premise that the sasquatch could exist, then it is not unreasonable to assume it actually vocalizes at times like the other great apes. In fact, it would be far more surprising if they did not vocalize in some manner.

As mentioned above, sasquatches are considered to be mainly solitary by most due to the fact that sightings of multiple individuals are rarely reported by witnesses; however, recent experiences in the field have led me to believe that these animals might be more social than most people think. My observations, and those of my fellow TBRC members, seem to indicate that these animals may very well live in small groups. Whether these groups are true family units with a male, female, and offspring or in troupes or clans remains to be seen. While such claims are rare, small clans and family groups of sasquatches have been reported in the past. One need only to review the reports of Albert Ostman, Muchalat Harry, and Fred Beck as a reminder that such claims have occurred. If true, does living in small groups lend itself to more or less verbal communication? 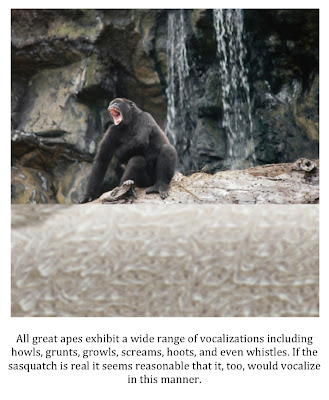 I have been guilty of dismissing a lot of audio recordings featuring calls and other noises that were said to be bigfoot in origin. Recent experiences along with a growing understanding of great ape behaviors have me rethinking my conclusions on some of these recordings. I stand by my opinion that audio recordings alone will never be enough to prove the existence of the sasquatch but the wide array of noises and calls associated with this creature really don’t seem to be too different than those associated with the known great apes. Again, assuming the sasquatch to be a living species, it would be far more surprising if they did not vocalize in the some of the ways witnesses have described.

Are these strange calls, thought to be sasquatch in origin, copulation calls? Challenges to territorial interlopers? Do these calls contain cues to the identity of individuals? All questions with no answers at this point. Let’s hope we can get this species documented so that we can begin delving into these questions.
Posted by Mike at 6:44 PM