A Rockwall, Texas roofing contractor named Gary Byrd made a very significant fossil discovery earlier this year. According to an article posted on the Science Daily website, Byrd discovered what are likely bones from the wing of a pterosaur. Specifically, the bones likely belong to a flying reptile dubbed Pteranodon. Pterandodon was a fairly typical type of pterosaur that had broad leathery wings and a slim torso and likely fits the picture most of us envision when we picture a “pterodactyl” with a bony crest.

This particular specimen would have died roughly 89 million years ago. This would make it the oldest Pteranodon specimen ever found found in North America by 1-2 million years and the second oldest example of a pteranodontid in the world. The find is special due to the rarity of pterosaur fossils.

Timothy S. Myers, a paleontologist at Southern Methodist University in Dallas, said, “Any pterosaur material is fairly rare to find unless you have exceptional preservation conditions. They are frail, fragile bones, and they require rapid burial to be well preserved.” Myers added that the find of multiple bones, all from the creature’s left wing, is unusual. He pointed out that typical finds are of only one bone or a piece of one bone.

Pteranodon was a type of pterosaur that lived during the age of the dinosaurs in the late Triassic Period. Early pterosaurs had thin sharp teeth but later the toothed variety disappeared and the toothless forms, like Pteranodon, took their place. The pterosaurs were mainly fish eaters who flew above what is now Texas during a time when a large ancient sea bisected the North American continent from the Arctic to the Gulf of Mexico. Pteranodon was large, with a wingspan of 12-13 feet, but far from the biggest pterosaur that ever lived. It likely subsisted almost entirely on fish and may have floated on ocean thermals for days at a time in search of prey. 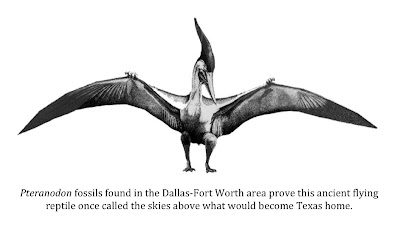 The DFW area has actually yielded a wealth of pterosaur fossils. Remains of both the toothless and toothed varieties have been found in the area. In particular, the remains of a toothed type of pterosaur called Aetodactylus halli, which lived approximately 95 million years ago, was found in the area and also positively identified by Myers.

“This new specimen adds a lot more information about pterosaurs in North America,” Myers said. “It helps constrain the timing of the transition from the toothed to toothless because there’s only a few million years separating this specimen and Aetodactylus.”

The fact that pterosaurs once did soar about what would become the Lone Star State has, once again, led some to ask if they could still exist and, if so, be candidates to explain the sightings of giant flying creatures or “thunderbirds” that filter in mainly from South and West Texas. Is it possible? Could a small population of pterosaurs, maybe even Pteranodon itself, have survived to this day? As has been covered here before, some reports seem to point to this possibility. Following is an excerpt from a post I did on thunderbirds back in November of 2010 titled Texas Pterosaurs:

“In 1976 two San Benito, Texas police officers, Arturo Padilla and Homer Galvan, reported seeing what was to become known as the "Texas Big Bird". While that might invoke images of the Sesame Street character to most people, rest assured, the creature seen by these officers fit the description of a pterosaur...

...In February of the same year, it was reported that several school teachers were "dive-bombed" by a creature matching the description of a pterosaur on their way to work. They reported the creature's wingspan to be at least 12 feet in length.”

What has also been pointed out on this site is that the chances of there being living pterosaurs of any kind left in Texas is very, very slim. TBRC Chairman Alton Higgins, spurred by reported sightings of living pterosaurs off the coast of New Guinea, pointed out that what the researchers were likely seeing were frigatebirds. Alton, in an article titled Pterosaurs and Thunderbirds, also pointed out that, while mainly seafaring by nature, frigatebirds do, on occasion, venture far inland and could be candidates for Texas pterosaurs. An excerpt from Alton’s piece reads as follows:

“All in all, the typical Texan would not be expected to see a frigatebird (Fregata magnificens) in his or her lifetime and would be even less likely to know what they were seeing. The fact that these impressive birds, with their singular appearance, range rarely and unexpectedly into unfamiliar domains could account for some of the reports from baffled witnesses who mistakenly relate their sightings to extinct and mysterious creatures.”

I have to say that I agree with Alton Higgins and feel it is highly unlikely any pterosaurs have survived into modern times. I stated several possible explanations for pterosaur sightings back in the Texas Pterosaurs post in 2010. I’ll not rehash all that now. I will add that the fact that pterosaurs were mainly fish-eaters makes it even more unlikely that they would be seen in the arid deserts of South and West Texas even if they had somehow survived to the present day.

So, in my opinion, even though Texas was once home to many of these creatures, pterosaurs are not particularly good candidates for the thunderbirds seen on occasion by people in Texas and the southwest. This in no way dampens my enthusiasm for the fossil find of Gary Byrd. It is a significant find and, as Timothy S. Myers of SMU pointed out, it will help further our knowledge of these ancient flying reptiles.

It just doesn’t further our knowledge of what the thunderbirds people continue to report might be.