I've had one game camera out for the last month in what I call "Location 1." This is the area where a woman told me she witnessed a large cat, matching the description of a cougar, crossing the road. This incident allegedly took place over a year ago now. I've had a camera in the woods adjacent to this spot off and on since that time.

I had the camera in a slightly different location this time around. The camera was mounted to a tree looking over a flat open spot that has a game trail running through it. The dry creek bed that runs through the area is at the back of the open area from the point of view of the camera. You can't really see the creek, as it drops away to a depth of about three feet, but you can see in several shots animals coming up and out of the creek or eye-shine just above the edge of the bank. 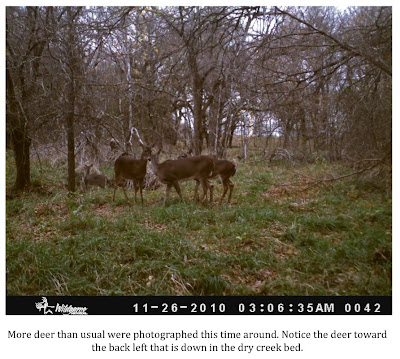 I managed to capture a ton of photos of white-tailed deer (Odocoileus virginianus). The number of deer in the area, according to this photo census, seems to have increased greatly. This could be due to hunting pressure the deer are experiencing now. This area is within the city limits where hunting is not allowed. One thing that makes me think this could be true is the presence of a couple of nice bucks. In the past, I've only managed to get shots of doe in this area. It could also be that the number of deer in the area has remained constant and I only got more photos due to the camera being in a better location. Whatever the case, I got lots of great shots of deer. 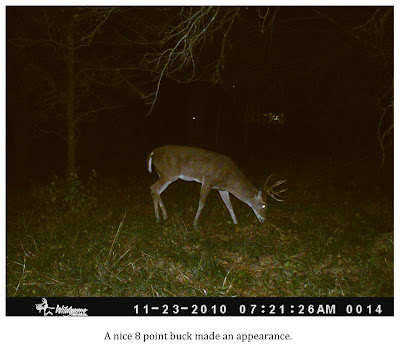 I got one great shot of a pair of coyotes (Canis latrans) on the run as they come up out of the creek toward the general location of the camera. This is the first time I've managed to get a shot of both of these coyotes. The last time around I got two different shots of coyotes. I thought they were of two different individuals but could not be sure. This shot confirms there are at least two coyotes roaming this area. Last year I got a shot of a coyote sniffing a tree on which I had applied scent-bait that was more brownish-red in color than either of these two. I have not seen him for quite a while now. 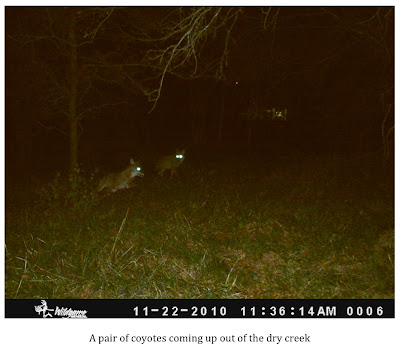 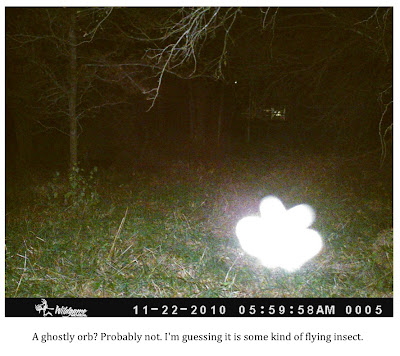 So, to wrap up, I got some nice shots but didn't get anything unusual. That is not unexpected. I'm sort of biding my time until hunting season is over here in Texas and then plan on deploying at least four cameras in heavily wooded areas of SE Texas in the hopes of capturing a wider variety of animals. I will fill you in on those details soon.

I can't tell you how much I enjoy camera-trapping. I find myself sitting in my house at night thinking about the cameras out in the field. I wonder what has walked by them as they have kept their vigil 24/7. I get genuinely excited when I go to pull the memory cards from these cameras. I imagine that anticipation will only grow as I place the cameras in locations where creatures like black panthers and sasquatches have been reported.
Posted by Mike at 9:13 AM