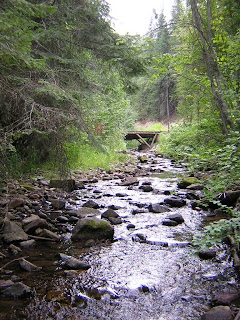 Many people think that the modern "sasquatch phenomenon" began in 1958 when Jerry Crew found huge human-like footprints surrounding his bulldozer at a Bluff Creek, California work site. They would be wrong. In 1941 an American Indian family had what has become a very well known encounter with a sasquatch in British Columbia, Canada. Details of the encounter did not emerge to the world at large until Ivan Marx published an account of the encounter in a 1960 issue of True magazine. The encounter has become known simply as the Ruby Creek incident.

George and Jeannie Chapman lived in a small cabin near the banks of the Fraser River just outside the settlement of Ruby Creek in British Columbia with their three children. George Chapman worked for the railroad while Jeannie stayed home with the children and tended to vegetable patches near the cabin. One bright September day, while Mr. Chapman was away at work, Jeannie and the children had a harrowing encounter that has become the stuff of legend.

About 3:00 in the afternoon the oldest of the Chapman children, age 9, came running into the family cabin shouting that a cow was coming down the hill out of the woods. The boy seemed to be far too agitated to have seen a mere cow so Mrs. Chapman stepped out to have a look for herself. She spotted the animal immediately on the hillside and initially mistook it for a very large bear. She called her other two children, ages 7 and 5, who had been playing in a field behind the house, to her side as a precaution. Shortly thereafter, the creature stepped out into an open area near the railroad tracks that ran next to the cabin. It was then that Jeannie Chapman realized this was no bear.

Mrs. Chapman described what she saw as a huge hair-covered man. The "man" stood between seven and eight feet tall (Mrs. Chapman based this estimate on how tall the creature was in comparison to several fence posts that it walked by), was huge through the chest and shoulders, had arms far longer than a man, a small head, no neck to speak of, and was covered in a brownish-ochre colored hair. Mrs. Chapman noted that the skin of the creature, visible on the face and hands, was very dark; nearly black. No genitalia were visible as the creature's groin area was covered by long hair; however, no prominent breasts were present so Mrs. Chapman assumed the animal was a male.

The detailed description provided by Jeannie Chapman is really amazing (it is perhaps rivaled only by the physical descriptions of sasquatch anatomy given by William Roe and Albert Ostman). She had ample time to observe the creature as it advanced along the railroad tracks straight toward her. In her words, she had "much too much time to look at it." This is a direct result of Mrs. Chapman holding her ground and staying between her children and the advancing animal. 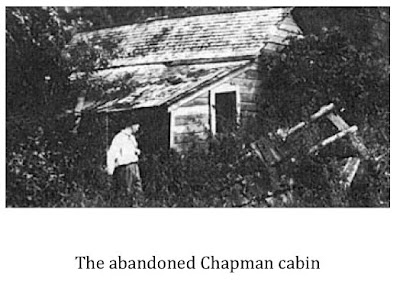 As the sasquatch continued to shamble toward her cabin, Mrs. Chapman sent her oldest boy into the house to retrieve a blanket. He returned with it quickly and handed it to his mother who then spread the blanket out and held it in front of her. She instructed her children to stay behind the blanket and out of the line of sight of the creature. It was while holding the blanket in this manner that Jeannie Chapman backed quickly away from the advancing sasquatch and her cabin. The family retreated across a small field until they reached the banks of the river. At this point, the family turned and ran downstream toward the settlement of Ruby Creek. When asked why she covered the children in this manner, Jeannie Chapman gave a simple and very logical answer, "I used the blanket because I thought it was after one of the kids and so might go into the house looking for them instead of following me."

Mrs. Chapman's theory seemed to hold true as the animal did enter the cabin instead of pursuing the family. Whether it was really after one of the children is subject to speculation. What is known is that the house was ransacked. The sasquatch left the cabin at some point and moved on to an old outhouse-style structure that was being used as a storage shed and pantry. The door, which had been reinforced to discourage bears, was smashed open and the contents of the small building scattered about. Incredibly, a sealed fifty-five gallon barrel of dried fish had been removed from the outhouse and ripped open. Some of the fish seemed to have been partially eaten while the rest, along with the remnants of the barrel, were scattered on the ground.

Roughly two hours later George Chapman returned home from work. He was greeted by the sight of his wide-open ransacked cabin, a smashed storage building, and giant human-like footprints in the soft soil around his cabin. Chapman realized immediately this was the work of one of the "wild men of the woods" that he had heard tales of as a youth. Understandably alarmed, Chapman called out to his wife and children but received no answer. His panic subsided a bit when he found the tracks of his family headed downstream toward the village with no sign that they were followed. Chapman did backtrack and find that the interloper had retreated across a potato patch (the animal was heavy enough to have crushed potatoes still in the ground), crossed a four foot high barbed wire fence without breaking stride, forded the creek, and walked up the hill back into the forest. Chapman would finally find his family at his father's house in the village. They were shaken but unharmed.

Several men from Ruby Creek returned to the Chapman cabin almost immediately. All saw the huge footprints, the ransacked home, and the smashed door on the outhouse-style storage building. Bellingham, Washington Deputy Sheriff Joe Dunn, who had a personal interest in the sasquatch, and a co-worker of George Chapman named Esse Tyftin, were two who made the trek to the site. They located many tracks, took some measurements, made a plaster cast, and traced an outline of one of the better prints. These gentlemen, along with several others, made sworn statements before a local magistrate as to what they had seen at the request of noted researcher John Green. 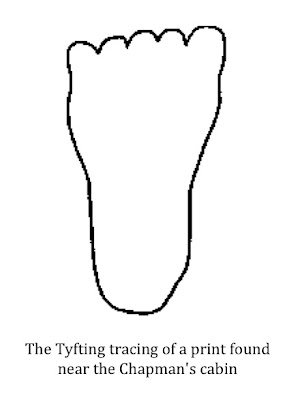 The Chapmans returned to their cabin within a day of the initial incident. Mr. Chapman's father, armed with his rifle, sat with Jeannie and the kids during the day until George returned from work in the evening. The creature visited the cabin nightly for the next week. It did not touch the cabin or the storage building but left huge footprints and did make some strange noises. The couple related their experiences to Ivan Marx. "It made an awful funny noise," said Jeannie Chapman.

Marx would go on to write:

I asked her if she could imitate this noise for me but it was her husband who did so, saying that he had heard it at night twice during the week after the first incident. He then proceeded to utter exactly the same strange gurgling whistle that the men in California, who said they had heard a bigfoot call, had given us. This is a sound I cannot reproduce in print but I can assure you that it is unlike anything I have ever heard given by man or beast anywhere in the world. To me, this information is of the greatest significance. That an Amerindian couple in British Columbia should give out with exactly the same strange sound in connection with a sasquatch that two highly educated white men did over six hundred miles south in connection with California's bigfoot, is incredible.

Putting aside the subtle racist undertones of Marx's comments, he has a valid point. You must remember that this all happened in 1941. There were no Discovery Channel specials on cable or bigfoot related internet sites. Neither Leonard Nimoy nor Peter Graves had begun to look into the sasquatch phenomenon on network television. Jerry Crew was still seventeen years shy of finding enormous footprints at his job site and the term "bigfoot" had yet to be coined. Roger Patterson and Bob Gimlin would not capture their famous footage for another twenty-seven years. There was simply no way, other than the tales they heard growing up, that the Chapmans would have had any knowledge of the sasquatch. The fact that their descriptions of the strange gurgling whistle and the physical characteristics of the creature exactly match those given by others hundreds of miles away certainly lends credence to the tale.

The whole thing was too much for the Chapmans and they abandoned their cabin. They never returned to it though they did stay in the general vicinity. Relatives of the couple told John Green that Jeannie Chapman never really got over the incident and had never been the same. Ivan Marx, during his interview with the couple, asked if they believed, as many First Nations people did, that seeing a sasquatch was bad luck and meant impending disaster. Was this part of the reason they abandoned their home? They answered that they had heard white men mention this belief but that they had never heard it from their own people. Unfortunately, tragedy did follow them. Within three years of the incident all three of the Chapman children were dead. Both boys drowned while the little girl died of an unspecified illness. Shortly after the Marx interview, which did take place years after the incident, George and Jeannie Chapman drowned in the Fraser River after their rowboat overturned. Make of these events what you will.

Did the Ruby Creek incident really occur? For his part, Ivan Marx had no doubts. He wrote, "I absolutely refuse to listen to anybody who might say they were lying." He went on saying, "Admittedly, honest men are such a rarity as possibly to be nonexistent but I have met a few who could qualify and I put the Chapmans near the head of the list."

John Green, too, seemed convinced the events unfolded as described. Not only did he feel the Chapmans were credible but was also impressed by Deputy Sheriff Joe Dunn and Esse Tyfting, in particular, who investigated the sighting shortly after it occurred. You can see a short video of Green and Tyfting talking about the Ruby Creek incident below.

As for me, I believe this event did occur and unfolded as described by the Chapmans. The Ruby Creek incident is one of the best documented sasquatch encounters ever. Multiple quality investigators looked into this case and, to my knowledge, without exception found the Chapmans to be credible. They all believed them. Physical evidence was left behind and documented by multiple people including a Deputy Sheriff. Hairs in the storage building were located, multiple footprints in excess of seventeen inches were found, a reinforced door was smashed to bits, and a fifty-five pound barrel of dried fish was ripped to pieces, apparently, without the use of any tools, etc. The witnesses all made statements under oath that they saw this evidence.

Yes, the incident at Ruby Creek took place. Of that I have no doubt.
Posted by Mike at 10:22 PM