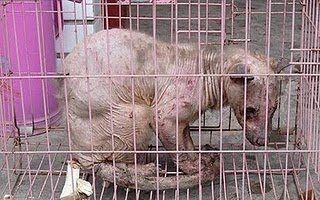 An article in the April 5th online edition of the London Daily Telegraph documents the capture of a strange creature that has been dubbed the "Oriental Yeti". The strange hairless creature has eluded classification by the scientists that have been able to examine it to this point. The animal was trapped in a remote area of the Sichuan Province by local villagers.

The article does not give specifics as to the size of the animal but it must have been a fairly large creature based on several statements in the article. For example, a person identified as Hunter Lu Chin is quoted as saying, "It looks a bit like a bear but it doesn't have any fur and it has a tail like a kangaroo." The article also mentions that the creature was caught after locals had reported seeing what they thought was a bear. The article then references a local folkloric tale that tells the story of a bear that once was a man. Apparently, some locals feel this is the animal that has been captured.

The article mentions that the creature has a, "voice like a cat," and that it will soon be sent to Beijing where DNA tests will be performed in an attempt to positively identify the species to which this animal belongs. You can read the London Daily Telegraph article here.

After viewing the photo of this odd looking "Oriental Yeti" I was reminded of the various hairless canid-like animals being seen here in Texas on a regular basis over the last few years. These odd looking creatures are being called "blue dogs" and, ever increasingly, "chupacabras". The chupacabra, of course, is a cryptid whose legend began in Latin America, specifically Puerto Rico. Also called the "goat sucker", the chupacabra supposedly attacks small domestic animals like chickens, goats, and sheep. It is said it kills by making two small puncture wounds on its victim through which it drains its blood. Usually, no other marks are present on the body of the victim. Immigration has brought the legend of the chupacabra to America. It seems any hairless animal that is captured or killed is being categorized as a chupacabra these days. 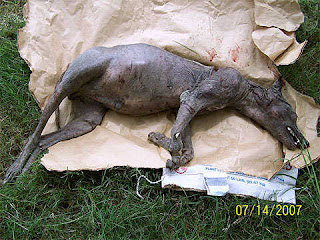 Strangely, the original descriptions of the chupacabra don't resemble anything close to the strange creatures being seen now. The chupacabra, according to early reports, was an upright alien looking creature with large glowing eyes, spikes protruding off its back, and large claws (see photo below). The blue dogs of Texas, while certainly odd, look nothing like this. That has not stopped the media from dubbing these hairless creatures as chupacabras, however. 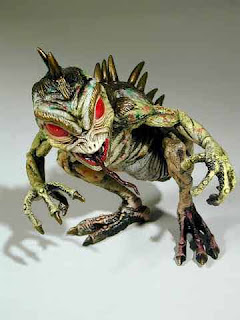 I have actually seen one of these blue dogs in the Sam Houston National Forest just outside of Conroe, Texas. A fellow TBRC member and I were returning from a camera maintenance trip in the Big Thicket National Preserve. Our route home took us through the heart of the SHNF. On a whim we decided to drive down a forest service road and take a look around. We had not gone very far when we spotted an animal in the road. As we got closer we were surprised to see a hairless creature somewhere between 18 and 24 inches high. The animal trotted across the road and into the forest. Once in the brush the creature froze. It was difficult to see in the shadows but stayed still for about a minute affording us a good look. The animal had bluish grey skin that resembled that of an elephant. It also had a long whip-like tail. It was a truly strange site. Strange as it was, however, the animal was clearly a canine of some sort. My guess is that it was a coyote with a terrible case of mange. It looked similar to an animal filmed by a police officer near Cuero, Texas a couple of years ago. You can view that video below.

Other animals have also been suffering from this condition (mange) of over the last few years. For example, the photo below is of a raccoon that has lost its fur due to a bad case of mange. 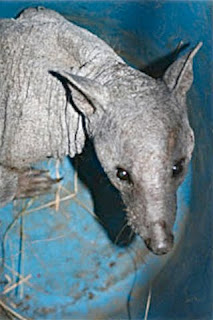 As you can see, it is very difficult to identify an animal that has lost its hair. The photo above does not look like a raccoon at all. Animals tend to look totally alien and more fierce without their fur. I haven't seen any evidence to date that makes me think these animals are the legendary chupacabra or a totally new species.

My best guess is that DNA tests on the "Oriental Yeti" will show the creature is simply an animal common to the region that is suffering from mange or some other skin disease. I do know for sure that it is not a yeti. The media labeling it as such is unfortunate.
Posted by Mike at 6:16 PM