It has been a little while since I posted. I have been very busy and had some computer issues. Hopefully, the computer problems have been rectified and I can get back to work. And on that note...

I pulled my game camera yesterday. It wasn't due to be serviced or removed until this weekend but I was anxious to see how it performed. This is a new digital model that I hope will be a big improvement over the old 35mm cameras I have used in the past. The camera was placed in what I call "Location 1". This is a spot where a woman claimed to have seen a large cat cross the road a while back. While I never captured a photo of a cat at this spot with the old 35mm camera I had out there I did get photos of quite a variety of wildlife. It is close to my house so it was an ideal location to try the new camera out. I did not want to go to too much trouble placing the camera in a hard to get to spot until I was sure it would perform well enough to be worth the trouble.

After I pulled the camera, I discovered it had snapped 18 photos in the 24 days it was in the field. This seems like a pretty good ratio to me as the old 35mm camera would typically snap only 4-10 pictures. The picture quality of the photos is good and I was impressed by just how far out the camera was able to sense movement. As expected, nearly all the shots were of white-tailed deer. I was pleased to get several shots with multiple deer. I never got photos of multiple animals using the old 35mm cameras. I have included some of the deer photos below. I have included shots that demonstrate the range of the camera, that show multiple animals, and some that I just like. 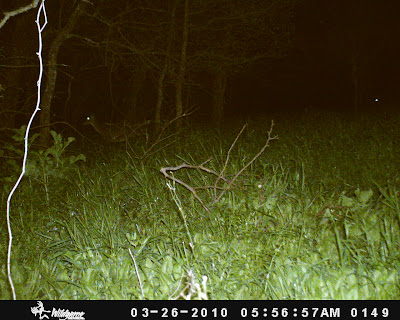 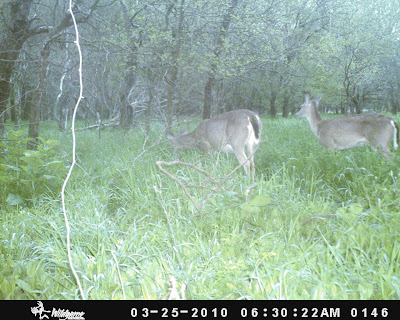 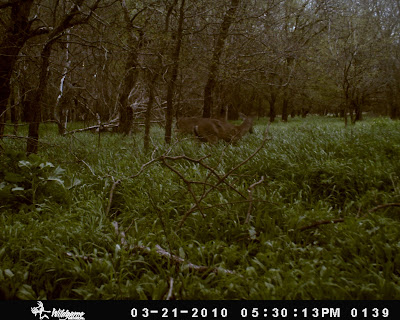 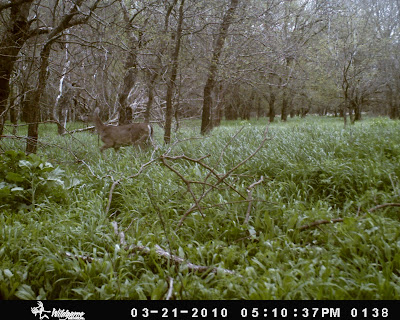 The jewels of the bunch, however, were two pictures of coyotes. In all the time I had the 35mm camera out in this same location I managed to capture only one picture of a coyote. In only 24 days in the field with the new digital model I got two coyote shots. It could be that no coyotes came by while the 35mm was out but it seems more likely that the old camera was missing shots. As I mentioned before, the 35mm never captured more than 10 images in the four weeks I would leave it out so it seems likely I was missing animals. The first picture of a coyote is my favorite. He's a healthy looking specimen and pretty good sized with a thick muscular neck. I initially thought the second photo was just the second in a series of photos of the same coyote. However, you will notice the time stamp shows that the second photo, while taken the same night, was snapped nearly two hours later. It is likely the same animal but, and this could be my imagination, the coyote in the second picture seems to have a bit more red in its coat. It also seems a bit smaller. This, however, could simply be a trick of perspective as the animal in the second photo is farther from the camera. In any case, I was very pleased to get these two shots. 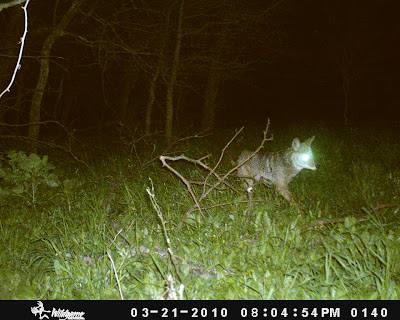 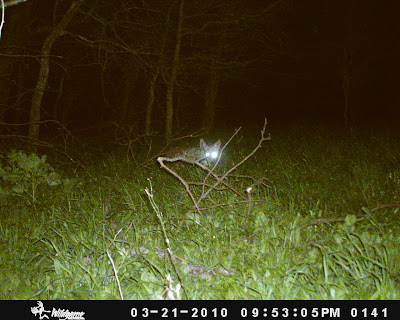 All in all, I am pleased with the performance of this camera. The images are good, the range is good, the price was reasonable, and it being a digital makes it head and shoulders above my old 35mm models. The one concern I do have is with the battery life. I will typically leave a camera out at least four weeks before checking them. This camera was out a little less than four weeks (24 days) and the batteries were dead when I arrived. Having to replace batteries more often definitely makes things more difficult. I can only get out so often. It will get even more difficult with the addition of more cameras. Then again, what else would I rather be doing?
Posted by Mike at 11:46 AM