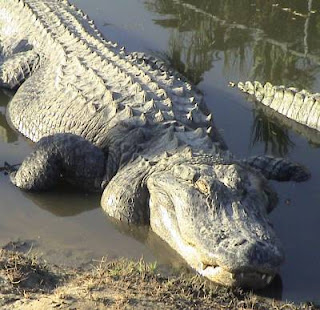 A six foot long alligator has been spotted in the Lampasas River north of Stillhouse Hollow Reservoir. The gator was seen twice by a local fisherman named Eric Dominowski last week. Dominowski put his boat in on the main lake and headed upstream to fish for spawning white bass and/or crappie when he spotted the gator. You can read the newspaper account, written by Mason W. Canales, of the sighting on the Killeen Daily Herald's website here.

Dominowski said, "It was pretty far upriver. Both times we were up there the gator was lying out there on the bank pretty close to the water...When we got up there he got into the water and we bolted out of there because we couldn't see him."

The fisherman was spooked by the alligator's presence and added that he had heard stories about their being present in the Lampasas and Stillhouse Hollow but never believed them.

Texas Parks & Wildlife game warden, Fred Churchill said, "It is not uncommon to have alligators there. Reports range in size from anywhere between four and ten feet." Churchill would add, "They are not a problem. There are no issues with them. They are just part of the natural habitat to be in the river...They are just cohabitating with all the other wildlife in the area."

I have lived in central Texas since 1987 and have always heard tales of alligators in local rivers and creeks. Most of those stories centered around Salado Creek, Stillhouse Hollow Reservoir, and the Lampasas River. Interestingly, I have never heard of anyone claiming to have seen an alligator in Lake Belton which is only five miles north of Stillhouse. According to Dan Thomasson, the Army Corp of Engineer Lake Manager for both Stillhouse Hollow and Lake Belton, reports of alligators have been coming in for 10 years. 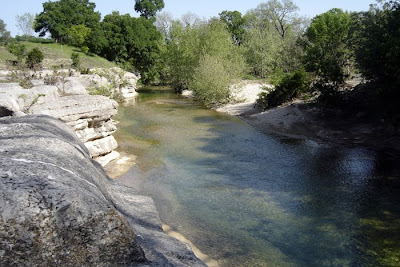 "The reports that we have gotten have all been in the river above the lake. We have never gotten reports of an alligator being in the main body of the lake," said Thomasson.

Game warden Churchill's statement about an alligator living in the Lampasas River not being anything unusual is accurate...sort of. If you look at the graphics below you will see that, while the area where this gator was seen is included as established alligator habitat, it is on the extreme western edge of where they are normally spotted. I would also submit that if the alligators are in the Lampasas River north of the main lake it is likely only a matter of time before they venture down to the reservoir itself. That is, if they haven't already done so. 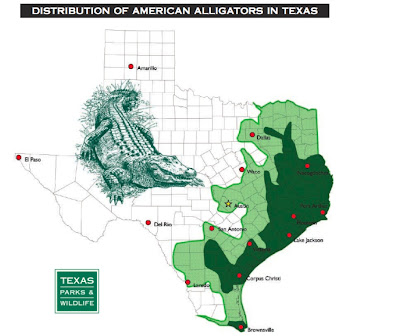 I would agree with Churchill's assertion that the presence of alligators in the Lampasas River, and even in the main lake, for that matter, is not a reason for concern. Use a little common sense and there should be nothing to worry about. As is the case with most wild animals, if you are aware they are around and take appropriate precautions you are unlikely to have any trouble. To the contrary, I think the presence of alligators in the area is a positive sign. It points to a healthy ecosystem.

So, fishermen, keep your eyes open and have those cameras ready. If you see any alligators in the central Texas area I would love to hear about it and would also be glad to post your pictures on this site.
Posted by Mike at 9:57 AM