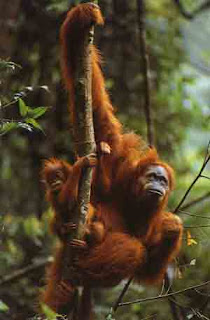 I've recently come across an article on the BBC News website that I found interesting. The article, written by Griet Scheldeman in August of 2009, details how wild orangutans in Borneo hold leaves to their mouths as they growl, scream, and/or vocalize in order to artificially deepen the sound of their voices. You can view the article here.

According to the article, the orangutans use this "leaf trick" when they feel threatened by a predator. It has been discovered the closer the orangutan holds the leaves to their mouths while vocalizing, the lower the frequency of the sounds they produce become. The deeper vocalizations are meant to fool potential predators into thinking a much larger animal is present and making the calls. The behavior was observed among orangutans when predators like snakes, clouded leopards, tigers, and in some cases, humans were in their immediate vicinity. The behavior was documented by an international team of researchers headed by Madeline Hardus of the University of Utrecht (Netherlands).

Hardus explains that the strategy is effective because predators often are unable to view the apes clearly in the canopy. "Because it is very rare and difficult to get a full view of an orangutan in its rainforest habitat, this could be very advantageous, since a potential predator will have to rely more on sounds than sight in these conditions," the Dutch primatologist said. Theoretically, a predator is going to be less likely to pursue a very large orangutan in the treetops. The risks to the predator outweigh the possible rewards in most cases.

Hardus also mentions that the behavior may be a sign of rudimentary language in the orangutans. She said, "This study clearly indicates that the abilities of great ape communication have been traditionally undervalued and that there may be traces of language precursors in our closest relatives, the great apes." Hardus added that the primate calling observed in the wild orangutans of Borneo is likely not an instinctual behavior but a socially learned one. The observation is important, as primates have been observed using tools to obtain food in the past but not to modify sound.

This study points out, yet again, just how intelligent are the great apes. Just in the last few years, stunning observations have been made of apes using tools to obtain food in clever and unusual ways. Wild apes have also been observed using various forms of communication such as had clapping and whistling while captive apes have even been taught sign language. It has also been shown that apes have the mental capacity to consider the future and even run mental simulations of possible scenarios to come. Add some of the unexpected, and until recently, never before seen behaviors such as grieving, swimming, and fishing and you have a picture of some incredibly intelligent animals.

The sasquatch, to the best of my knowledge, has not been observed using tools of any kind like chimpanzees and orangutans. Neither has the sort of behavior described in the BBC News article been observed by alleged bigfoot witnesses. So, what is the possible connection here between the orangutan behavior and North America's great ape? It is the possibility that at the heart of the orangutan behavior there are the building blocks of a rudimentary language.

There have been periodic reports of strange chatter and mutterings by sasquatch witnesses. The reports vary somewhat. Some, including a witness I interviewed two years ago, have report hearing what is often described as "samurai chatter." The witness I talked to said the animal vocalizations he heard sounded like something you would hear while watching an old Bruce Lee movie. Some of this "samurai chatter" has been recorded successfully. You can hear a sample of this type of chatter here and here. The sasquatch has also been observed making an unusual gurgling whistle. For example, Jeannie Chapman described this odd noise to Ivan T. Sanderson while relating the account of her famous Ruby Creek sighting. Sanderson wrote, "This is a sound I cannot reproduce in print, but I can assure you it is unlike anything I have ever heard given by man or beast anywhere in the world." Interestingly, muttering hominids have been reported in other parts of the world. The yeti of the Himalayas reportedly makes sounds that seem startlingly similar to true language. For example, Rupert Matthews, in his book Sasquatch: True Life Encounters With Legendary Ape Men, relates the tale of one Pang Gensheng, a 33-year-old farmer 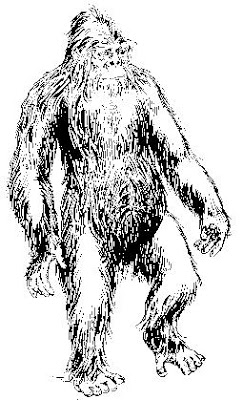 from Cuifeng who claims to have encountered a yeti in the summer of 1977. To make a long story short, Mr. Gensheng came face to face with a yeti, was backed up against a rock face as the creature approached to within 5 feet of him, and then won the "stand off" when he pelted the creature in the chest with a rock. The yeti turned and walked away, paused briefly to lean against a tree and look back at Mr. Gensheng, and then proceeded slowly toward the bottom of the Dadi Valley. As the creature retreated it rubbed the spot on its chest where the rock made contact and "mumbled" as it did so. The choice of the word "mumbled" is significant to me. Gensheng did not say it growled, moaned, or groaned. He said the yeti "mumbled." This, in my mind, implies that it sounded very much like a human language. These types of vocalizations, in my opinion, need to be categorized differently than the howls, whoops, and growls so often reported. If they truly occur, these vocalizations seem to be more intimate somehow. Could they be an attempt by the sasquatch to communicate in some way with the human witnesses? Could they actually be language?

I will admit to having some trouble accepting the "samurai chatter" at face value. Some of the recordings I have heard just don't sound natural to me. That isn't too scientific, I know, but my gut has served me well in the past. In the two recordings I provided links to above, for example, I have serious doubts that a sasquatch is responsible for the vocalizations on the second recording. The first recording is more intriguing to me. It sounds much more like an animal and I can at least entertain the possibility that an undocumented primate is responsible for it. What these vocalizations could possibly be trying to convey I can't say.

As always, there are many "ifs" and much speculation with no definitive answers. Hopefully, all will become clear in time.
Posted by Mike at 9:58 PM