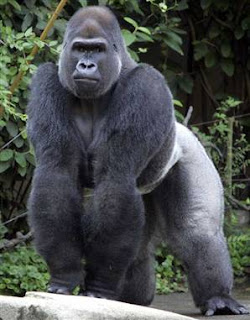 A new study conducted by The Max Planck Institute for Evolutionary Anthropology, in Leipzig, Germany, suggests that gorillas, long thought to be herbivorous only, may supplement their diet with meat. The article is on the National Geographic website and can be accessed here. I will do my best to summarize it below.

While some captive gorillas have been conditioned to eat meat there has never before been any evidence to suggest that wild gorillas engage in carnivorous behavior. Gorillas have only been known to eat plants, fruit, and insects. No hunting or scavenging behaviors have ever been observed. That remains true. However, this recent study discovered DNA from monkeys and duikers (forest antelope) in the feces of wild African mountain gorillas living in the Loango National Park in Gabon. This discovery strongly suggests that wild gorillas may, at least occasionally, supplement their diet with meat. Whether the gorillas are actively hunting or opportunistically scavenging carcasses is not known. In fact, according to one key participant in the study, neither of these things may actually be occurring at all.

Grit Schubert, co-author of the study, suggests a far more mundane explanation for the presence of the monkey and antelope DNA in gorilla scat. He suggests the possibility that the gorillas ate insects that had been feeding on the carcasses of dead animals. This, Schubert theorizes, could account for the presence of animal DNA in the gorilla's droppings. He points out that if gorillas ingest an insect, like an ant, that has been scavenging a carcass they are ingesting and then expelling the mammal DNA present in the insect's digestive tract. This mammal DNA could show up in the gorilla's feces even though it was indirectly ingested. Schubert also suggested the possibility that the DNA could have been left by live animals that probed the gorilla droppings for edible seeds or undigested bits of plants. "Other mammals might have licked it, sniffed it, or peed on it," he said. "There are plenty of opportunities for adding mammal DNA to gorilla scat after the fact," he added. " I don't think they are eating meat."

Great apes that eat meat are not unheard of by any means, however. It has been clearly documented that chimpanzees and bonobos eat meat. They actually have been observed stalking and hunting several types of mammals including, but not limited to, monkeys and wild hogs. Orangutans have been observed fishing. That being the case, I would not be surprised at all to find that gorillas, when the opportunity presents itself, occasionally eat other animals. The idea that herbivores are incapable of digesting meat is completely wrong. In the article, geneticist, and co-author of the study, Michael Hofrieter, also of the Max Planck Institute , correctly points out, "Most herbivores can digest meat quite well." He added, "It just doesn't work the other way around."

I agree with Grit Schubert's evaluation of the evidence to a point. I think the evidence that gorillas are eating other animals is too thin to draw a definitive conclusion at this time. However, I also feel Schubert is prematurely dismissing the possibility that wild gorillas may eat meat from time to time. After all, the entire scientific method is based on the premise that you develop a hypothesis and then test that hypothesis by observing the evidence. In this case, the body of evidence is too small to make a valid conclusion, but it seems to suggest gorillas do, indeed, devour meat from time to time. Schubert's protestations to the contrary seem to fly in the face of where the evidence is leading. Knowing what we do about the other great apes, is it so difficult to at least entertain the possibility that wild gorillas can be omnivorous? Future evidence may prove Schubert's statement to be correct but I think it decidedly unscientific to dismiss what the evidence, to this point, shows. I sense something familiar here; a pre-existing bias.

Mainstream science has long denied there is even the possibility that the sasquatch exists. Often, scientists would refuse to even look at evidence that had been collected. Why? Because they felt such a creature was an impossibility. No matter how intriguing the evidence might be it had to be invalid. After all, if the animal cannot exist it cannot leave trace evidence. Thus, all evidence must be hoaxed. This is about as unscientific as it gets. I may be reading too much into Schubert's comment but, like I said, it sounded painfully familiar.

If it turns out that wild gorillas are omnivorous it would remove one more piece of ammunition from those who have scoffed at reports of sasquatches being observed hunting or carrying deer, hogs, goats, etc. It was thought for years that the great apes didn't hunt and eat other animals. So, claims to the contrary were considered to be ridiculous. The years have opened our eyes, however, to what is really going on. As stated earlier, bonobos and chimpanzees actively hunt other mammals on a regular basis. Now we have evidence suggesting gorillas may do the same thing.

Those who doubt the existence of the sasquatch often make some valid arguments as to why they feel the way they do. It seems, however, that the argument "great apes are strictly herbivores and do not hunt" can no longer be considered one of them.
Posted by Mike at 9:38 PM