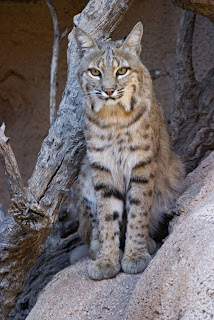 A story in yesterday's Houston Chronicle by Mike Glenn documents the capture of a bobcat in downtown Houston by animal control officials. The article can be accessed here. Video of the bobcat's capture from local television station KHOU can be viewed here.

To summarize, several people reported seeing a large cat in a parking garage located at 511 Rusk near the Bob Casey Federal Building. Officials were skeptical initially but responded to the calls anyway. "We thought it was going to be a house cat," said Chris Glaser, a supervisor with Houston's Bureau of Animal Regulation and Care.

To his great surprise, Glaser found a bobcat hiding under a car. The cat wasn't too keen on being captured but was subdued fairly quickly with the help of two tranquilizer darts. Glaser theorized that the bobcat might have come into the garage to sleep overnight.

After the bobcat was sufficiently tranquilized, Glaser examined the animal and found it to be a very healthy male weighing in at 25-30 pounds with a length of approximately 3 feet. Glaser said the bobcat had "good muscle tone," and "seemed in fine condition." After a thorough medical examination by BARC officials, the bobcat was loaded onto a truck and transported to Brazos Bend State Park where it was released. Brazos Bend State Park is located approximately 30 miles southwest of Houston proper.

The capture of a wild big cat in downtown Houston would seem to lend credence to the theory I've put forth on this site numerous times that these predators have adapted to living in close proximity to humans. Sightings of large cats continue to come in from surprisingly urban locations. Most large Texas cities do have at least one large water source and/or major river winding thru them. Dallas has the Trinity River, for example. Buffalo Bayou runs thru Houston, and is very close to the site where this bobcat was captured, and also has many other marshy areas and large creeks within its city limits. It is well accepted that rivers, bayous, creeks, etc. are used by wildlife as travel routes. These areas also feature extensive green belts that would not make hiding too difficult. Often, there are depressed areas within large cities with a large number of abandoned buildings. These building would, likewise, would be good places for a large cat to lay low as human traffic would be minimal.

I truly feel that big cats like bobcats and cougars are making the same adjustment that coyotes have made so successfully. That is, they have adapted to living in urban areas. These cities harbor large numbers of rats, feral cats, wild dogs, and pets that would make for an adequate prey base, at least temporarily, for a large cat. I firmly believe that at least some large cats have become quite comfortable in these areas and have taken up permanent residence.

One of my greatest fears is that a human will be attacked by one of these large predators. Likely, suburbia is quite safe. I think a far likelier attack scenario would be a poor homeless person who chooses the wrong wooded area to lie down in or the wrong abandoned building in which to seek shelter. Police department personnel, animal control officials, and the Texas Parks & Wildlife might seriously consider implementing some sort of effort to educate the homeless to the potential dangers of big cats in these urban areas and stress the importance of reporting sightings. Maybe a tragedy could be averted by taking such preventative action. This, however, would be a difficult undertaking and is unlikely to occur.
Posted by Mike at 2:04 PM