The Headless Horseman of the Nueces

Human kind has always been a superstitious lot. Tales of ghosts, monsters, witches, and other “haints” are universal and cross all cultural divides and borders. Especially terrifying are tales where the alleged spectre in question met his/her end in the most gruesome of ways: decapitation. Tales of ghosts cursed to search for their missing heads on this earthly plane abound. One such example of this particular mythos is the tale behind the ghost lights of Bragg Road in East Texas. Some who believe in such things claim the lights are tied to a long dead conductor or railway worker who slipped under the train that used to run along the road and lost his head beneath the wheels of a tanker car or caboose.  While all such stories are frightening, the terror seems to ratchet up a notch when the headless spirit is astride an equally ghostly horse. Images of Washington Irving’s Ichabod Crane fleeing for his life from the Headless Horseman of Sleepy Hollow are those most commonly dredged up from the minds of most when the topic is broached. But it is all in good fun, such things are just campfire stories meant to thrill and delight the younger members of families. Headless riders are not real.

Except when they are.

In the mid 1800s, not long after the Mexican-American War wrapped up, settlers around the Nueces River in South Texas began to report sightings of a headless horseman roaming the countryside. Witnesses claimed the rider, dubbed "El Muerto," carried his head (still wearing a sombrero) tied to the horn of his saddle. About his shoulders, the rider wore a brush-torn serape over a buckskin jacket. The legs of the apparition were covered by rawhide leggings of the kind worn by Mexican vaqueros. The horseman was always seen astride a black mustang stallion so wild it seemed to have erupted onto the Texas plains straight from the mouth of hell. The rider was seen both day and night and there seemed to be no pattern to when and where he might appear next. The only constant was that he always rode alone and brought a paralyzing terror to any unlucky enough to lay eyes upon him. The Indians of the region, who rarely agreed with the Anglo settlers on much of anything, concurred that the rider was real and endeavored to keep their distance from him. Tribes on the hunt for bison or wild horses would range hundreds of miles out of their way to avoid entering the territory of the headless spirit. 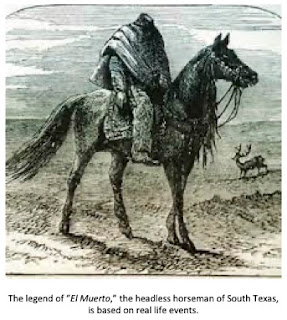 Mayne Reid, stationed at Fort Inge on the Leona River, wrote, “No one denied that that thing had been seen. The only question was how to account for a spectacle so peculiar as to give the lie to all known laws of creation.” Reid went on to list the many theories that had sprung up in an effort to explain the rider. An Indian dodge, a lay figure, a normal rider disguised with his head beneath a serape that shrouded his shoulders, and the possibility that the headless horseman was none other than Lucifer himself were the most common explanations bandied about by settlers and soldiers in the region. One theory not expounded upon by Reid was that the rider was the patron, or ghostly guard, of the lost mine of the long-abandoned Candelaria Mission on the Nueces River. The debate raged on but the mystery as to the rider’s identity remained.

Finally, a group of settlers – tired of being afraid – managed to ambush the headless horseman at a watering hole near the present day town of Alice. The rider seemed impervious to their firearms. One man in the posse said, “Our bullets passed through him as easily as through a paper target.” A change in tactics was in order and the settlers shifted their fire from the seemingly invulnerable rider to the black mustang. The horse, it seemed, did not share the rider’s ability to weather gunfire and was felled quickly. Upon inspection, the settlers found a desiccated human carcass – one riddled by bullet holes and arrows – lashed to the back of the mustang. The mystery was solved but it birthed another question: who was the headless rider?

It was learned some time later exactly how the headless horseman of the Nueces had come to be. The answer came from none other than legendary Texas Ranger Bigfoot Wallace himself. Years before, during the Texas Revolution, Texian militias laid siege to the city of San Antonio. On the night of December 4, 1835, a Mexican lieutenant named Vidal deserted, joined the Texians, and provided them with valuable intelligence that helped lead to the surrender of the city by General Cos (the Mexican military would later return and avenge their humiliation at the Battle of the Alamo). After the Texians won their independence from Mexico at the Battle of San Jacinto, Vidal took to stealing horses in order to make a living. He proved quite adept at this endeavor and became the head of several rings of horse thieves operating in South Texas. The Texians were slow to suspect Vidal – despite mounting evidence – due to his reputation as a Texas patriot. Vidal was able to further deflect suspicion by deftly planting evidence that suggested the Comanches – who often raided settlements and homesteads for horses – were the true culprits.

Despite his best efforts, a couple of ranchers named Flores and Taylor began to suspect Vidal of the thievery and struck out to follow the trail of the rustlers. While camping on the Frio River, Flores and Taylor met up with Bigfoot Wallace – not one to tolerate a horse thief – who decided to join the hunt. As they drew nearer to the stolen herd, the hunters came across cattle that had been shot with arrows. “Vidal’s trick to make greenhorns smell Indians,” Taylor wrote. The three men did not fall for the ruse and pressed on, finally catching up to Vidal and his men near the Leona, only twelve miles from Fort Inge. To make a long story a bit shorter, the three men sneaked into the rustler’s camp and made short work of Vidal and his men that very night. 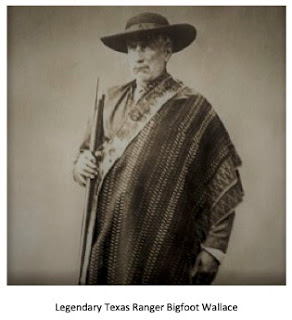 The next morning, Wallace – always a bit on the eccentric side – made a faithful decision. He chose a black mustang stallion from the recovered caballada, one that had been herd-broken but never saddled. Wallace roped the stallion, saddled him, and – after decapitating Vidal – lashed the horse thief’s body securely to the mustang. Wallace then laced Vidal’s head, sombrero and all, to the horn of the saddle. The three men then stepped back to admire their work. Before them, the lifeless and headless body of the king of South Texas horse thieves sat bolt upright on the back of a stallion so wild that Satan himself could not ride him. Bigfoot Wallace would declare years later that he had seen many pitching horses, but had never witnessed any other animal act like that black stallion with the dead horse thief on his back. After the mustang had pitched, bucked, snorted, squealed, pawed the air, and reared up and fallen over backwards, it seemed to accept its fate and fled into the Texas wilderness away from its tormentors and into legend.

It is often said that even the hardest to believe legends contain within them a grain of truth. Such is the case with the tale of the Headless Horseman of the Nueces. The witnesses were telling the truth; the rider was real. Perhaps it is a lesson we should recall when confronted with something that seems unbelievable today. Maybe we should pause before dismissing the outrageous claims of a witness who insists they saw a black panther, a wood ape, or some other creature that is not supposed to exist. Maybe we can treat those witnesses with respect and dignity and help them get to the bottom of what they saw.