Nowata County, Oklahoma would seem to be a strange place for a furor of almost any kind. It is a sparsely populated place and the good people who make the county their homes are hard working salt of the earth types who do not cotton much to nonsense and, even if they did, there just are not very many of them to get worked up. According to the 2000 U.S. census, only 10,569 souls make their home in Nowata County. That works out to only 19 people per square mile. No, a furor of any kind would seem unlikely here. Yet, a furor is exactly what occurred in this northeast Oklahoma county in late 1975, a time when even fewer people lived in the area, when residents reported several encounters with a large, hair-covered, bad-smelling creature that would soon be dubbed the Noxie Monster by the local media.

At approximately 8:00 p.m. on September 1, 1975, a farmer named Kenneth Tosh heard some odd sounds emanating from an abandoned home adjacent to his property. Tosh and a friend went to investigate what they later described as having been an odd scratching sound. The pair, unable to see well in the waning daylight, claim to have walked up to within 10 feet of a dark brown, hairy creature that stood 7-8 feet tall. The creature fled upon being seen. Tosh, along with many others in the area, claimed to have seen the creature multiple times over the next 60 days or so and even say they shot at it on more than one occasion. Each time, however, the creature, whatever it was, fled at high speed, seemingly, unaffected by the gunfire. 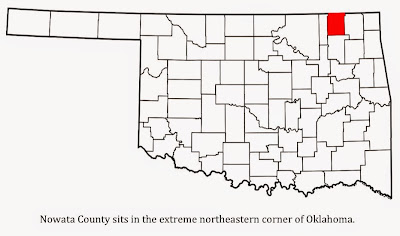 “I was within 10 feet of it before I saw him, “ Tosh was quoted as saying to the Tulsa Tribune at the time, “He growled and ran one way. I screamed and ran the other. I was in (Vietnam) 13 months and I’m more scared here than I was over there.”

The media was whipped into a frenzy by the spate of sightings. The Patterson-Gimlin footage was less than 10 years old and bigfoot was big news. Both newspaper and television reporters descended on the area, trying to get the scoop on Nowata County’s very own monster. For a while, Noxie was the cryptozoological center of the universe. Much to the chagrin of the locals, many papers and television stations treated the story as nothing more than a fluff piece, something to print on the back page or to fill the last 2-3 minutes of a news broadcast. This treatment caused some witnesses to stop talking but, fortunately, enough media treated the story respectfully that the information kept flowing.

Tosh’s story was taken seriously by local law enforcement, at least initially. Nowata County undersheriff Harold Lay told the Tulsa Tribune, “I don’t know what they saw, but they sure saw something.” Lay related several similar accounts from residents in the area that seemed to confirm that something matching the description given by Tosh was, indeed, roaming the county. In fact, between the Nowata County law enforcement officials and bigfoot hunter Hayden Hewes, who had come to the area to investigate upon hearing of Tosh’s sighting, no fewer than 24 people were found claiming to have seen and/or heard the Noxie Monster during September and October of 1975. 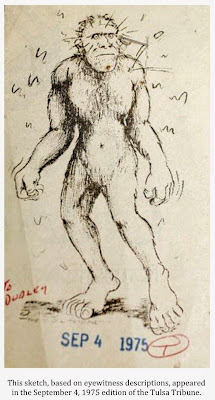 While the flap of monster sightings in 1975 was shocking to most, it was not the first time a hair-covered creature of enormous size had been seen in Nowata County. Several sightings of creatures similar in appearance to the description that would be given by Kenneth Tosh years later, were reported by locals in the early 1900’s. The most well known of these encounters occurred in 1915 when a man named Crum King spotted a huge, hairy, man-like creature outside of his property gate upon returning home from a dance. King described the figure as 5-6 feet tall, covered in hair with a chest about 4 feet (whether he meant across or in diameter is unclear). He claimed the creature “stood with its arms stretched out.” King found the posture of the beast less than inviting and fled the scene quickly after spying the figure.

Despite similar historical accounts from Nowata County’s past, and the fact that at least two-dozen residents claimed to have seen the beast, interest in the Noxie Monster waned as the sighting reports dried up. Eventually, those who claimed to have had an encounter with the monster became the subject of ridicule.

Kenneth Tosh was having none of it. “I’m getting mad. Everybody’s laughing at us and thinking I’m crazy because I’ve seen that thing,” he said. “I don’t care what people think. I know I saw something. I’m scared and I’m going to shoot it.”

Despite his best efforts, Kenneth Tosh never bagged the creature. Now, nearly 40 years later, the Noxie Monster is nothing but a distant memory, a story to tell around the fire to the kids so that they do not wander too far from camp or home. Only the oldest residents of Nowata County recall the time in 1975 when they were not allowed to play outside past dusk and always had to stay within the line of sight of one of their parents. A time when their tiny community was the epicenter of all things bigfoot. The monster was all too real then. They are also the only ones left to wonder if the creature will ever appear again. 60 years passed between the sightings of 1915 and the flap of 1975. Maybe it could happen again. Most in and around Noxie scoff at such a notion.

After all, Nowata County is hardly the kind of place where any sort of furor would take place.