The sound of wood on wood or rock on rock echoes through the woods. Those who hear the sounds usually ignore them and write them off as nothing more than the activity of overzealous woodpeckers. Most never really take note of the knocks at all and consider them just a normal sound sometimes heard in the forests of North America.

Another knocking sound echoes through the forest. This time the sound originates from a different location. Again, if the sound is noticed at all, it would elicit little more than a shrug of the shoulders from most. Campers, hikers, hunters and the like are usually deeply engaged in their activity of choice and never stop to think about what animal of the deep woods would be capable of banging a stick or rock against a tree trunk. If the question ever did cross their minds, they would realize there is only one answer to the question: there are none.

None that have been recognized by science, anyway. 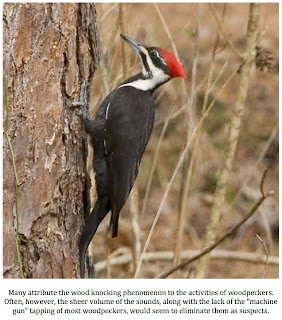 For untold years, people living, working or spending time in the most remote and heavily forested regions of the world have reported hearing strange knocking, banging and clanging emanating from deep woods where it can be safely assumed there are no human beings. If humans can be ruled out, what else could be responsible for these sounds? Hands are required to pick up a stick or rock and bang it against a tree trunk. Not paws, hands, a conclusion most people find quite unnerving.

None other than Theodore Roosevelt himself was unnerved when he experienced the strange knocking phenomenon while paddling and charting the Amazon tributary known only as the River of Doubt in 1913-14. The trip was difficult and miserable. The morale of Roosevelt and his party was deeply affected by the strange noises that seemed to follow them down the river. Candice Millard, author of The River of Doubt: Theodore Roosevelt’s Darkest Journey, compared the sounds the former President and his men heard to sounds described by British Naturalist Henry Walter Bates in the mid 1800’s while he was exploring the same region. Bates described many odd jungle sounds but one in particular caught my attention.

Bates wrote, “Sometimes a sound is heard like the clang of an iron bar against a hard, hollow tree, or a piercing cry rends the air: these are not repeated and the succeeding silence tends to heighten the unpleasant impression which they make on the mind.”

While the words above were not Roosevelt’s, they described closely sounds he, and the rest of the men heard many times during the rainy season of 1914. The words used by Bates to describe what he heard sound startlingly like descriptors used by hunters, campers, hikers, and naturalists from all over the globe who have heard knocks, clangs, howls, and screams they cannot attribute to any known animal. Clearly, these sounds have been reported by a very long time. What could they mean?

“Wood knocking” as the phenomenon is often called, is something sasquatch enthusiasts and researchers have been intrigued with for decades. Odd knocks, sometimes accompanied by strange howls, grunts and growls have been reported in association with alleged wood ape activity/sightings many times. Others have reported having had rocks thrown at them, their cabins or tents and seeing vegetation shaken violently soon before or after knocks or clacks are heard. For years, mainstream scientists dismissed these claims as being too fantastic to possibly be true. With each passing year, however, the behaviors reported for so long by alleged wood ape witnesses seem to fall less into the category of the fantastic and more along the lines of accepted and observed great ape behaviors. It has now been established that great apes do drum or beat on trees. If the North American wood ape is an undiscovered species of great ape, as I believe it to be, it would not seem too far-fetched to posit that they, too, would engage in this knocking/drumming behavior.

The first question to ask is why do great apes, any of them, engage in this drumming or knocking behavior? Many interested in such things surmised that these sounds might somehow be associated with food gathering activities. A 2009 article published in the International Journal of Primatology reported on the discovery that chimpanzees living in the jungles of the Republic of Congo actually crafted clubs from branches to pound the nests of bees in order to gain access to the honey found therein. Primatologists have long been aware that chimps love honey and will go to great lengths to get at it. Previous studies have noted how these apes fashion and shape sticks to dip into or pry open nests. However, until now, no one knew just how far chimpanzees would go to gain access to this honey. Dr. Crickette Sanz, of the Max Planck Institute of Evolutionary Anthropology in Leipzig, Germany, said, “It seems these chimps in central Africa have developed more sophisticated techniques for getting at the honey than populations in eastern and western Africa – maybe it is some kind of regional feature.” He added, “These nests are tough to get into – they can be at the top of the forest canopy, at the end of a branch – and the chimps will go up there and hang at all sorts of precarious angles to get to the honey, using these clubs in any way that they can to access it.” Video footage, taken over four years of observation by the researchers, shows the chimpanzees pounding these concrete hard nests 1,000 to 1,500 times. Researchers observed some chimps take well over 1,000 swings in the morning, stop and rest several hours, and then return in the afternoon to take another 1,000, or so, swings before finally breaking through and gaining access to the sweet honey. It is possible that at least some of the knocks heard in the forests of North America could be associated with food gathering activities as well. Members of the North American Wood Ape Conservancy have heard not only wood knocking (the sound of wood striking wood) in their main area of study but what is often described as rock clacking as well. 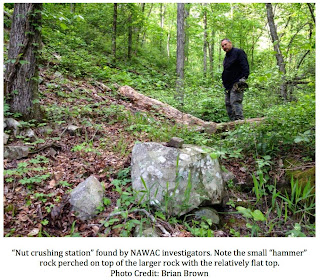 It was long assumed by members that this rock clacking (the sound of two rocks banging together) was simply another method used to accomplish the same goal, whatever that might be, as that of wood knocking. Food gathering as a possible reason for the phenomenon came to the forefront when several “nut cracking stations” were located along a rock strewn creek bed lined by huge hickory and black walnut trees. These stations consisted of brick-sized "hammer" rocks sitting atop larger rocks. The pulverized remains of hickory nuts and their shells were found on the tops of the larger rocks and stuck to the bottoms of the brick-sized rocks. Additionally, the ground around the bottom of the large rocks was found to be littered with what seemed like an abnormally high number of nut shells. Oddly, one station was littered with hickory nut remains despite the fact that there were no hickory trees within several hundred yards, seemingly, indicating that the nuts were transported to that particular spot solely for the purpose of cracking them open. Chimpanzees have been filmed engaging in this very activity.

Food gathering purposes may account for some knocking, drumming or clacking noises heard but this explanation does not seem to fit the bill some of, if not most of, the time when these sounds are heard. Many knocks are solitary in nature. In other words, only one or two loud knocks are heard at a time. Sometimes, these knocks are repeated at intervals ranging from a few minutes to an hour. At other times, a knock is heard and is followed by another knock coming from an entirely different location in short order, seemingly, indicating the presence of multiple individuals. These types of knocks are heard much more often than the repetitive, often rhythmic, banging that might be associated with food gathering activities and lend credence to the opinion held by many that these sounds are a form of communication between members of the species. A recent study of chimpanzees headed up by psychologist Katie Slocombe of the University of York seems to support the idea that drumming and knocking, often in association with pant hoots, is indeed a form of communication. 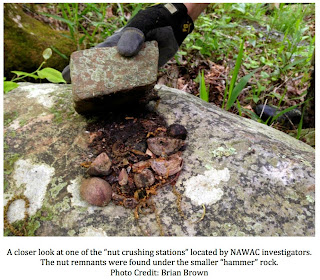 Slocombe and her colleagues studied a group of 13 male chimpanzees in the Budongo Forest Reserve in Uganda. The goal was to find out why some chimps drummed and hooted some of the time and drummed without vocalizing at others. The study also sought to find whether drumming rhythms were individually distinctive. The scientists studied 293 instances of drumming and/or hooting and came to some interesting conclusions.

“The sound they create makes it ideal for long distance communication,” said Dr. Slocombe. “We think drums help coordinate movement and grouping patterns, so advertising to others your location when traveling may entice others to join you, and other chimps may pant hoot and drum back, which may influence where the caller decides to travel to.” Dr. Slocombe summed up the study by stating, “We conclude that drumming patterns may act as individually distinctive long-distance signals that, together with pant hoot vocalizations, function to coordinate the movement and spacing of dispersed individuals within a community.” 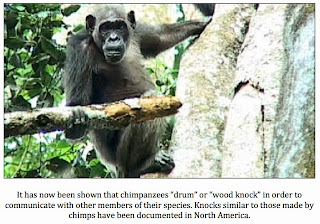 If, indeed, an undiscovered great ape lives in the most rugged, remote and inaccessible areas of our continent, the ability to communicate over long distances would be key to survival. Whether the knocks heard in the forests of North America represent the efforts of an individual seeking a mate, food gathering activities, aggressive warnings to interlopers or the leader of a clan keeping track of and directing the movements of family members, can only be speculated upon at this time. Depending on the circumstances, any of these possibilities could be the motivation for a particular knock or series of knocks. I do believe the correlation between the wood knocks of North America and the drumming behavior of the Ugandan chimpanzees described by Dr. Slocombe is obvious.

It is true that, to my knowledge, no one has ever witnessed a wood ape striking a tree with a branch or banging two rocks together. My own experiences, and those of my fellow NAWAC members, have led me to conclude that not only do these animals exist, they engage in the wood knocking/drumming behavior described so often, by so many, across North America and the world. Proof? No, not yet; however, the anecdotal evidence continues to pile up and is becoming increasingly difficult to ignore.

The next time you are spending time in the wilderness pay attention to the sounds of the forest. Something might be sending you a message