I made a trip out to check on one of my game cameras yesterday. The camera is located on private property in Ellis County, Texas where some odd goings on have been reported. The property owners have spotted two large cats, one tawny-colored and one black, on their land and have had several of their horses suffer injuries that they suspect were caused by run ins with a predator of some kind. The family has also found scat that looks suspiciously like that of a black bear and heard some odd clicking, moaning and growling from wooded areas adjacent to their home. Possibly the strangest thing to have gone on at this location is the disappearance of peaches from trees on the property. In two of the last three years, last year being the exception as a terrible drought prevented the trees from blooming, the trees have been quite prodigious. In fact, the trees have produced at such a rate that the property owners could not keep up. Peaches littered the ground and the branches were heavy with them. Each of these good years, the property owners returned from work one day to find the peaches gone. Not only were the peaches on the ground gone but the trees were completely stripped of fruit as well. For all of these reasons, the spot is an area of interest to me. 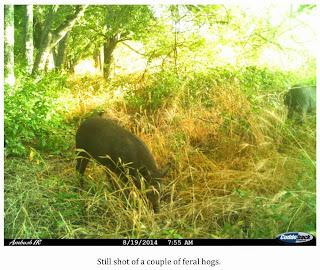 I was anxious to check the camera, as it is a brand new Cuddeback Ambush IR model on its maiden voyage. I have owned several older Cuddeback models in the past and they have been workhorses for me, providing years of service. They would likely still be working for me except I deployed them in a dry creek bed in Central Texas a while back and they fell victim to a flash flood event. The creek bed was a virtual wildlife highway and I got hundreds of great photos from the spot but a rain event in August of last year, pretty unusual in these parts, took them out. I’ve been attempting to rebuild my camera arsenal ever since but progress has been slow. In any event, I was anxious to see how the new Cuddeback performed.

I was a bit disappointed in the lack of events recorded by the camera. I got only a handful of shots/video of feral hogs and a coyote. The quality of the images was fine, however, and left me encouraged for the future. I downloaded the images on my laptop, refreshed the batteries and redeployed the camera in the same spot thinking that six weeks was not a fair enough sample size to determine whether it was going to be productive. After redeploying the camera, the property owner and I stared making our way back toward the house so we could take a look at what kind of images we had. That is when things got interesting. 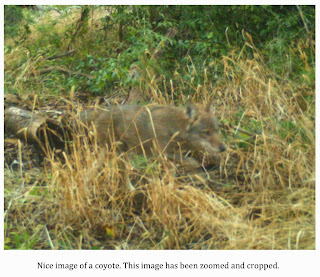 We had walked approximately 150 yards back to the north of the camera location when I stopped to examine a game trail cutting back to the west. While I was looking for sign, I heard what sounded like a very large animal crashing through the brush back close to the location of the camera. I turned to look but saw nothing. The property owner had lingered behind me as I checked the trail and did report seeing something. She reported seeing something large and gray fly or drop out of a tree back in the spot from where we had just been moments before. She could not give many details as it happened quite fast but said the object was substantial. We immediately returned to the spot but could find nothing on the ground in the spot or surrounding area matching the description of what she says she saw. She was adamant that she saw something gray and big come from the tree or out of the tree line and land on the ground. She did not see any sort of movement after the event that would indicate an animal of some kind came out of the tree and then moved away. It should be noted at this time, however, that the grass is quite high in the spot and something low to the ground likely could escape detection quite easily by hugging the ground. I really do not know what else to say about the incident. It occurred exactly as recounted. As I said, I did not see the object but clearly heard something large. Other than that, I cannot really speak to what it might have been. After looking around for another 30-45 minutes, we made our way back to the house. 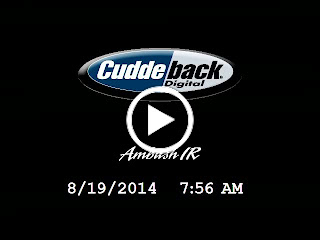 As I mentioned previously, I did not capture very many images on this set. While this was disappointing, I was pleased with the image quality of the photos and the video that was captured. Even though nothing unusual was photographed or captured on video, I have included the images here for your inspection.

I will continue to monitor the situation in Ellis County. I have two Reconyx cameras currently in the shop and hope to have them back by the time I refresh the Cuddeback in 4-6 weeks.