Daniel Perez, editor of the Bigfoot Times, has published a review of my new children’s book, Patty: A Sasquatch Story, in the March edition of the newsletter. Thankfully, he had good things to say. The review is below.

"Michael Mayes and his illustrator, Robert Swain, have produced a wonderful 52 page paperback book for young adults titled Patty: A Sasquatch Story, released in January of this year. The illustrations are extremely well done and bring the story to life. Patty has small feet and ends up leaving her tribe and striking out on her own. She befriends an owl, meets up with two cowboys and eventually finds her way home. The Sasquatch Insider, an appendix, is very interesting. Unfortunately, no where in the book do we find out who coined the nickname of “Patty.” Think Dmitri Bayanov!" 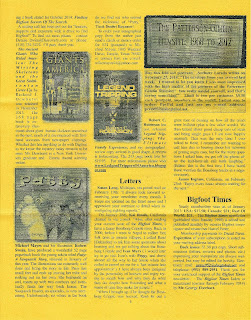 Daniel’s only criticism of the book was that I did not explain who coined the nickname “Patty.” This is fair and, if I could do it again, would include the fact that Mr. Bayanov came up with it in the "Sasquatch Insider" section. To be fair, I do say that the female sasquatch filmed in 1967 was nicknamed “Patty,” in tribute to Roger Patterson, on the back cover. So, I didn’t skate over this altogether.

My reason for not explaining the origin of the name in the book is actually pretty simple. My protagonist needed to already have a name for the beginning of the story. I couldn’t figure out how to name Patty for the cowboy in the story when the tale begins before she ever meets up with him. So, to simplify things, I just gave my young sasquatch the name “Patty” from the beginning. Call it “artistic license,” lol.

If you would like a copy of the story for yourself, or to donate to your local elementary or city library as part of my “Kids Love Cryptids” reading campaign, just check out all online book sellers (Amazon, Barnes & Noble, etc.). I’d recommend doing a search by the title of the book and shopping around a bit as prices vary day to day and site to site. Electronic versions of the book for the Kindle, Nook and other devices are also available. If you’d like to order an autographed copy directly from me you can contact me directly at mikemayes44@yahoo.com and I’ll get you the details on how to do that.