I came across the photo below yesterday and thought I’d share it here. It seems the picture was an online entry in a trailcam photo contest. The photo shows a nice buck all bowed up in a defensive posture as a very large, and very dark, cat eyes him menacingly. According to the information on the photo, it was taken in December of 2007. The site said the photo was taken near Tenaha in deep East Texas. I see nothing in the photo to make me believe it is not legitimate. 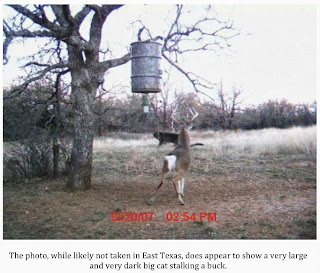 The one problem I have with the photo is the claim it was taken near Tenaha. I’m from deep East Texas and this doesn’t look like that area to me. The dirt in that part of the world is a deep reddish-orange (due to high iron content). Also, Tenaha sits in the Piney Woods region of Texas. There’s nary a pine tree to be seen in this photo. These are hardwood trees that have dropped their leaves. Certainly, there are areas where hardwoods grow in that area but the fact that there is not a single pine present really makes me believe we are not looking at East Texas.

Even if the location is incorrect, we should not lose sight of what is important here. In the big picture, what matters is WHAT we are looking at and not so much where the photo was taken. Don’t get me wrong, the location is important. I’d certainly want to know if a cat that size was on my property, but the critical factor here is the size and dark coloration of the cat. Remember, according to wildlife officials, there is no such thing as a “black panther” anywhere in the United States. Jaguars, which do exhibit melanism on occasion, rarely cross our southern border (though sightings in Arizona and New Mexico are becoming more common) and there is not a single documented incident of a melanistic mountain lion. These facts are what make this picture so interesting. There aren’t supposed to be black, or very dark, cougars out there. 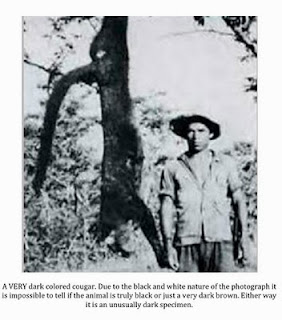 This is, at least in my opinion, clearly a cougar. I think you can plainly see that in the zoomed in and cropped photo below showing a close-up of the head of the cat. If so, it is an unusually dark specimen. To be sure, there are many variations in the shades of coat colors on mountain lions. Some are darker than others. The time of year, no doubt, also comes into play. Maybe the thicker winter coat this cat would be sporting in December is darker than the lighter summer coat. Speculative to be sure, but there is no arguing that, if this is a mountain lion, it is an unusually dark specimen. Could lions like this be the culprits responsible for the multitude of black panther reports in Texas and other parts of the U.S.? Certainly, it wouldn’t be too much of a stretch to think a witness would describe the cat pictured as a black panther. Maybe the question that should be asked is, if cougars can get this dark, could they get darker still? If so, then we have a prime suspect in our ongoing black panther mystery. 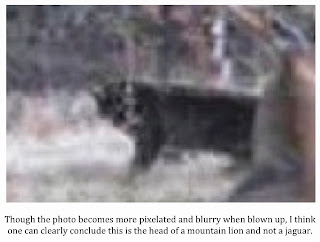 Personally, I don’t think dark cougars can completely explain the black panther phenomenon. Though they may not be as rare as previously thought, mountain lions this dark are few and far between. Dark colored lions may be out there but I think there has to be another component to the mystery considering the number of sightings reported annually.

Just what that other component might be is anyone’s guess.