The Strange Case of the Copperas Cove Cavy

I’ve heard 3-4 reports of an odd animal being sighted in the Copperas Cove/Kempner area over the last six months. The animal in question has been described to me as looking similar to a jackrabbit but… "different.” Another alleged witness described the creature she saw as looking like a small kangaroo. I was intrigued but with no photos to go on and only the most general idea of where the animal might be lurking, there wasn’t much I could do. Predictably, as more sightings were reported, rumors ranging from the humorous (jackalope) to the fantastic (chupacabras) began to make the rounds. Whatever this mystery animal was, clearly it was something with which most people were not familiar.

Most stories of this sort never come to any sort of definitive conclusion. There is a flap of sightings and then they stop. People are left to wonder exactly what was going on. Fortunately, this time, that is not the case. It appears the identity of the mystery animal of Coryell County has been discovered.

The animal in question? A Patagonian Cavy. 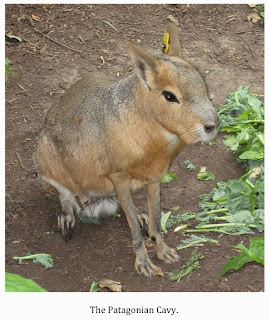 According to a story in this past Sunday’s Temple Daily Telegram, the cavy was captured in late October by a Copperas Cove resident who then turned the out of place rodent over to Mike and Amanda Vaughn who own a pet shot in the area. Vaughn said he received a call from a local who thought she had captured a wallaby. When Vaughn went out to investigate, he discovered she had actually captured a cavy.

The Patagonian Cavy (Dolichotis patagonum) is native to the Patagonian Steppes of Argentina. They are relatives of the common guinea pig and the more well-known capybara. They are classified as near threatened. Hunting, the animals are killed for their meat and skins, and the introduction of domestic sheep within their habitat are the two main factors in the shrinking number of cavies in the wild. The animals gained popularity as exotic pets after being featured on an episode of Sir David Attenborough’s “The Trials of Life.” It was, however, quickly found that these large rodents make poor pets. They tend to panic around people and crash about. Injuries to themselves and owners are common. In addition, most vets have no idea how to treat one of these creatures and their dietary needs are difficult to manage. Many owners quickly gave up on the idea of having a cavy as a pet. As so often happens, irresponsible owners began to turn these creatures loose. I have no doubt that some of the sightings of chupacabras and kangaroos around the country were actually of cavies. The famous “Tulsa Kangaroo Incident” falls into this category. 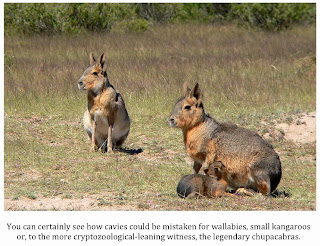 How this particular cavy wound up in Copperas Cove is still up for speculation. When captured, it had a large boil behind its shoulder blades. When the Vaughns treated the boil they discovered a 4-inch tranquilizer dart embedded in the animal’s flesh. The Vaughns removed the needle and treated the infected area. The cavy, named Pepper, seems to be doing fine now and the Vaughns are seeking a permanent home for her. Just who would be shooting a tranquilizer dart at a South American rodent in Eastern Coryell County is a story I’d like to unravel.

I guess chupacabras fans will be disappointed to learn that the infamous goat-sucker is not responsible for the rash of strange sightings over the last few months. I don’t fall into that group. While the Patagonian Cavy doesn’t qualify as a cryptid in the strictest sense, it is inarguable that it is an out of place animal and the whole incident makes for a very entertaining story. County and wildlife officials, might want to remind themselves that there actually was a real flesh and blood animal behind the strange sightings being reported. Maybe it wasn’t the mysterious animal many assumed but it was a real animal, nonetheless. Hopefully, they will recall the strange case of the Copperas Cove Cavy the next time someone reports something that seems too weird or fantastic to be true.

If they do, there is just no telling what they might find.