I mentioned a week or two ago that I’d received several really good emails of late that I would be sharing.

I have become acquainted with Sean Whitley over the last few months via Twitter. For those of you for whom that name is not ringing a bell, Sean is the writer and director of “Southern Fried Bigfoot”, one of the handful of good documentaries out there on the subject. My communications with Sean had been very brief, due mostly to the limitations of Twitter, so I was very pleased to open my inbox on January 12th and see he had taken the time to write an email. I was mildly surprised to find that the subject of the email was not wood apes but, rather, black panthers. Sean’s email is below:

Can't recall if we ever met in person or not, but if not, I'm Sean, the director of "Southern Fried Bigfoot."I saw your posting about black panther sightings and though I'd share the following.

Between the summer of 1980 and the spring of 1981, my family lived in the town of Porter, which is about 40-60 miles northeast of Houston if memory serves me correctly. It was fairly wooded, and the relatively new housing development we lived in was surrounded by woods. The neighborhood built a small playground for the kids and when we all started to ask if they'd ever put in a pool, I can remember one kid mentioning that his father said no because "panthers would pee in it." 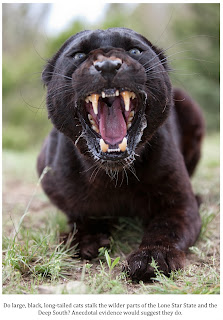 In the early 1980s, I used to go fishing with my late grandfather in various parts of East Texas. I can recall him mentioning black panthers either around the Sabine River bottoms and areas near Lake Tawakoni. I never found out if he'd ever seen one, but he talked as if he knew they were there.

A few years back, I was involved in a potential TV project and got Chester Moore, Jr. involved. Unfortunately the network passed after the sizzle reel was completed. However, we both heard some incredible stories from folks who claimed to have had first-hand encounters. A vet near Tyler told us she saw a large black panther cross her path on a rural road one night. Just east of Tyler, two homeowners in a rural area told us how they came upon a black panther trying to attack goats held in a pen on their property. Their approaching car lights scared it off, and the next day, they took photos of paw prints they found. Finally, some fishermen at a bait shop on Caddo Lake told us they've heard screams in the woods that they knew came from panthers.

I've got a college friend whose father owns hundreds of acres of private land near Mount Pleasant. In fact, we used his ranch as a location for the suit shots in "SFB" since we needed a safe place where our ape-suited actors wouldn't get shot at by passing hunters. While my friend's dad didn't see a black panther, he claimed he and his wife saw a mountain lion on the property on two different occasions. The wife saw it first as it bounded across one of their pastures one day, and my friend's dad scoffed. However, he saw it himself the next day. The interesting thing is that this man is a big game hunter who's hunted in Alaska and Africa. He's got stuffed bears, wolves, and antelope in his home. He knows the difference between a bobcat and a mountain lion. He also told me there had been attacks on livestock in areas near his home that sound like big cat attacks.

Anyway, thought I'd share. Keep up the good work with the blog.

Sean’s experiences talking about this subject with the people of East Texas mirror my own experiences and firm up my belief that there is an actual biological basis that explains sightings of large, black, long-tailed cats in Texas and across the South. Sean’s discussion with his college friend’s Dad in which the gentleman discusses seeing a mountain lion also supports my believe that these cats have made a big comeback in the eastern portion of the state. 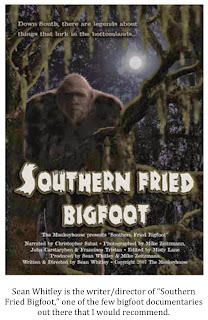 Keep your eyes open, folks. Have your cameras with you when you are out and about. If you have the means, I’d recommend strapping on a GoPro so you don’t even have to think about snapping a photo. If these cats are out there, and I truly believe they are, then it is only a matter of time before a legitimate photo surfaces.

Let’s see if we can speed up the process.

*To get a copy of “Southern Fried Bigfoot” visit www.southernfriedbigfoot.com