I trekked back to my old stomping grounds in SE Texas for the Thanksgiving holidays last week. I had not been back for several years and really enjoyed visiting with family and driving around my old hometown. It is always fun to see what has changed and what has not and to visit people and places that were very important to me as I was growing up.

Another good thing about the trip is that I was able to visit the location of an alleged wood ape sighting that was reported back in February. The sighting was reported by a Nederland man named David Arceneaux. He claimed that he spotted two wood apes across from Block Bayou while he was visiting Oak Bluff Cemetery in Port Neches in December of 2012. Arceneaux said he visits the cemetery roughly once per month to tidy up the graves of a friend and a family member. He claims he has done this for years without incident. This December day was destined to be different. The account of David Arceneaux is below as it appeared in the Port Arthur News: 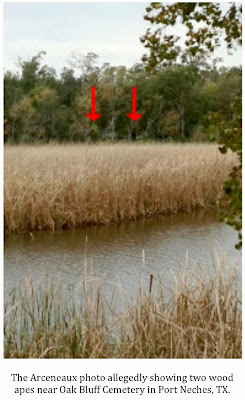 What he saw next amazed him. Two Bigfoot-like creatures that had been throwing rocks in the water looked across at him and the unknown female. One was standing next to a tree, arms around the trunk and the other was squatted down. As the second creature rose from the crouching position Arceneaux estimated the creature was about eight-foot tall. So he snapped a photo with his phone, he said. 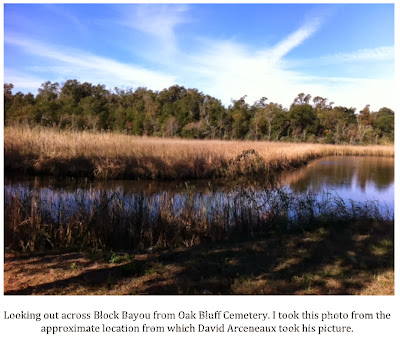 Arceneaux said he spoke to a game warden, describing the situation, and was told there had been other sightings along the Neches River. Calls placed to a local game warden were not returned by Tuesday afternoon.

The cemetery the witness was visiting is well known regionally as it is the final resting place of country crooner Tex Ritter. The area used to be a popular "parking" spot for teenagers back in the early 80's. Just back to the east is the allegedly haunted Sara Jane Road (E. Port Neches Ave./Atlantic Rd.) where all manner of odd things seem to occur. The area is not the first place I would think of when it comes to sasquatch sightings. Still, there have been a few reports along the Neches in this area (though they've occurred on the north bank) and it is not far from Orange and Newton Counties, which do have a rich history of such sightings. The photo is interesting but, like almost all the others allegedly showing these creatures, too fuzzy and indistinct to be proof of anything. That being the case, I needed to visit the location myself.

I made the trip out to Oak Bluff on Saturday before making my way home to Central Texas. I was going to try and stand in the exact spot from which Mr. Arceneaux took his cell phone pictures but was not able to quite get there as there was a burial service taking place nearby. Not wanting to intrude or to be a distraction, I kept a respectful distance from the service. While I did not get to the exact spot, I was pretty close. I think my photos show that. I also know I must have been close as there were at least a half a dozen “No Trespassing” signs up in a very small area that I had never seen before. No doubt, these signs were posted to keep bigfoot enthusiasts away from the area. 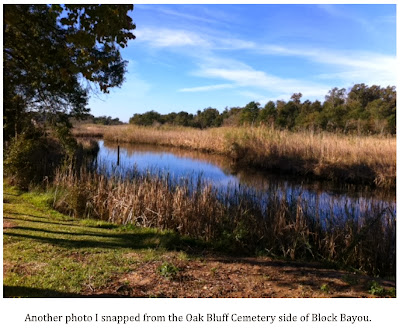 Being able to visit a sighting location in person is always helpful. It brought several questions to mind regarding this alleged sighting. First, Mr. Arceneaux mentions that the creatures had been throwing rocks into the water. This concerns me a bit as the bayou is very close to where the witness must have been standing. He would’ve clearly heard the rocks hitting the water from this spot. Why did it take a “blood-curdling scream” to get the witnesses to look up? The second problem I have with the rock statement is that there just aren’t many rocks around. This area is a marshy bog or “gumbo” as we used to call it. There just aren’t any rocks out there. Anyone who has spent any time in a swamp can tell you that rocks are hard to come by.

The next detail that causes me some concern is the statement, ““All of a sudden they started walking then running through the woods.” Mr. Arceneaux doesn’t say that ran back toward the woods; rather, he said they “started walking then running THROUGH the woods.” This is an important distinction. The tree line is only about 100 yards from where I stood and took my photos. I don’t think it is unreasonable that Mr. Arceneaux could have seen the figures from that far away; but they must have been right at the wood line when he saw them as there are no trees between Block Bayou and the forested area. Mr. Arceneaux even claims that one of the figures was “standing next to a tree, arms around the trunk,” when he first spied it. This is all well and good except for two things. Supposedly, the two apes were throwing rocks into the water when he heard one of them scream causing him to look up. There is no water near the tree line that I could see. So, were the apes in or near the woods or 100 yards away from the trees out near the water’s edge and VERY close to the witness? There seem to be some conflicting details here. The second problem with the figures being in or near the woods is Mr. Arceneaux’s claim that he could see the face of the creatures as “plain as day” as they walked, then ran, through the trees. I have a very hard time with this. Again, the woods are approximately 100 yards from the bayou’s edge. IF the apes were near the tree line there is no way anyone could clearly make out facial details. 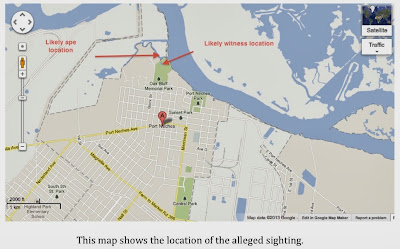 The final factor that casts a shadow of doubt over this incident is the location itself. The area in question is surrounded on three sides by heavily populated areas. The Neches River creates a substantial barrier on the fourth side. I suppose it is possible that a pair of apes could make their way to this area but they would, in my opinion, have to swim to get there. I don’t see how they could traverse that side of the river without running into substantial obstacles and a large number of people. Why would a pair of intelligent and amazingly elusive creatures choose to pen themselves into an area like this? It seems an unlikely scenario.

To be fair, I have not interviewed Mr. Arceneaux. Maybe some details were misrepresented by the reporter who wrote the story. Lord knows it has happened before. It is possible he could satisfactorily address the questions I have if given the opportunity. His photo seems to show something though it is far too fuzzy and indistinct to draw any hard conclusions. I must say, though, that I have some serious misgivings about this alleged sighting. There just seem to be a lot of things that don’t add up.

In the end, I guess we’ll never really know what, if anything unusual, was roaming the banks of the Neches River and Block Bayou that day. If I had to wager though, I would guess it wasn’t a pair of wood apes.
Posted by Mike at 6:52 PM