There are a couple of photos making the rounds on Facebook and via email that feature what appear to be black lions. The photos are quite striking and the animals in them are beautiful. Unfortunately, they are not real. The photos have been digitally manipulated to make normal tawny-colored lions appear black. Dr. Karl Shuker does a great job of debunking these photos here. 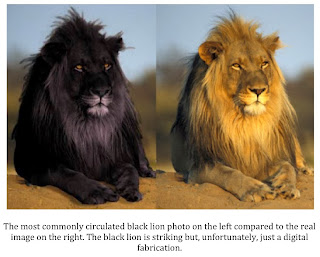 Stories of melanistic lions are not new. They go back for centuries. In fact, the great explorer Marco Polo claims to have observed a black lion during his travels (most people today feel Polo likely observed a melanistic leopard). The problem is that, much like the North American cougar, no melanistic lion has ever been documented by science. Many cats have the melanism gene but lions are not thought to be one of these species. There are several possible explanations to the black lion sightings. The video below does a very good job of outlining them. It is worth the time to view this short video to the end.

If you’ve been reading this blog for very long at all, you know that I strongly believe there is something to the black panther reports that are so often reported here in the southern United States. That being the case, you may think it strange that I’m spending time debunking photos of another possible cryptid big cat. Let me be clear on this; I’m not dismissing the possibility that melanistic lions could exist. I’m dismissing the two most commonly circulated photos being presented as evidence of their existence. There is a difference.

I do truly believe there is a real animal out there responsible for the black panther sightings here at home. I’m less convinced of the existence of black lions but remain open to the possibility, hopeful even. Anecdotal though the evidence may be, there are many more, what I consider to be, credible sightings of large melanistic cats here in North America than there are of black lions in Africa. I will freely admit to not being an expert in regard to African cryptids but do follow these types of things pretty closely and feel there is not much evidence to back up the possibility of melanistic lions.

Like it says at the end of the video, “Nature has thrown us bigger curve balls than this.” Certainly that is true; however, these photos making the rounds don’t prove it. Maybe one day a melanistic lion will be documented.

That day just hasn’t come yet.