Note: I actually had this post ready over a week ago but other topics kept bumping it back. I mention this now only to explain some discrepancies in the time/dates discussed in the post.

I mentioned here a few days ago that a mountain lion had been spotted just north of Temple, TX. The spot where the lion was seen is very close to the area where a pair of horses was killed two summers ago and where a calf was taken by some sort of predator just last week. I’ve had cameras up in the area periodically for almost two years. I’ve captured all manner of wildlife on those cameras but have yet to get a photo of the big cat I suspect is responsible for these incidents.

Once I got wind of the latest sighting, I wanted to waste as little time as possible in getting my cameras back up in the field. I was frustrated in my efforts by some poor and rainy weather but finally was able to get out and post the cameras two days ago.

The cameras are on the same property as before; however, I have changed tactics just a bit. In the past, I’ve posted cameras overlooking a dry creek bed. This proved to be effective as I got a lot of photos of various types of wildlife. Coyotes, raccoons, bobcats, herons, opossums, and river otters all got their pictures taken. The problem was that occasional flooding took out several cameras. These things aren’t cheap and, despite the fact that I was getting a lot of good shots, I got tired of that pretty quick. In addition, while I did get pictures of bobcats walking the creek bed, I got a lot more photos of them on a game trail that parallels the creek. All that being the case, it was an easy decision to post the cameras on the game trail above the creek and, hopefully, out of harms way. I may miss some shots of other animals but I think I have a better chance of getting the cougar photo, assuming it is still anywhere around the area, on the game trail. 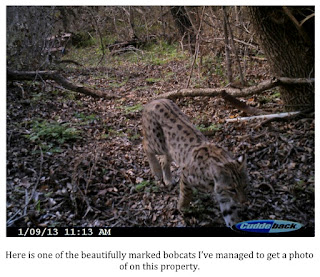 I also changed tactics and placed one camera in an area away from the creek. This camera is in a wooded area near a power line right of way and the remains of an old barn that, I suspect, is used as shelter by various animals from time to time. I found a pretty nice game trail cutting through the area and have the camera looking right down it. Something is walking the area on a regular basis and it will be interesting to see just what it might be. We’ll just have to wait 4-5 weeks to find out.

I did something different while out setting up my cameras this time around. I decided to attempt to film the outing so that I could share the experience a bit more effectively. I have actually had some readers email in and suggest I start a YouTube channel on which I could share some of my experiences. I have always tried to post a lot of photos on the site to accomplish just this but realize there is no substitute for video. So, partially inspired by a “Survivorman” marathon, I decided to give the video a try. Filming the actual outing turned out to not be that big a deal. I did not lug around a tripod so, other than my hands, I’m visible only in the opening and closing sequences of the video (that may not be a bad thing, haha). What turned out to be a much bigger pain was editing the video. I work exclusively on a MacBook Pro (I’m not being paid to say that, unfortunately) and the only editing software I have came preloaded on it (iMovie). That would be fine except my JVC hard drive camcorder outputs only .MOD files which, you guessed it, is incompatible with iMovie. So, I had to search for and download some video editing software. It took a little while to figure out but once I got all the video files converted to something compatible with iMovie it went ok. The resulting effort is a bit crude but it does, I think, give you a better idea of what the area I’m working in is really like.

I had to cut some material from the final edit as the video would have exceeded the maximum 15 minutes YouTube allows (I found out only AFTER the final edit that you can circumvent this limitation) so there are a few spots where the transitions aren’t too smooth. I have not learned to use all the bells and whistles of the iMovie software so don’t expect high-end production values. That isn’t my goal anyway so it is ok. I just wanted to provide another way to share my “adventures” with readers. Below is the first installment of “TCH TV” (I did preview some software for free and that is why the annoying watermark remains in the upper left corner of the video for its entirity).

I would appreciate some feedback on the video. It isn’t a huge pain but does take some effort and time to do. Let me know if you feel video documentation of my outings are worth the trouble or if photographs are sufficient to convey the experience.

I’ll look forward to hearing from some of you.