The following article and photo appeared in today's edition of the Port Arthur News.

PORT NECHES — Chill bumps rise on David Arceneaux’s arms as he looked across Block Bayou at a line of trees about 100 yards away.

“I’m not crazy. I don’t do drugs and I’m not a drinker,” Arceneaux said before telling his tale of seeing not one but two Bigfoot-like creatures huddled together one December morning.

The Nederland native visits Oak Bluff Cemetery about once a month to clean the graves of a friend and a cousin, something he has done for years without incident. But on an overcast, windless day Arceneaux got the fright of his life.

What he saw next amazed him. Two Bigfoot-like creatures who had been throwing rocks in the water looked across at him and the unknown female. One was standing next to a tree, arms around the trunk and the other was squatted down. As the second creature rose from the crouching position Arceneaux estimated the creature was about eight-foot tall. So he snapped a photo with his phone, he said. 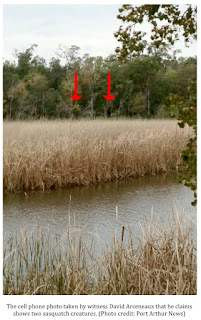 Arceneaux said he spoke to a game warden, describing the situation, and was told there had been other sightings along the Neches River. Calls placed to a local game warden was not returned by Tuesday afternoon.

There are a number of organizations throughout the state that researches and documents Bigfoot sightings. Groups such as Texas Bigfoot Research Conservancy and Gulf Coast Bigfoot Research Organization. These groups strive to find evidence to scientifically prove the existence of the creature.

Jerry Hestand of Texas Bigfoot Research Conservancy said there have been reports of sightings in the Big Thicket area and he has had personal experiences at the Lance Rosier Unit in the Thicket.

Hestand said one of the creatures entered his camp and growled at one of the dogs. The dog, he said, growled back but by the time the men jumped up from their tents the creature was gone. Hestand said the group was part of an episode of a Travel Channel show called Weird Travels in which Bigfoot vocalizations were played.

“There is a sound on the Internet called the Ohio howl,” Hestand said. “That’s exactly what we heard clearly and distinctly.” 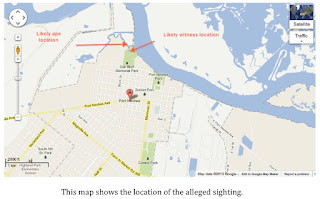 I find this account especially interesting as I grew up in this very area of Jefferson County. The cemetery the witness was visiting is well known regionally as it is the final resting place of country crooner Tex Ritter. The area used to be a popular "parking" spot for teenagers back in the early 80's. Just back to the east is the allegedly haunted Sara Jane Road (E. Port Neches Ave./Atlantic Rd.) where all manner of odd things seem to occur. The area is not the first place I would think of when it comes to sasquatch sightings. Still, there have been a few reports along the Neches in this area (though they've occurred on the north bank) and it is not far from Orange and Newton Counties which do have a rich history of such sightings. The photo is interesting but, like almost all the others allegedly showing these creatures, too fuzzy and indistinct to be proof of anything.

I still have family in this area and plan on making a trip out to the sight next time I visit. If nothing else, it will be a nice outing and trip down memory lane. I'll take some pictures and sniff around a bit. You just never know what I might find.
Posted by Mike at 5:59 PM