The Beast of Bear Creek

The term conjures images of howling bloodthirsty monsters prowling the moors in search of human prey. Thoughts of silver bullets, the full moon, and the painful and horrific transformation of a man into an inhuman beast may come to mind. Many people consider the werewolf to be a European myth that has become part of Western popular culture only via television, comics, and movies. They would be wrong.

Texas and Louisiana actually have quite a rich tradition of werewolf, and other shape-shifting creature, legends. While I believe many have an element of truth to them, it is often impossible to separate what is fact from what is myth and hyperbole. One of the Texas legends that has fascinated me is the tale of the beast of Bear Creek.

Older residents of the Texas Hill Country may be familiar with the story of the beast of Bear Creek. It was widely believed among the early settlers of Kimble County that an old Native American shaman, among the last survivors of his tribe, had the ability to change from his normal human form into that of a large wolf. The old medicine man, it is said, would seek revenge on the white men who had decimated his tribe by transforming into his wolf persona and roaming the countryside at night killing everything from livestock to unfortunate settlers caught outside after dark. Tales of shape-shifters and skin-walkers permeate the folklore of many Native American tribes but what makes this particular example unusual is that many of the white settlers of Kimble County, in particular those near the old town of Cleo, believed the story to be true. So much so, that the image of the beast of Bear Creek, as the monster became known, was immortalized in solid rock. 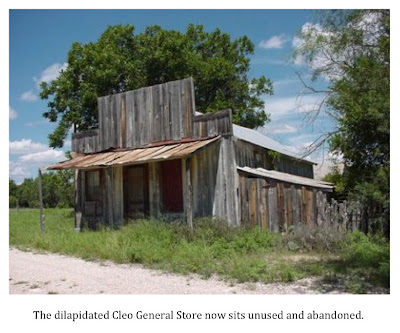 N.Q. Patterson, who lived in Kimble County during the time when the beast of Bear Creek allegedly roamed the countryside, was a man of many talents. At one time or another he served as the county treasurer, county judge, and tombstone carver. It was his skill as a stone cutter and sculptor for which he is remembered to this day. Patterson, apparently, was unable to satisfy his artistic bent by carving tombstones so he took to carving figures into the limestone cliffs and bluffs near and around Bear Creek. Of the many images created by Patterson, one in particular, has become quite well known. Dubbed the “Cleo face,” due to its proximity to the small town of the same name, the large carving depicted a strange and fierce creature. The figure seemed part human and part animal. The nose was broad and protruded more than that of a person. The lips of the creature were curled back in a vicious snarl that revealed terrible fangs with which it could, no doubt, do terrible harm. The carving was quite large and became very well known in the region. Many came to the conclusion that this was a representation of the old shaman in his wolf guise; the beast of Bear Creek. Had Patterson seen the monster himself? Was he merely basing his carving on the legends he had heard or was the “Cleo face” merely a manifestation of Patterson’s fertile imagination? If N.Q. Patterson ever revealed the answer to these questions I was unable to find documentation of it.

The Kimble County area continues to be a source of some strange creature reports. These days they typically do not involve werewolves and/or shape-shifters; rather, modern day witnesses are reporting out of place mountain lions, black panthers, and the odd-looking hairless bluish-gray canines often dubbed chupacabras by the media. Lost livestock is blamed on one of these culprits more often than not. Odd screams and howls, still heard by the rural residents of the area more often than outsiders would guess, are simply dismissed as coyotes. To my knowledge, no one has reported a sighting of the beast of Bear Creek for a very long time. This is not surprising considering that the town of Cleo is now all but a ghost town. All that remains of the settlement is the rickety structure that was once the Cleo General Store and, directly across highway 2291, a building that, according to the sign over the door, once served as the Bear Creek Community Center. The people are all gone now. Whatever the beast of Bear Creek was, if it was real at all, will never be known. 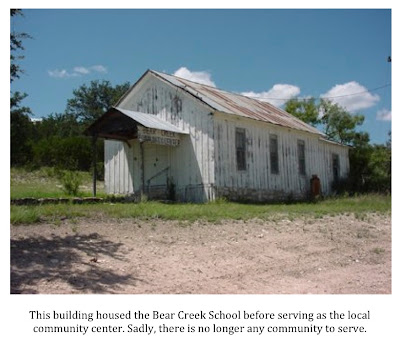 Patterson’s creation has been a topic of conversation and debate for well over a century now. The “Cleo face” is said to survive, though in a badly eroded state due to years of exposure to the elements, to this very day but sits on private property to which the public has no legal access. Exactly what the carving depicts will remain a mystery. Somehow, I suspect that is exactly the way N.Q. Patterson would have liked it.

*Addendum: I searched long and hard for a photo of the “Cleo face” but came up empty. If anyone knows of or possesses a photo of this carving I would really enjoy seeing it.