A Tropical Mockingbird (Mimus gilvus) has been spotted in Texas. To those of you who are not avid birders this may not sound like that big of a deal. Trust me, it is. This is not only the first time that this particular species has been seen in Texas but, to the best of my knowledge, the first time it has been seen anywhere in the United States.

Mockingbirds are very common in Texas; however, it is the Northern Mockingbird (Mimus polyglottos) with which we are all so familiar. The Tropical Mockingbird that has, seemingly, taken up residence in the Texas Ornithological Society’s Sabine Woods sanctuary just outside of Sabine Pass is native to southern Mexico, Central and South America, and some Caribbean Islands. As stated above, it has never been seen this far north. 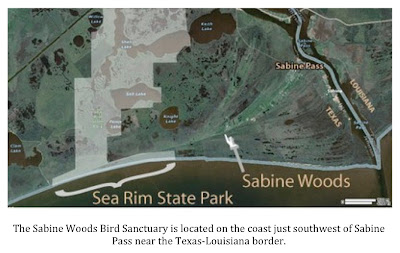 As you might imagine, birders have flocked (no pun intended- well, maybe a little bit) to the Texas coast to see what may be a once in a lifetime opportunity to see this bird here in the U.S. The bird is a female and seems to be nesting. Birders I’ve talked to say it is possible, some used the word ‘likely,’ that the Tropical Mockingbird and Northern Mockingbird would be able to mate though none could say whether such a union would produce viable offspring.

The Tropical Mockingbird does not at first glance appear strikingly different in appearance from our Northern Mockingbirds. A casual observer would likely be unaware he was seeing anything other than a species common to the state. The two species are similar in size with adults measuring up to about 25 cm in length and averaging 50-55g in weight. A closer look does reveal some clear differences between the two birds, however. The Tropical Mockingbird has a longer tail than its northern cousin and lacks white markings on its wings. When seen side-by-side it is pretty easy to see the difference between the two birds. 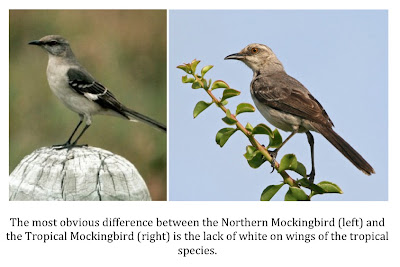 How this tropical bird found its way to the Texas coast is a mystery. This is important as it could make the difference between the bird being officially listed as a species in Texas or not. It seems the Tropical Mockingbird is kept as a pet in locales where it is common. Some officials have already put forth the theory that this bird may have been carried into Texas by an immigrant or a tourist returning from a vacation in Central or South America. The birding enthusiasts I’ve spoken to feel this is a highly unlikely scenario and feel strongly the bird made it to Texas on its own. They have expressed frustration that the bird might not be listed due to a theory in which they put little stock. I had to chuckle a bit as the protestations of these birders reminded me of those of people I’ve spoken to who have seen large black cats in Texas who were told that they must have seen an escaped pet.

So, assuming the immigrant/tourist theory is wrong, how did this Tropical Mockingbird get to Texas? Nobody can say for sure but I’ve been assured that things like this sometimes happen. From time to time, it seems, individual birds get their internal compass reversed and fly north instead of south. Another possible explanation is that the bird could have been caught up in a strong wind (jet stream, storm, etc.) that blew it much farther north than it ever intended to travel. Whatever the case, there is zero doubt that it is here. Being a mockingbird, it is not shy around people and has cooperated with those that have wished to photograph it (I have several photos of the actual bird from the Sabine Woods but have not yet received permission from the photographer to use them here).

The Tropical Mockingbird surely qualifies as an out of place animal per my criteria and I feel warrants a mention here on this site. It will be interesting to see if our tropical visitor’s stay is temporary or if it decides to take up permanent residence.
Posted by Mike at 9:33 AM