Richland Hills, Texas has been placed on “coyote alert” according to an article on the website of Waco television station KWTX. Police are warning residents to be vigilant and take extra precautions to safeguard their pets from marauding coyotes that have been attempting to grab easy meals.

According to Richland Hills police, a resident claims to have seen a coyote (Canis latrans) stalking a horse three days ago. The witness said he threw a ball at the coyote and scared it off. Later that day, another resident in the same vicinity reported that a coyote had come into her yard and grabbed her dog. The coyote started to run off with the terrified pet but dropped it when the resident screamed at it. The coyote then stared at the resident for a few seconds before trotting away. According to this same resident, a coyote also grabbed her neighbor’s dog, which , fortunately, also managed to escape. Richland Hills Animal Control has now gotten involved and placed a live trap out in an effort to capture the rogue coyote(s). 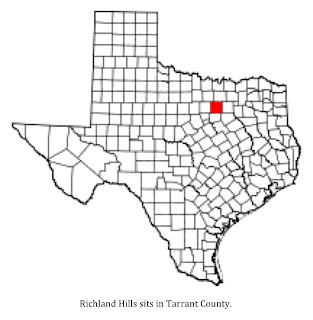 The story on the site is pretty short and does not say if these various incidents took place during the day or at night. The impression I get is that the incidents took place during daylight hours. If so, that would be atypical behavior for a coyote. It tends to make me think there is only one animal responsible. I would guess, since the behavior is so unusual, this coyote is sick, hurt, or very old. A coyote would have to be pretty desperate to attempt to take down a horse alone. Daylight attempts to take pets in populated areas is also very bold and hints at possible desperation. 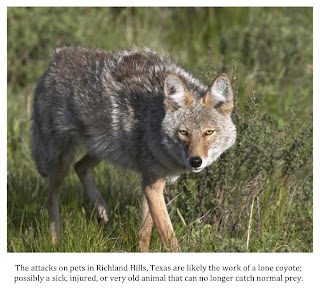 The drought here in Texas has eased a bit so that is likely not a factor in these incidents. The hottest, driest months of the year are quickly approaching, however, making the potential for similar incidents occurring across the state greater. Coyotes are opportunistic and will take pets if given the chance. All pet owners need to be vigilant if they live in areas also inhabited by coyotes. I would add that parents of small children should take the same precautions.