An Ocelot or a Bobcat?

A couple of months ago a reader contacted me regarding a picture of a spectacularly marked cat that had been photographed by a game camera near Valley Mills, Texas. The photo had been captured by a friend of this reader who thought the image might be that of an ocelot. I guess I don’t have to tell anyone reading this post that I live for this sort of thing and asked if he might email me the picture.

When I first opened up the file and viewed the photo I, just for a second, thought it might indeed show an ocelot. Upon closer inspection, however, it was obvious the photo showed a bobcat. While the head of the cat is not visible in the photo, the short tail gives away the identity of the cat. 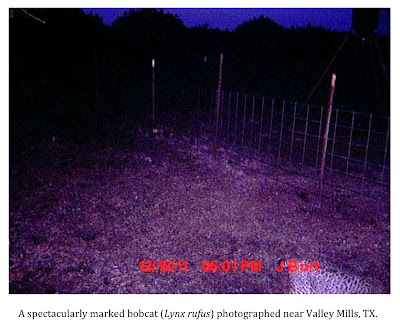 Don’t get the idea that I was disappointed. While a photo of an ocelot would have been spectacular, I get a kick out of all pictures of big cats. This bobcat is absolutely gorgeous. It is downright “leopard-like” in appearance and anyone catching just a glimpse of it could certainly be excused for thinking they might have seen something more exotic. 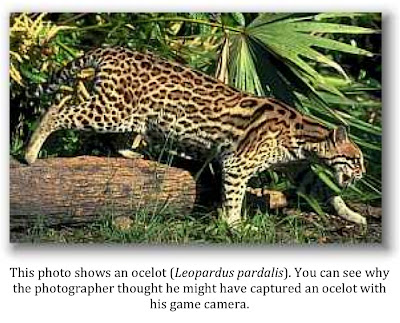 A great many people assume bobcats are all a bluish-gray color. This is just not the case, at least not here in Central Texas. If you have followed this blog of late you know that I’ve captured some photos of similarly marked cats. Our population in this part of the state is anything but dull in appearance. Bobcats may be the most common wild cat left in the Lone Star State but they are truly something to see.

I’d encourage all of you out there to invest in a game camera. They come in all price ranges and have actually become very affordable. Put one out overlooking your pond, pasture, or even a bird feeder. You’ll have a lot of fun looking over all the photos you capture.

You just never know what you might see.
Posted by Mike at 5:04 PM