National Park Service personnel are on the hunt for a mountain lion (Puma concolor) that attacked and injured a 6-year old boy earlier this week. The boy was walking with three other people when he was singled out for the attack.

Big Bend National Park official David Elkowitz said the boy was treated at a hospital in Alpine for puncture wounds and scratches. The boy’s injuries were not serious and he was released from the hospital shortly after seeking treatment.

Elkowitz said the boy was walking with three other people near the park lodge when the lion pounced. The big cat may very well be sick or injured as witnesses described it as, “a young lion in very poor condition.” 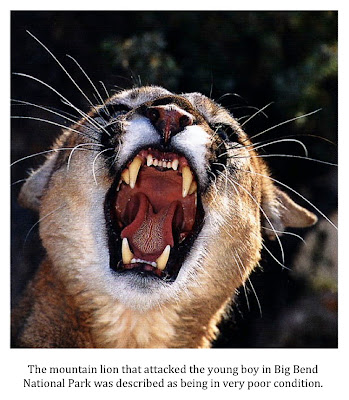 Officials evacuated campsites early Monday and closed other trails and areas of the park including the Chisos Basin, Window Trail, the Pinnacles, Boulder Meadow, and Juniper Flats so that the hunt for this cougar could get underway.

If the animal that attacked this young boy is located it will be killed. Officials really have no choice in that matter. As of now, however, the lion remains on the loose.

This attack should not discourage people from enjoying the outdoors; however, it should serve as a reminder to remain vigilant at all times. Wild animals are just that…wild. They can be dangerous and when faced with extreme conditions like the drought Texas is currently suffering or if sick or injured they will behave in atypical ways.

I would not say that outdoors enthusiasts should beware; rather I would caution them to be aware. Nothing can prevent every animal attack, and this situation may very well fall into that category, but if you are going to be spending time in the outdoors, especially in an area with which you are unfamiliar, do a little homework. Find out what wildlife might be present in the area and then combine awareness with a bit of common sense.