Rare Sighting of a Long-Eared Owl on Texas Coast

If you’ve read this blog for any length of time at all you know that I am interested in all manner of wildlife. While I have a unique interest in animals that would be thought of as cryptids, I am not one of those people obsessed only with animals that might exist. Certainly, mysterious creatures like bigfoot, black panthers, and the like intrigue me. If they didn’t I would have come up with a different name for the site. While I have devoted many posts to cryptozoological topics, I have also written many posts on known animals like alligators, bears, cougars, sharks, wolves, coyotes, and, well, you get the idea. Sometimes, a known animal showing up somewhere it generally isn’t seen or just flat out does not belong interests me as much as anything else. This post sort of falls under that umbrella.

A friend of mine emailed me these photos of a Long-eared owl (Asia otus). This species of owl would not be considered uncommon in anyone’s book. What’s unusual about these photos is where they were taken. These images were captured in the Sabine Woods on the Texas Coast just outside of Sabine Pass. The Sabine Woods (formerly known as Grim’s Woods) is a bird sanctuary owned by the Texas Ornithological Society. It is a significant tract of woods consisting mostly of live oaks and features a natural slough/wetlands area. The area is only about a quarter of a mile from the Gulf of Mexico and serves as one of the most important migratory stops in the region for neo-tropical birds. All that being said, spotting a pair of Long-eared owls there qualifies as very unusual. 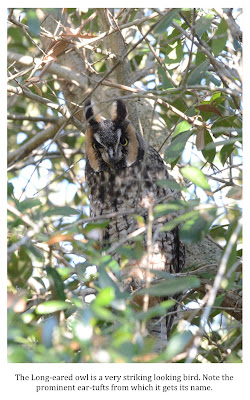 The Long-eared owl is very striking in appearance as you can see. It is considered a medium-sized owl averaging 12-17 inches in length. The most noticeable physical features of these owls are the erect blackish ear-tufts. It is theorized that the ear-tufts are designed to make the owl appear larger and more intimidating than it really is. 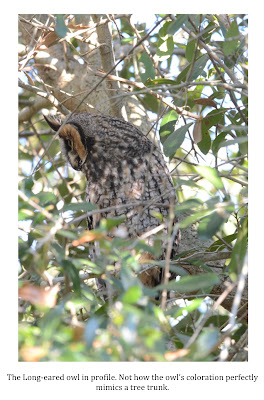 The Long-eared owl usually breeds between February and July. This owl is considered to be partially migratory as it does fly south from the northern parts of its temperate range to winter. However, as you can see from the map below, the Texas coast is considerably farther south than where you would expect to find these owls. In addition, it usually prefers coniferous forests in which to nest. The Sabine Woods, being made up mostly of hardwoods, doesn’t fit that particular bill. This owl will gladly use the abandoned stick-style nests of other birds like crows and hawks as well as man-made nesting baskets. Often these owls will roost communally during winter months though only two of these birds have been spotted in the Sabine Woods to this point. 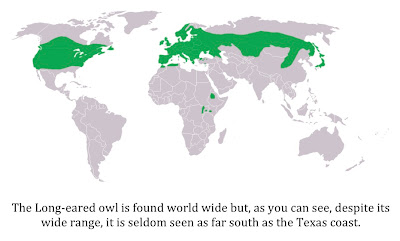 I’ve always thought owls were really awesome birds. Their nocturnal habits always made them seem somehow more mysterious than other birds of prey. Many nights spent in the woods of Texas, listening to the calls of Barred owls (Strix varia) have done nothing to change my opinion. These Long-eared owls may not be cryptids but I think they do qualify as an out of place animal in this instance. Even if that is a stretch, I just enjoyed the photos too much not to post them.

Email ThisBlogThis!Share to TwitterShare to FacebookShare to Pinterest
Labels: Out Of Place Animals