Most people with even a passing interest in nature have heard of the plight of the Ivory-billed Woodpecker. The sad tale of how this magnificent bird became extinct, due mainly to loss of suitable habitat, is well known. What is not as well known is the story of an equally magnificent, and even bigger, woodpecker that once thrived in the Sierra Madre Occidental – a rugged mountain range stretching 900 miles, or so, south from the U.S.-Mexico border – and in the mountains of central Mexico.

The Imperial Woodpecker (Campephilus imperialis) was truly a magnificent bird. It was (is?) the biggest woodpecker in the world. Males could grow up to 24 inches long. They were strikingly colored. Males had a red-sided crest but were mostly black in color with the exception of inner primary feathers, secondary feathers, and a scapular stripe, which were white. Females were similarly colored but the crest was solid black and recurved at the top. It had obvious similarities to the more famous Ivory-billed Woodpecker and was actually sometimes called the “Mexican Ivory-bill.” 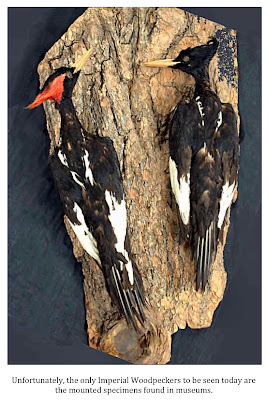 The Imperial Woodpecker was common up until the mid 1950’s when habitat loss began to take it’s toll. The last confirmed sighting of this species occurred in 1956. Amateur ornithologist William Rhein, now deceased, captured 85-seconds of film of an Imperial Woodpecker foraging for insects on old growth pine trees and flying from one spot to another. The footage, a bit jumpy due to the fact that Rhein was riding on a mule as he shot it, is considered to be 85 seconds of pure gold by the birding world. The film has now been made available to the public for the first time. You can view it here.

The film had been in the hands of the Rhein family for years before it was tracked down by Martjan Lammertink of Cornell University. Lammertink became aware of the existence of the footage only after he came across an old letter that mentioned the film in the University’s archives. He tracked down William Rhein 10 years ago at his home in Pennsylvania and was able to view the film. Rhein’s nephew donated the film to Cornell upon his Uncle’s death in 2006.

Living Bird magazine editor Tim Gallagher said, “ It’s amazing that the bird does so many different things in 85 seconds. It’s a gold mine of information about this bird.”

Lammertink, who authored a paper about the footage published in the November issue of The Auk said, “It is stunning to look back through time and see the magnificent Imperial Woodpecker moving through its old growth forest environment. It is heartbreaking to know that both the bird and the forest are gone."

Gallagher and Lammertink traveled to the spot where the film was shot just a year or so ago but, not surprisingly, found no trace of the bird. Nearly all of the old growth forest had been cleared and the area is now the territory of drug cartels.

“It’s a very dangerous place,” Gallagher said. “There were a lot of people with AK-47s.”

As I watched the footage of the Imperial Woodpecker I found myself overtaken with a powerful melancholy. To know that this most magnificent of all woodpeckers is likely gone forever is sickening. To view the Rhein footage is both an incredible gift, as we can see exactly how the bird moved, flew, and went about it’s daily business, and a terrible reminder of just how badly we humans have failed at being good stewards of the natural world. I hope that we learn our lesson soon.

There are no second chances.

http://www.msnbc.msn.com/id/45064203/ns/technology_and_science-science/t/long-gone-woodpecker-lives-again-newfound-film/
Posted by Mike at 5:14 PM