I thought I would give everyone an update on the camera project I’ve got going in Upshur County, Texas.

As you may recall, my friend Ken Stewart alerted me to a very credible black bear (Ursus americanus) sighting that took place in Upshur County back in November of 2010. You can read the original post here for the details. Ken interviewed the witness, an old family friend, and obtained permission for me to place a couple of game cameras on the property. So, this past May I made the trip to NE Texas, met Ken, and went to visit with the witness and place the cameras. 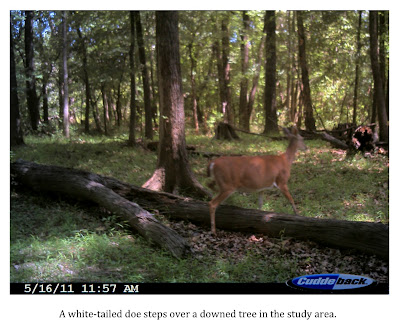 Not only did the witness share her experience of viewing three black bears as they helped themselves to an apple tree near her home but added the story of seeing a large black cat some months before as well. We also happened to run into a gentleman that leases some pasture-land belonging to the witness on which he runs cattle. He told us an interesting story of a sighting he had of a large black animal, which he says was not a hog or a bear. Read his account on this post. 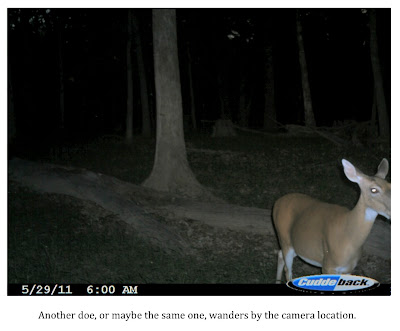 The area looked promising as the property backed up to a natural slough area formed by a small tributary of Cypress Creek. Hardwood trees are everywhere and there are wild black berries and muscadine grape vines growing all over the property. Ken and I picked a couple of good looking spots, applied some bear attractant, and set out two cameras.

As of last weekend, the cameras have been out for a month. Ken was generous enough to go check the cameras himself so I wouldn’t have to make the long drive to NE Texas. The results were disappointing on two fronts. First, we got only a handful of photos. Second, it seems one of the cameras was stolen as Ken could not locate it. I guess I shouldn’t be surprised by the thievery but find myself shaking my head about it just the same. Not only was the thief brazenly trespassing but they just helped themselves to the camera without a second thought. It is too bad the second camera didn’t get a shot of this person as I’d have had that photo on the desk of the Upshur County sheriff ASAP. 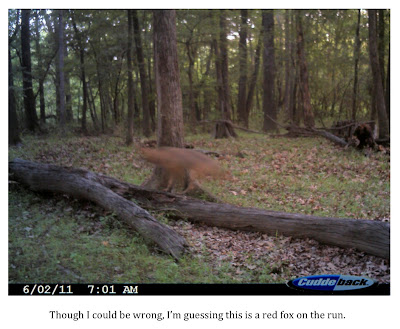 The news wasn’t all bad as we did get a few pictures showing some wildlife including one that, at first glance, is really creepy. The photo in question shows a pretty scraggly looking coyote (Canis latrans) moving from the camera’s right to left. What is interesting is there are two sets of glowing eyes behind the coyote. The animals are pretty far behind the coyote, judging by the position of a stump in the frame, one of the animals appears to be very large. As I mentioned above, cattle are present on the property. Upon reflection, Ken and I both think the eyes probably belong to a cow and her calf that wandered down to the bottoms from the higher pasture. It is an eerie looking and fun image, however. Another photo is somewhat intriguing as it shows something getting up close and personal with the camera. All you can see is a large dark object blocking about ¾ of the frame. I can’t even be sure it is fur or hair visible on the object. It could be a falling stick, one of the bears we were seeking, or something else altogether. Again, keep in mind that the camera was set up about four and a half feet off the ground. Other photos showed white-tailed deer (Odocoileus virginianus) and what looks like a running red fox (Vulpes vulpes). 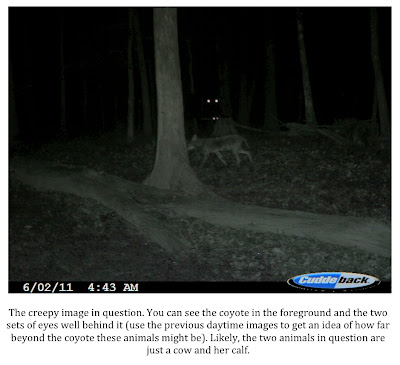 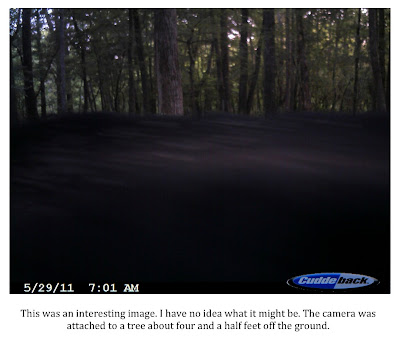 I had Ken pull the one remaining camera. I have some other plans for it in the near future. Ken is going to deploy a camera of his own near the home of the witness pointed at the apple tree. Once fall arrives, and the apples ripen, our bruin friends might be back.