I’m pleased to announce that I’ve started a new camera-trapping project right here in my home of Central Texas.

Back in March, Waco television station KXXV aired a video report about a “mystery animal” that was roaming rural SW Bell County and “ravaging livestock.” The video of the story has been removed from the KXXV website but, as of this writing, the printed version of the report is still available. Check it out here. 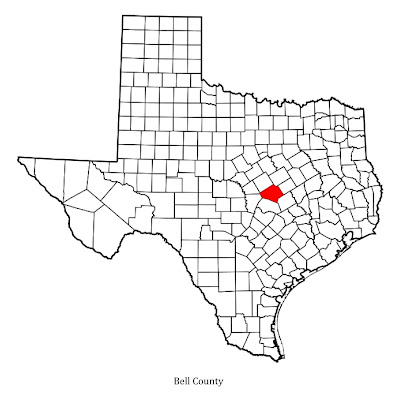 I kept a close eye on the story as it was taking place practically in my backyard. An article printed in the March 3rd issue of the Killeen Daily Herald suggested there really wasn’t anything mysterious about the predator(s) at all and implied nothing but a pack of coyotes was responsible for the lost livestock. While I agreed that coyotes were likely responsible for most, if not all, of the killings, I did find it very interesting how people who had claimed to have seen the predator could have such differing opinions on what the animal might be.

“No, I don’t think it is a coyote,” said farmer Dale Fisher in March. “It’s either a wolf or a mountain lion.”

In April, a man identified by the Killeen Daily Herald as rancher Jim Bob Fisher said, “I don’t want anyone to think this is different from anyone else’s problem. Someone has claimed it is a wolf or something but I don’t know why.” He added, “It’s a very large coyote we’ve seen or a coyote-cross. There have been coyotes crossed with dogs in this part of the world since forever.”

It is unclear if Dale Fisher and Jim Bob Fisher are related or, possibly, even the same person. What I do know is that Jim Bob Fisher is the son of Bell County Commissioner John Fisher. As such, it isn’t too surprising that his opinion fell in line with that of his father who said, “I saw a coyote. I didn’t see a chupacabras or whatever it’s called. They (KXXV) pumped it up like there’s this mysterious animal.”

I did two separate posts on this story. One in March and one in April and offered the services of my game cameras to any landowners that would like to try and find out, for sure, what is roaming their property at night. I didn’t hear anything from anyone until late last week when I received the following email:

“I found your blog after losing my 8th cat in 2 years to coyotes (well, two of the cats went that way, at least..we saw a coyote last night in our yard.) When this started, I'd had the same 100% outdoor, mouser/snake-repelling cat for over 5 years. I live in the same general area as the Fishers but never heard the news report about the animals. Also within the last year or so, we've seen some large canines that we don't believe to be coyotes & are definitely not dogs. I hesitate to call wolf (pardon the pun, ha), but 3 of them were black, the other was so large that I would be shocked if it were, in fact, a coyote. 3 of these were seen right at dusk, the 1st black one I saw was road-kill, had paws the size of saucers and very thick ears. Like the Fishers, our family goes back generations in southwestern Bell county, we're accustomed to seeing coyote, all kinds of stray dogs & the occasional mountain lion. But I'm pretty sure there's something else out there.” 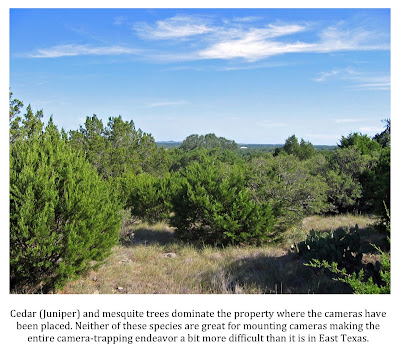 I replied with an offer to come out and place some cameras on the property to see if we couldn’t get a photo of these canids. My offer was accepted and I was privileged to visit with the family and tour the property last Saturday. As is often the case, I heard much more during my face-to-face visit with the family than was mentioned in the email. The family used to keep goats but was “run out of the goat business” due to the predation taking place. They just couldn’t keep their goats from being taken. Several members of the family have seen large long-tailed cats on the property as well. At least two different cats have been seen; one that was described as “yellow” and one was, you guessed it, black. I told them that the official opinion of biologists is that large black panthers do not exist. The family got a chuckle out of that, kind of shrugged their collective shoulders, and said that they saw what they saw.

I was then taken on a tour of the property by one of the family members and we soon found a clear game trail running through a particularly secluded and wooded area. Cattle are being run on the property and there were cow trails all over the place. This trail, however, was on some steeper terrain than is found on most of the property and wound a narrow path through the mesquite, scrub oak, and cedars in this wooded area. Cows can, and will, get in some pretty surprising places but this trail is narrow and the trees hang low (I did a lot of ducking) which leads me to believe that it is being used by smaller animals that are lower to the ground than cows (at least most of the time). We found a spot where two game trails intersected and decided to put both cameras at this spot. I positioned one camera facing east down the main trail (this is usually not ideal as the rising sun can cause the camera to trigger but the area is wooded enough that I don’t think it will be a problem) and one facing north down the intersecting secondary trail.

I can attest that there is much wildlife on this large piece of property. During my short stay I saw at least half a dozen Eastern cottontail rabbits (Sylvilagus floridanus) along with a Gray fox (Urocyon cinereoargenteus). White-tailed deer (Odocoileus virginianus) sign was also seen though I didn’t actually see any myself. There does seem to be a prey base, on the property and in the surrounding area, that could adequately support a large predator at least temporarily. It will be interesting to see what turns up. 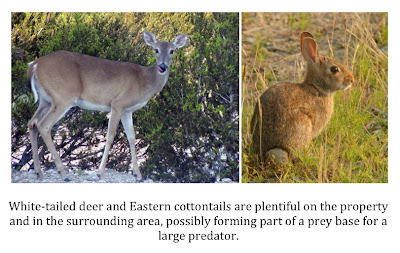 I’m particularly excited by this project. Unlike most of the camera projects I’ve undertaken, I will not have to drive 3-6 hours to check memory cards and change batteries. Assuming the landowners remain interested, this project could be a long-term census of the wildlife present in SW Bell County. More than that, however, it is nice to be able to help some of my Central Texas neighbors learn a bit more about what is inhabiting their land.

Hopefully, we’ll find something unusual.
Posted by Mike at 4:44 PM