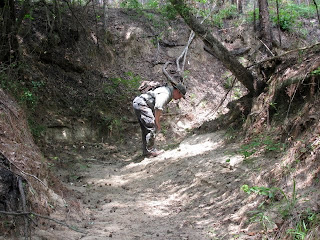 I just returned from a trip to the Piney Woods of SE Texas. The purpose of the trip was two-fold. First and foremost I was looking for potential camera locations for the TBRC's Operation Forest Vigil project. The secondary purpose, as always, was to look for any sign of our target species; the sasquatch. What a trip it turned out to be.

I, and one other TBRC member, arrived at our destination mid afternoon on Friday 5/7. We established base camp at reasonably remote spot in the forest and settled in for the afternoon. We relaxed a bit and had a bite to eat while we waited for the sun to set. The plan was to wait until 10:00 or 11:00pm and then drive the back roads of the area hoping to catch a sasquatch attempting a crossing. This is exactly what I was doing when I had my visual in May of 2005. We ran the roads, with video camera rolling, until about 3:00am. We did not have any luck as we only saw deer but did identify an area that we wanted to return to explore the next day. We returned to base camp at that time and called it a night.

We did have a large visitor of some kind at base camp that night. I managed to sleep through the visit but my partner heard something heavy approach us sometime prior to daybreak. He did say he was almost positive it was a hoofed animal. Whatever it was snorted and then quietly made its way back into the forest. My partner did sit up and try to catch a glimpse of the visitor but did not manage to do so. In all likelihood it was just a buck or maybe a hog (though they smell so bad their visits are usually easy to identify). Again, I slept through the whole thing and my friend didn't think enough of it to alert me. Things didn't get interesting until the next day. 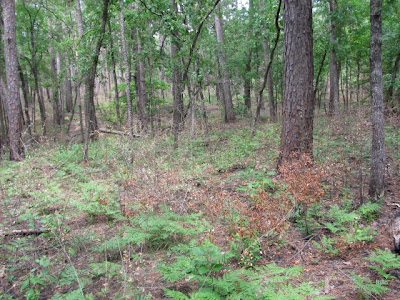 We slept in a bit the next morning and didn't get geared up and into the woods until shortly before noon. A cool front had come through during the night and the day was perfect for hiking with temps in the upper 70s to the low 80s. We returned to the area we had identified the night before, parked my truck, and hiked into the woods. We were pleased to find several very nice looking spots for future camera deployments in short order. While looking for additional camera spots, we located a creek that winded through the area. This was a great looking creek bed. The bottom of the creek was easily 10-12 feet below the forest floor. We quickly realized we were looking at a wildlife super highway. Animals could walk up and down the creek bed and be totally invisible to anything or anyone above. We dropped down into the creek and quickly began locating wildlife sign. We spotted raccoon, opossum, deer, hog, and coyote tracks almost immediately, which confirmed our feeling that this was a travel corridor. 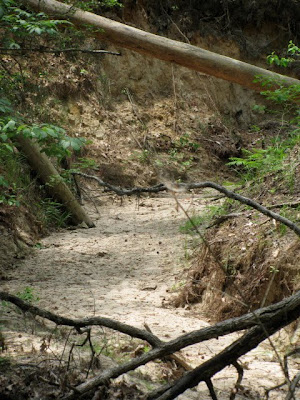 We followed the creek as it meandered through the woods and soon came to a small sandbar against the wall of the gulley where the creek took a sharp bend. In the packed sand we saw numerous impressions that resembled footprints. There were three different sizes. One very large set of impressions measured 14-15 inches in length. There were only two of these impressions but they were very wide and impressive. Also present were several impressions that measured 11-12 inches in length and several more impressions measuring only about 8 inches in length. The two smaller sets of impressions were not as wide as the big set but more numerous. We were sure we were looking at bipedal prints but the tracks were pretty degraded so we could not be absolutely sure as to what made them. We continued down the creek and continued to find impressions. It seemed every time the creek took a bend we would find impressions in the areas where the silt had been pushed up against the walls of the creek bed forming sand bars. We did not find any more of the largest individual's impressions but continued to see the tracks of the other two individuals. We continued another 200 yards or so when we located another group of tracks. The smaller impressions were everywhere. The little guy/gal seemed to be running around having a fine old time. There were only a couple of tracks of the larger individual. It was as if the adult had been patiently standing and watching the smaller individual frolic about. That is pure speculation, of course. What is not speculation is that one of the prints left by the larger individual is the clearest and most pristine track I have ever seen in the wild. 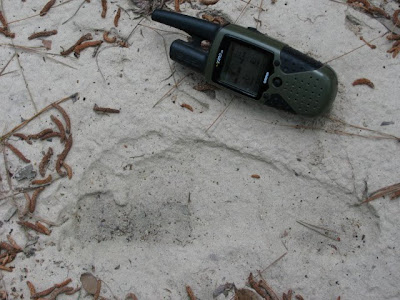 The print measured 11-12 inches long and clearly belonged to the same individual we had been tracking. The toes were crystal clear. The track showed little to no evidence of an arch. The track was only imprinted into the sand a half inch or so. However, the sand was packed extremely tight and our boots barely left any imprints at all. The big toe was huge and showed a slight divergence from the other four toes. We photographed the track from every possible angle and continued to track the pair until the creek split. The two of us split up with each of us following a separate branch for a hundred yards or so. I located one more track, belonging to the smaller of the two individuals, but that was it. We continued down the creek but found no other sign of the pair. They either exited the creek bed or backtracked and took the other branch. All together we were able to track these two individuals for more than a quarter of a mile. It was truly a remarkable track way. 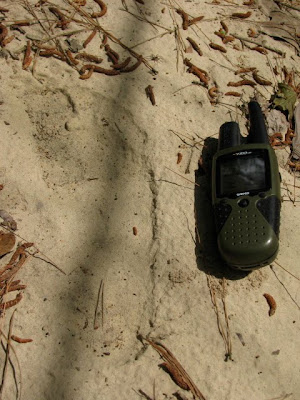 There can be no doubt that we were following the tracks of bipedal individuals. There can also be no doubt that they were either humans or sasquatches. There are simply no other possibilities in my mind. If you study the photos of the best print provided here, I think you will agree that these are the only two possibilities.

I can't divulge too much information on the area where the tracks were located due to the fact that the investigation is active and ongoing. I can say that the portion of the creek bed where the tracks were found is very remote and is not close to any road or home. The forest floor and creek bed were both littered with debris such as rocks, sticks, sweet-gum balls, and pinecones that would make it an unlikely place for a human to go barefoot. When you add the possibility of poisonous snakes, the area is home to rattlers, cottonmouths, and copperheads, the likelihood of people traipsing around without shoes seems very unlikely. The possibility that a family was out on a hike and decided to enter the creek to soak their feet was considered. However, not a single sign of human presence was noted. There were no shoe or boot prints to be found. The individuals traveled in excess of a quarter mile without shoes of any kind. The facts that the tracks were found in an a very remote location, that the terrain is extremely inhospitable to barefoot walking, and that the area is home to several species of poisonous snakes make it unlikely, in my mind, that humans made the tracks.

Certainly, it is possible humans are responsible. People do strange things to be sure and turn up in unlikely places. While a stop on a sand bar in the creek and a quick soak of the feet seems possible, a barefoot stroll in excess of a quarter mile down this creek bed stretches credibility.

As I type this entry, three TBRC members who live in the general vicinity are at the sight casting the track. If all goes well, I will have photos of the casting up soon. I am hopeful that we can discern once and for all if the maker of the track was human or not.