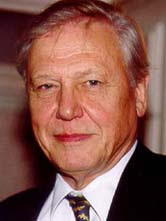 There is a brief article on the Daily Mail website out of the U.K in which revered wildlife expert Sir David Attenborough says, "There is very convincing evidence that yetis exist." He goes on to say, "I am baffled by the Abominable Snowman - very convincing footprints have been found at 19,000 feet. No one does that for a joke. I think it's unanswered." You can read the article here.

Attenborough is at least the second prominent wildlife expert to go on record saying that there is convincing evidence that undiscovered large primates may exist in the most remote areas of the planet. Dr. Jane Goodall, renowned primate expert, said in a 2002 interview on NPR's Talk of the Nation: Science Friday with Ira Flatow, "You will be amazed when I tell you that I'm sure that they (bigfoot/yetis) exist." You can read relevant portions of this interview here.

I think it is encouraging that established wildlife experts like Sir David Attenborough and Dr. Jane Goodall are going on record and acknowledging that compelling evidence that these animals exist is out there and warrants a closer look. It is my hope that well known, respected, and established scientists like these two will become interested enough on a personal level to push the scientific establishment to look into this mystery. I firmly believe that these animals could be documented if a properly trained and funded team was given enough time. At this time, however, few established scientists are willing to go out on the "sasquatch limb". I don't think it is a coincidence that Attenborough and Goodall waited until this point in their careers to make their proclamations. To make their thoughts on the sasquatch and/or yeti public earlier, assuming they have held these opinions for some time, could have endangered the funding for their life's work and irrevocably damaged their reputations within the scientific community.

Maybe, with the help of respected researchers like Attenborough and Goodall, the tide can be turned and this subject will cease to be career suicide for interested scientists. That may well be the break through that must occur before the "discovery of the century" can take place. It may also prove to be just as difficult to achieve.
Posted by Mike at 9:31 PM