Daniel Boone was born on November 2, 1734 near the present-day town of Reading, Pennsylvania. The sixth of eleven children born to Squire Boone and the former Sarah Morgan, he would go on to earn great fame as a hunter, soldier, politician, statesman, woodsman, and guide. To this day, his is a household name that inspires images of trailblazing adventure and life on a frontier now long gone. Volumes have been written on this legendary figure’s life and of late, I have read through several tomes about this American legend. While doing so, one incident related by the great man himself kept popping up that seems to have been given short-shrift by each his biographers: Boone’s claim that he once shot and killed a ten-foot tall, hair-covered beast, called a “yeahoa” or “yahoo,” in the region that would one day become Kentucky or West Virginia. 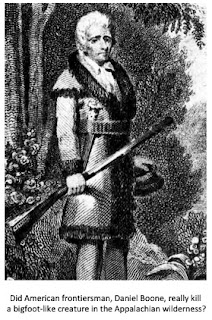 It is easy to see why a biographer of Boone would not know what to think about such a claim. The man did not suffer fools gladly, nor did he tolerate being thought of as one. This is obvious to anyone who reads about how Boone handled being dragged through a humiliating court-martial in 1778. Though he was found not guilty - and was even given a promotion in rank after the court heard his testimony about the matter in question – the frontiersman remained bitter about the entire affair and rarely spoke of it. The grudge against his accusers is one Boone held until the day he died. Yes, Boone was very conscious of his reputation and public image. That being the case, it seems odd he would make a claim as bizarre as having killed a monster.

Some biographers go into more detail than others about the alleged incident; however, all seem to agree on the basic details of how the story came to light. Late in his life, Boone was holding court with a group of distinguished citizens at a dinner held in his honor at an inn in Missouri. At the conclusion of the meal, a question-and-answer session of sorts seems to have taken place. It was at this time that one of the men in attendance asked for a story. It is unclear if the gentleman asked for the particular yarn he ended up hearing or if Boone decided on the tale to be told. Either way, the story Boone shared was one of having come upon and shooting a ten-foot tall, hair-covered “yahoo” in the Appalachian wilderness many years before. The old frontiersman did not get too deep into the tale before one of the men listening laughed out loud and declared the story “impossible.” Accounts indicate that Boone was deeply offended and refused to continue despite the requests of the others in attendance. The awkwardness of the situation led to the premature end of the get-together and people began making their exits. After most of the others had left, the innkeeper’s son petitioned Boone to finish.

“I would not have opened my lips had that man remained,” said Boone.

“Well, we are alone now,” the boy replied.

The frontiersman is said to have smiled wryly before saying, “You shall have it…” and finishing the story for the lad and the few holdouts who quietly made their way back into the room once it was obvious the story-telling had recommenced. 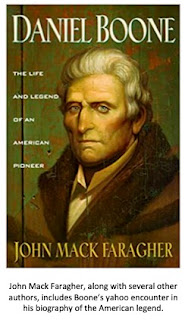 While Boone never received much in the way of formal schooling – and his spelling was notoriously “creative” – he read well. His early favorites were history books. It is also said Boone took a strong liking to Robinson Crusoe. Later, two books dominated the frontiersman’s reading time: the Bible and Gulliver’s Travels. Written by Irish writer and clergyman, Jonathan Swift, Gulliver’s Travels became an instant hit upon publication in 1726. Most likely think they are familiar with the plot of Gulliver’s Travels in which the main character finds himself shipwrecked on the shores of an island nation called Lilliput and is taken prisoner by a horde of the island’s tiny inhabitants. It is true this is the most well-known part of Swift’s masterpiece; however, the tale of Lemuel Gulliver’s trials and tribulations among the Lilliputians is just part of the overall work. It is actually the story of Gulliver’s fourth voyage that concerns us in regards to the tale told by Daniel Boone.

In Part 4 of the book, titled “A Voyage to the Country of the Houyhnhnms,” Gulliver – who has tired of his life as a surgeon – returns to the sea as captain of a merchant vessel. After several crew members die, Gulliver hires replacements out of Barbados and the Leeward Islands. Unfortunately, the new hires turn out to be buccaneers and soon mutiny. The pirates strand Gulliver on the first piece of land they come across and sail away in his ship. It is now that the story becomes relevant to the Boone tale as the fictional Gulliver soon encounters some terrifying creatures:

“At last I beheld several animals in a field, and one or two and deformed, which a little discomposed me, so that I lay down behind a thicket to observe them better…their heads and breasts were covered with thick hair, some frizzled and others lank; they had beards like goats, and a long ridge of hair down their backs…they often stood on their hind feet…”

“My horror and astonishment are not to be described, when I observed in this abominable animal, a perfect human figure: the face of it indeed was flat and broad, the nose depressed, the lips large, and the mouth wide…the forefeet (arms) of the Yahoo differed from my hands in nothing else but the length of the nails, the coarseness and browness (sic) of the palms, and the hairiness of the backs. There was the same resemblance between our feet, with the same differences…the same in every part of our bodies except as to the hairiness and colour (sic)…I never saw any sensitive being so detestable on all accounts; and the more I came near them the more hateful they grew…”

Daniel Boone was intimately familiar with the yahoos described in Gulliver’s Travels. If he had ever come into contact with a huge, hair-covered, human-like beast in his years of traversing the American wilderness, calling the beast a yahoo – based on the description of the creatures written by Swift – seems natural enough. To this day, the names Yeahoh and Yahoo are used to describe sasquatch-like creatures said to roam the mountains and forests of Appalachia.

Critics say Boone’s tale of shooting a bigfoot-like creature is just a campfire story meant to entertain his rapt followers who hung on his every word. Boone biographer, Robert Morgan, would seem to concur and wrote, “He (Boone) was also known to tell tales about encountering great hairy monsters like the yahoos in Gulliver’s Travels. Most likely it never happened.” It is hard to blame Morgan for having doubts about such a fantastic claim, but he dismisses the tale without any elaboration. While the story might be hard to take at face value, Morgan himself writes about the integrity of Boone and how much he valued his reputation. It would seem proper for the author to explain why the famous woodsman would veer from his character and fabricate a story about having killed a monster, especially when it seems all scholars agree regarding how offended the frontiersman became when his story was challenged. 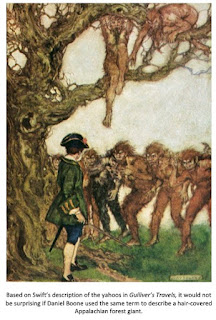 Boone is said to have related the tale of the yahoo on multiple occasions, most often during the last year of his life. Some have speculated that he might have been losing his faculties during his 85th and final year on this earth. Others correctly point out that the “deathbed confession” is a real phenomenon. People confess all manner of things when they realize the end of life is near. Such confessions are thought to help alleviate feelings of guilt or regret the dying person may have been harboring during their lifetime. Too, the “deathbed declaration” - when a dying person shares some secret knowledge - is not an unusual occurrence. Usually, these declarations have to do with feelings the dying individual has for another person; however, sometimes knowledge is shared which the person has been holding onto for years, decades even. Such dying declarations have sometimes been used in court as evidence; indeed, at times, the final words of a dying man/woman are given more credence in such a scenario, as common sense would seem to indicate that they no longer have anything to lose or gain by sharing what they know.

It is true Boone told the story of the yahoo multiple times over his final year(s), but not on his literal deathbed. Still, Boone’s health was beginning to wane and any man once he reached the age of 85 would realize that there was precious little time ahead of him. Too, men of a certain age often get to a point where they could not care less about what others think of them and no longer concern themselves with how they might be ridiculed. Could the knowledge that his time on earth was short have motivated Boone to relate his incredible tale while he still could? Was it important for him to share the story – one he had kept to himself for years – before leaving this mortal plane? Perhaps.

It is highly doubtful that the truth about whether or not Daniel Boone shot and killed a sasquatch-like creature will ever be known. What is inarguable is that Boone spent more time in the American wilderness than just about any white man who has ever lived. That being the case, if the sasquatch is a real creature, who would have been more likely to eventually come across one than Daniel Boone?

Faragher, John Mack. Daniel Boone: The Life and Legend of an American Pioneer. The Easton Press, 1995.

Mart, T. S. The Legend of Bigfoot: Leaving His Mark on the World. Indiana University Press, 2020.