One thing I have always been interested in when it comes to the sasquatch/wood ape phenomenon is historical newspaper accounts of “wild men.” The accounts I am most interested in all occurred years – often decades – before Roger Patterson and Bob Gimlin filmed what might very well have been a living breathing sasquatch at Bluff Creek, California or Jerry Crew found huge footprints surrounding his bulldozer near Willow Creek (an event which was heavily publicized and thought by many to be the moment bigfoot was “born”). NAWAC Chairman Alton Higgins brought the following historical report to my attention today.

The article in question was published on Friday May 5, 1871 in the Hagerstown Mail. The article concerns itself with sightings of a “strange and frightful being” that was seen off and on in McNairy County, Tennessee for several weeks in the spring of that year. Following is an excerpt from the article:

“We learn that between Sobby and Crainsville on what is called Piney, in McNairy County, TN a strange and frightful being has been observed for several weeks.

He is said to be seven feet high and possessed of great muscular power. His eyes are unusually large and fiery red; his hair hangs in a tangle and matted mass below his waist, and his beard reaches to below his middle. His entire body is covered with hair and his whole aspect is most frightful. He shuns the sight of them but approaches with wild and horrid screams of delight every woman who is unaccompanied by a man.

He sometimes with great caution, approaches houses and should he see a man he runs away with astonishing swiftness, leaping the tallest fences with the ease of a deer, defying alike the pursuit of men and dogs. He has frightened several women by attempting to carry them off, as well as by his horrid aspect and the whole country around Sobby is in consternation. The citizens are now scouring the woods and are determined either to capture or drive off the monster.” 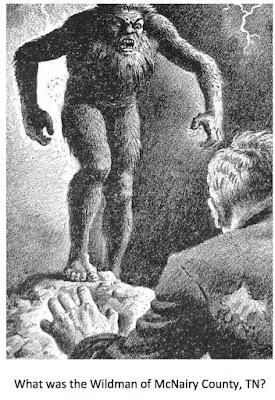 As is often the case, there is little to nothing in the way of a follow-up to this article. What happened to the Wildman of McNairy County, Tennessee I cannot say. The most likely answer is nothing. My guesswould be that the sightings and encounters ended as suddenly as they began. The likely explanationforthis is that the creature/Wildman moved on to other less populated areas.

What fascinates me most about these old accounts are the descriptions given of physical appearance and/or behaviors observed. The descriptions seem to match up very well when compared to what has been described by modern sasquatch/wood ape witnesses. In this short article alone there are numerous examples of this.

Notice anything familiar? The observations/descriptions from this 1871 article are things commonly reported today by modern sasquatch/wood ape witnesses. Not all contemporary witnesses describe everything mentioned above, but it is a safe bet that modern sightings feature many of these same details.

I realize that many of you out there who are interested in the bigfoot phenomenon already know about a lot of the historical reports out there (many of which are detailed in Chad Arment’s book The Historical Bigfoot). There is no new news here for many of you. Many, however, are unaware of just how many similar articles appeared in newspapers in the mid to late 1800’s and into the early 1900’s; a time long before the term bigfoot was popularized. The fact is one of the things that convinced me years ago that there was something to this whole sasquatch mystery.

For those interested in historical Wildman accounts, the Chad Arment book mentioned above is a great place to start. If nothing else, these old articles prove that tales of huge, hairy, upright man-like creatures go much farther back than the 1950’s-1960’s.