I had a few minutes so I thought I would update you on the latest report I have received of an anomalous black cat in the state of Texas. I am going to try to get these reports documented as they come in as opposed to letting them stack up as I have done in the past. The original text of the message I received is below.

“March 19 2016 I am a gate guard in Tilden Texas and yesterday night I killed two rats and put them about Twenty yards out my bus door I had my door window open and heard some growling I looked out and didn't see anything so I stared for awhile and damn a large black cat came from under my bus and ran and grabbed one of the rats. It was at least 4 foot long with a huge tail. I'm going to try and get a picture next time to send to you. And by the way the other rat got eating by a coyote.”

TCH Comment: Tilden is an unincorporated community in McMullen County approximately 60 miles to the south of San Antonio at the intersection of state highways 16 and 72. The climate here is typical of south Texas in that it is hot and dry during the summer and enjoys mild winters. The Frio River flows to the west and north of the town until it joins up with San Miguel Creek and empties into Choke Canyon Reservoir. The creek and river are paralleled by a greenbelt through which all manner of wildlife travels on a regular basis. The Tilden area is sparsely populated though the Eagle Ford Shale boom has provided a boost over the last few years. Despite this increase in population, there is ample room and resources for a big cat to roam. 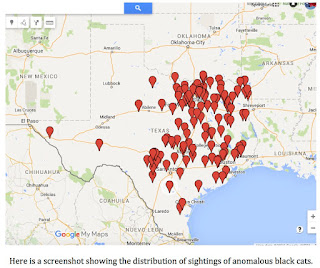 My first thought upon reading the report and seeing where the visual took place was that the cat seen might have been a large feral or, possibly, a jaguarundi. It is true that McMullen County is farther north than these furtive cats are thought to live but not far enough to make the thought of one making its way there absurd. The fact is, nobody is really sure how many of these cats live in Texas or how far north their habitat extends. Having said that, if the witness is accurate in his estimation of size, he did not see a jaguarundi. What he did see is open for speculation.

Here is the link to my interactive black panther map. Visit it and click on the pins for a short description of each sighting and the date it occurred.
Posted by Mike at 5:36 PM