The Legend of the "Donkey Lady" of San Antonio

Nestled in the foothills of the ancient Texas Hill Country, San Antonio sits and looks every bit the part of a modern American city. Glass skyscrapers and the Tower of the Americas kiss the azure Texas sky, while below the hustle and bustle of city life continues unabated. In San Antonio, however, the old is never too far from the new and history is everywhere. Night is the time when the weight of it seems the most oppressive. You can just feel that important things happened here and on nights when the moon is small, or absent all together, you can almost imagine seeing the ghosts yourself.

It is this eerie aspect of the River City that has given birth to a myriad of legends. La Llorona, brujas, thunderbirds, werewolves and ghostly specters all inhabit prominent places in the folklore of San Antonio. It is a lesser-known tale that I wish to examine today. It is a tale that is part ghost story and part cryptozoological puzzle; it is the legend of the “Donkey Lady Bridge.” 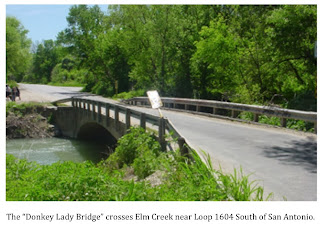 Don’t let the somewhat silly-sounding name fool you. The “Donkey Lady” has been a source of terror for residents of south San Antonio for generations. As with most legends, there are various versions of the story; all attempting to explain the origin of the “Donkey Lady.” Though they all vary slightly, the tales have enough in common to make it seem plausible that there is a seed of truth in them. I will recount the version of the legend I heard years ago as a young boy.

Years ago, most agree sometime in the mid 1800’s, a settler woman lived near the banks of Elm Creek with her husband and two children. The couple was barely scratching out a living from farming the stingy South Texas soil and raising a few head of livestock. One day, the son of a wealthy San Antonio merchant came riding onto or near their property. Somehow, the young man came into contact with a horse or mule belonging to the pioneer family. The young man, the story goes, teased the animal and hit it with a stick. The poor animal retaliated in the only way it knew how and bit the merchant’s son. Enraged, the young man began to beat the animal even more severely than before. The poor creature’s cries reached the ears of the pioneer couple and they quickly rushed to the scene. It became obvious to the couple that their animal, no doubt vital to their livelihood, was about to be beaten to death. The couple began throwing rocks at their animal’s assailant and pelted him several times. They did not realize this young man was the son of an important man in town. The young man hurled a string of expletives at the couple as he retreated but swore he would get even with them. 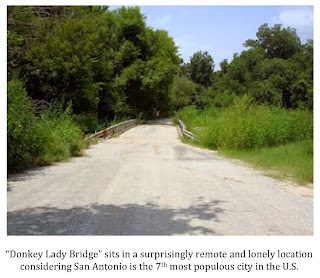 That night, a party of men, led by the wealthy merchant and his son, stealthily approached the young family’s cabin and set fire to it with torches. The heavily armed men refused to allow anyone inside the cabin to leave. Desperate, the man of the house attempted to make a break for it in the hopes that his wife and children could escape while he distracted their attackers. Alas, he was gunned down almost immediately upon setting foot outside the cabin. The screams of the woman and her children as they burned alive were heard up and down the creek for over a mile.

Just as the mob was sure that their unholy task was complete, a figure, engulfed in flames, smashed through what was left of one of the cabin windows and staggered toward the stunned and now terrified men. The woman’s hands seemed to have been burned down to mere nubs and her face appeared to have melted or sagged to the point that it was unnaturally long and deformed. The poor creature’s clothes were gone, burned away, revealing skin charred completely black yet, somehow, still on fire. The wretched creature that had once been a happy, sod-busting wife and mother let out a bone-chilling wail and then staggered past the men and hurled herself off the bank and into the waters of Elm Creek. The criminal mob followed to the point from which she had launched herself into the black water but saw no trace of her. Her body, it is said, was never found. 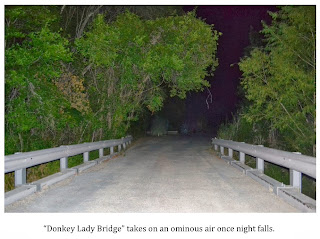 Since that terrible night, travelers who tarry too long on or near the bridge have occasionally reported terrifying run-ins with the “Donkey Lady.” Horrible screeching and screaming is reported from time to time emanating from under the bridge or the surrounding woods. Some have claimed a malevolent creature of some kind has dropped onto the hood or roof of their vehicle, screamed loudly and scratched and clawed at the windows in an attempt to get at them. Photos exist of damage allegedly done to vehicles by the “Donkey Lady.” It is said that if you park on the bridge, shut off your headlights and wait, you will almost certainly encounter something truly terrifying.

I have absolutely no idea how much, if any, of the above tale is true. I’ve become familiar with other versions in the years since I heard this account. Whether they contain more or less truth than the version I grew up with is something I just can’t say. I do tend to believe that there is some germ of truth in the “Donkey Lady” legends. The tale has endured far too long for that not to be the case, in my opinion.

What interests me more than whether or not the stories are true is what people are still seeing on or near the Elm Creek Bridge. Could there be a flesh and blood creature responsible for the legends? If so, what could it be? Many have screwed up their courage and ventured under the bridge to examine the muddy bank for clues. Some have come back with photos of hoof-like tracks. Is this proof that the “Donkey Lady” exists? I would hesitate to say that. This is Texas, after all, and finding the tracks of a horse or mule anywhere in this state, even under the “Donkey Lady Bridge,” would not be all that unusual; however, whatever haunts this bridge and the surrounding woods is still seen on occasion and is heard more often than that to this very day. If anyone out there reading this post has had any experiences at the “Donkey Lady Bridge,” I’d love to hear about them. 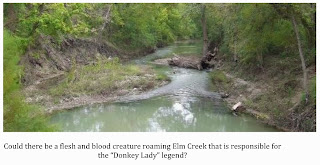 I’ll, no doubt, receive criticism from some for this post. To some degree this is understandable, as the tale of the “Donkey Lady” of Elm Creek seems more of a ghost story than anything else. Still, ghosts typically don’t dent hoods or leave hoof-like tracks in the mud of creek banks. Maybe there is a biological explanation for the legends. If so, then the story of the San Antonio “Donkey Lady” definitely belongs here. In addition, I’ve inadvertently become something of an amateur folklorist while doing research on historical sightings of wild men, black panthers and river monsters. I’ve run across all kinds of interesting stuff and I have a hard time not sharing a great story.

Whatever you believe the truth behind the “Donkey Lady” legend, you must admit…

Email ThisBlogThis!Share to TwitterShare to FacebookShare to Pinterest
Labels: Best of TCH, Out Of Place Animals, Texas Cryptids