I received an interesting text message last week from a friend who lives out West of Killeen, TX. She and her family own a large piece of property outside of town where, on occasion, some odd things happen. This is the piece of property where I had game cameras up for several months after the media reported a “mystery predator” killing goats in the immediate vicinity.

My investigation of the property yielded no evidence of anything other than coyotes and a gray fox. That being said, I felt that the possibility of a large cat coming through the area from time to time was real. The patriarch of the family has claimed a sighting of a large cat from time to time but he has reported seeing wolves much more often. As you might imagine, I figured that he had likely seen a large coyotes and not a wolves. Red wolves and coyotes are colored very similarly and it is very plausible that someone could make that mistake. This gentleman, however, was adamant that he knew what a coyote looked like and this was no coyote. He went on to say that my argument didn’t apply anyway since what he saw looked like a gray or timber wolf (Canis lupus).

Gray wolves are huge animals with the males averaging right at 100 lbs. with larger individuals not uncommon. They once ranged all over the North American continent and did live in Texas. Though never as common as the Red Wolf (Canis rufus), they were not that unusual a sight in the early days of Texas. While it is nearly universally accepted that gray wolves have been extirpated from the state, reports of sightings do continue to trickle in from time to time. Many in Southeast Texas feel that a small group of gray wolves continue to hang on in the Big Thicket National Preserve. None other than Geraldine Watson, often referred to as the guardian angel of the Big Thicket, claims to have seen them in the region. However, seeing one in Central Texas would be huge news. Many would say it is impossible. However, recent reports indicate that animals roam longer and farther than most would ever suspect (For example, a 104 lb. gray wolf was killed in Missouri in 2009). Could a literal “lone wolf” have made its way here? 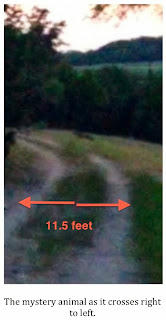 About two years have now passed since I first visited this property and while some odd sounds have been heard on the property and a couple of interesting, but blurry, game camera photos obtained, nothing of real note has been captured. That might have changed last week, at least to a degree.

My friend has taken to routinely driving the property around dusk in the hopes that she might spot something unusual. Last week her efforts were rewarded when she captured what looks like a very large canid of some sort in hot pursuit of some cottontail rabbits on video. She used her cell phone to capture the footage and it is a bit hard to make out but something is there. The animal, whatever it is, can clearly be seen in the still shot taken from the footage.

The animal is large and dark, if not totally black. My friend said that she clearly saw a thick, bushy tail that was pointed out or slightly up as the animal ran across her field of vision. This is an important detail. First, the physical description of the tale being “thick and bushy” totally eliminates the possibility of this animal being anything but some sort of canid. The observation of the tale sticking straight out, if not slightly up is also important. Wolves trot and run with their tails pointed straight out behind them while coyotes locomote with their tails pointed downward. It is enough to make you wonder a bit. 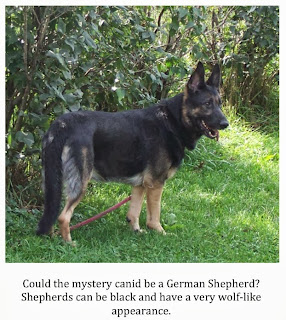 I asked her to return to the site where the animal was spotted and measure the distance from the outside of the tire rut on the left to the outside of the tire rut on the right. She reported that the measurement averaged about 11’ 6” at different points in the “road.” Looking at the still taken from the footage you can see that the animal in the frame is quite large. It is not in a perfect spot to get a truly accurate size comparison (isn’t that always the case?) as the rutted road bends back to the left at the exact spot where the animal was crossing. Still, you can clearly see that this was a large animal. To my eye, and take this with a grain of salt, the animal looks like it could easily be 5’ in length nose to tail. If so, this is no coyote.

So, what is roaming this property? I suppose there are several explanations that might be more likely than the idea that a gray wolf has found its way to Central Texas. The first that comes to mind, and the most likely to be true, is that this is some sort of large domestic dog that has gone feral or that lives somewhere nearby and is allowed to run free. The description given of the animal is not unlike that of a German Shepherd. German Shepherds can be totally black in color as well. What I don’t know is how they hold their tails when they trot or run. Some will continue to think that a big coyote is shown in the video. I can’t go with that based on the size and color. Those that live on the property, though, continue to think they have something unusual that comes through from time to time. They hear howling, they find tracks, and now they have video, grainy though it may be. Certainly, the video isn’t clear enough to tell us anything for sure other than a large, dark animal of some kind is, or has been, on the property, but could it really be a wolf? 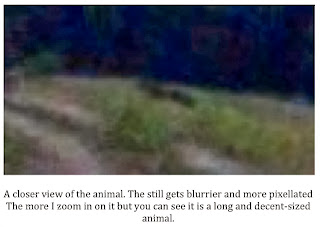 The animal in the video is probably a large dog… probably. My friend has a game camera out and is hopeful of eventually capturing a photo that proves once and for all the identity of this animal. To this point, however, this unidentified canid remains every bit as elusive as some of the other cryptids I pursue. Sooner or later, we are going to get that photo.