I remember being very worried about only two things as a 10-12 year old boy. The first was the belief that we would all be switching over to the metric system and I would have to relearn all things related to measurement. The second thing that preyed upon my young mind was the impending and inevitable arrival of Africanized “killer” bees. Producer/director, and master of the disaster movie, Irwin Allen chronicled the coming bee apocalypse that would soon be upon us in the United States in the 1978 movie The Swarm. While tame by today’s standards, the movie made quite an impression on me. I paid close attention to any killer bee news stories on television or in the newspapers after seeing it. As time went on I realized that my fears had been unfounded. We were not converting to the metric system and the bees were not coming to kill us all. We were safe.

Maybe I was wrong.

While not nearly as dramatic as the huge swarming menace depicted by Irwin Allen in his film, and almost 40 years later than predicted, Africanized bees have arrived in Texas and they are causing problems. As a matter of fact, they are practically in my own back yard. The danger was highlighted by a couple of incidents here in Central Texas over the last couple of months.

On Monday, August 26, a Waco man was taken to a local hospital after being stung dozens of times by bees he accidentally disturbed while mowing his lawn. The man will recover and authorities dispatched a beekeeper that found the hive about 30 feet off the ground in a large tree. The beekeeper destroyed the nest. Authorities said the attackers were identified as regular honeybees and could not say why they reacted so violently. I’ve since heard rumors that this identification might have been premature but have not seen anything official. 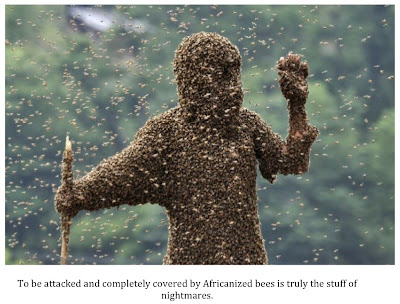 While the identity of the attacking bees in the Waco attack may still be up in the air, there is no doubt as to what type of bees attacked and killed a Moody man back in June. Larry Goodwin was riding on his tractor when he came across a hive of Africanized bees in an old chicken coop. Their attack was swift and merciless. Goodwin was stung more than 1,000 times and died at the scene. His wife and daughter, who rushed to his aid, were each stung about 100 times each. Local beekeeper Allen Miller was called in to remove the hive and said he’s seen more Africanized bee hives in the past few weeks than he normally sees in a year.

In July of this past summer a swarm of killer bees attacked and killed two horses and severely injured two adults near Pantego, TX. According to the owner, her two horses were, “so covered in bees that they shimmered,” before they were overcome and collapsed. The owner and her boyfriend were stung upwards of 200 times when they tried to intervene and help the horses. Pantego is in Tarrant County near Arlington.

There are other, less recent, attacks, too. They range from the south Texas Rio Grande Valley to north Texas along the Red River. The killer bees are not getting the press that they used to; I guess the media squeezed every last bit of mileage from this topic years ago. Don’t let that fool you though as the Africanized bee is here to stay.

Killer bees are actually hybrids produced by the cross breeding of African honeybees and various Western honeybee species. It is thought that Africanized bees in the Western Hemisphere are the direct descendents of Tanganyikan queen bees that were accidentally released by a replacement beekeeper in Brazil back in 1957. The Africanized bees are much more aggressive and tend to drive out and overrun native bee species. The Africanized bees are now actually the dominant type of honeybee used for beekeeping in Central and South America. They are prolific in this regard* but this is often offset by the fact that collection of honey is made much more difficult by the super aggressive nature of these bees.

- Tend to swarm more frequently and fly farther than other types of bees.
- They are more likely to migrate seasonably in response to poor food supply.
- They are more likely to “abscond”- the entire colony leaves and relocates in response to stress.
- They are more defensive when in “resting swarm” than other honeybees.
- Live in ground cavities more often than other honeybees.
- Guard their hives more aggressively than other types of bees and have a larger “alarm zone” around the hive.
- Have more guard bees in their population compared to other species.
- Deploy in greater numbers for defense and pursues much longer than other species of bee. 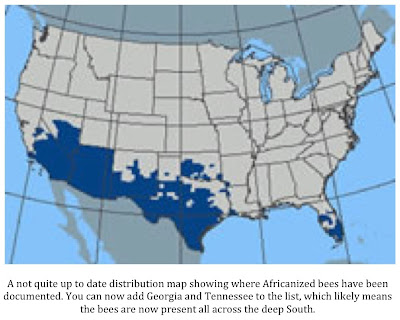 Africanized bees have spread from Central America and into the American Southwest and South. By 2002, they had been found in California, Arizona, New Mexico, Texas, Louisiana, and Arkansas. Recent events seem to indicate the bees continue to spread. In 2010, a 73-year–old man was killed by Africanized bees while clearing brush on his property in southern Georgia. In 2012, beekeepers located a hive of killer bees in Monroe County, Tennessee. It has long been assumed that Africanized bees would likely become a hazard in southern states but not spread too far north because they can’t tolerate the cold winters. That is being questioned now as, much like another invasive, the Burmese python, the bees are proving to be more cold tolerant than anyone would have ever guessed.

It turns out that my childhood fear of killer bees was not completely unfounded after all. I just hope that the metric system doesn’t make a comeback, too.


*I've actually seen conflicting reports about how prolific Africanized bees are when it comes to making honey. Some sources I've come across state they don't make much wax or honey while others say the opposite. I would welcome being enlightened by someone with more knowledge on this subject.

Email ThisBlogThis!Share to TwitterShare to FacebookShare to Pinterest
Labels: Bugs/Insects, News Items, Out Of Place Animals