I apologize for the lack of posts lately. As I noted on my Facebook page and on Twitter, I have taken a summer job with the Texas Parks & Wildlife Department and they are getting every bit of their money’s worth out of me. I applied for a part-time position for which I would have worked somewhere between 10-20 hours per week. After going through the interview process I was offered a full-time position for which I would work a minimum of 40 hours per week. I was a bit hesitant as I realized this would put a crimp in my summer activities but felt I should not turn the opportunity down for a couple of reasons. First, and foremost, I needed the supplemental income. I have a daughter going to Baylor University and really want to accrue as little debt as possible in getting her through school. Second, it is the Texas Parks & Wildlife Department. I would be on the inside, so to speak. If things were to go well I might be able to get on with them once I retire from teaching and coaching. It just would have felt irresponsible and lazy to turn the job down.

As a result, though, I’ve been pretty whipped upon arriving home each evening and haven’t felt much like writing. I have several topics lined up but just haven’t had the energy to sit down and bang out a post. Something happened today that changed that, however. 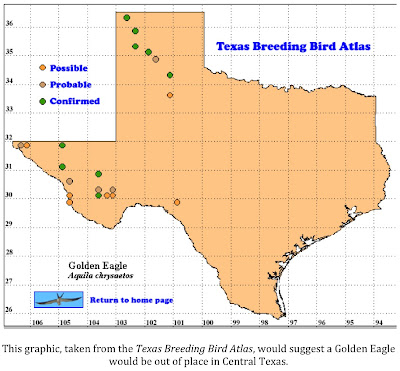 My wife and I made a trip to a furniture store to pick up a mattress and box spring for my oldest daughter’s room. After loading the mattress and box spring into the back of my truck we started home. The furniture store is not far from my home so I didn’t feel any need to tie the load down. I planned to wind around some back roads and drive slowly on the trek home so that nothing blew out of the truck. We were about halfway home when something very strange happened. We were negotiating a curve in the road when something huge swooped down out of the tree line and flashed in front of the truck. It was clearly a bird of some kind but was absolutely huge. My wife actually spoke first saying, “Did you see that?” I replied that I, indeed, had seen it and quickly braked to a stop. I jumped out of the truck in the hopes of getting another glimpse of the bird but it was gone. As I climbed back into the truck my wife said, “It was almost as big as a plane! What was that?” I said that I had no idea and started the drive home. I scanned the sky the rest of the way but saw nothing unusual.

My wife’s comment about the bird being the size of a plane was a bit hyperbolic but have to admit that I had the same impression. The bird was huge. It was simply stunning to see. I’m trying to be reasonable and realistic but this bird’s wingspan had to be in excess of 10 feet. It was dark in color but not black. It was definitely brown. This leads me to believe it was not a turkey vulture or black vulture (both species are common here and are large). My wife suggested an owl but I don't think so. Turkeys are native to the area and are big birds but this was far bigger than any I've seen in the wild and was too strong a flier to fit that bill. I really can't say what it was. It was a bit surreal, to be honest. I was glad my wife was with me as most of the time I’m alone when I see weird stuff. She was pretty excited by the whole thing and has been talking about it since we got home. 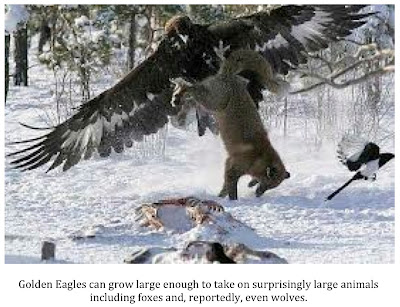 In my mind, the most likely suspect is the North American Golden Eagle (Aquila chrysaetos). The coloration of the bird I saw would fit that of the Golden Eagle but what about the size? Some quick internet research yielded the fact that Golden Eagles do get quite large. The average wingspan of the species is somewhere in the 6-8 ft. range. The average weight of the species, however, is only 9-14 lbs. The bird my wife and I saw sure seemed to have a larger wingspan than this and I would absolutely say it weighed more than 14 lbs. Even so, I have to think that the Golden Eagle is the most likely culprit. But do Golden Eagles live here? As if often the case, that is a more complicated question than it at first seems. Most distribution maps do not show the Central Texas area as accepted Golden Eagle habitat. Having said that, the maps show that the accepted range for these birds of prey isn't so far west that an adventurous individual couldn't find his way to the area from time to time.

It must have been a Golden Eagle...right? 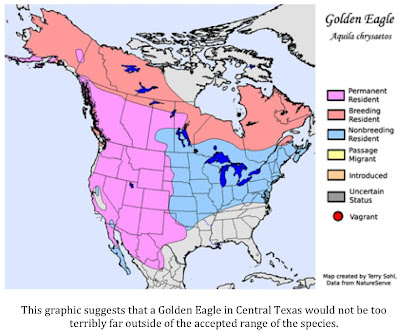 I guess this sighting did accomplish a couple of positive things. First, it energized me enough to get me back to the keyboard and do a write-up. The second thing that it accomplished was sucking my wife into my bizarre cryptozoological hobby. While she has always stood behind me and believed me when I’ve recounted some of my strange encounters there is nothing quite like seeing something strange firsthand.