As posted here a week or so ago, there is an interesting video clip making the rounds on the internet that seems to have captured the imagination of not just cryptozoology enthusiasts but the public at large. The video, allegedly shot somewhere in the Ural Mountains of Russia, shows what appears to be a large hair-covered creature bounding through the woods away from the camera bearing witnesses. Many have been quick to dismiss the video outright; as much for the fact that it was first posted to YouTube as because of anything related to its content. I actually find the video more intriguing than any other clip or photo I’ve seen in quite some time. I think it is worth taking a closer look.

I find the “leaping yeti” video, as it has been dubbed, intriguing for many of the very reasons some people are attacking it. The subject is moving and bounding in an odd manner. Why would a yeti or sasquatch be bouncing around like that? I’ll be the first to say that I have no idea. It could have something to do with the terrain it was negotiating though that is speculation. If so, it could be that the creature decided this mode of locomotion was the quickest way to escape. What I do know is that I’ve seen video of young chimps and gorillas at play that bounded and jumped about in very similar ways. In addition, this odd leaping behavior has been observed by alleged sasquatch witnesses before. A very good friend of mine, and fellow TBRC member, had a sighting near the Trinity River in southeast Texas back in May of 2004. The report can be read here. Following is a snippet from his account describing a leaping wood ape:

“It leapt across the trail much like a long jumper, landed on the right side of the trail and leapt again into the woods…”

My friend has been asked many times why he thought the creature he saw would jump in such a manner rather than just run. His answer has varied little over the years. He simply says that he has no idea and only knows that is what he saw. 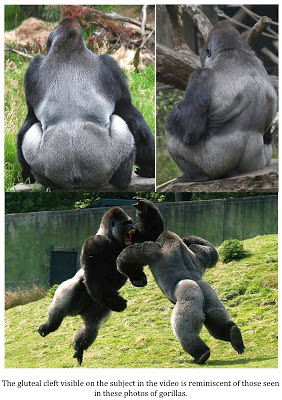 Another thing that I see in the video that makes me want to give it a second look is the presence of what appears to be a gluteal cleft. To put in laymen’s terms, and more crudely, there seems to be a butt crack present. Costumes, especially the cheaper ones which normal folks might be able to rent or buy, do not feature gluteal clefts. Even high-end suits used in big budget movies do not correctly portray this anatomical feature. Take, for example, 2001: A Space Odyssey. The creatures shown look like they are wearing furry pants when seen from the rear. This movie featured state of the art special effects and they got it wrong. 2001: A Space Odyssey was released in 1968. What about more recent films featuring ape costumes? Did any of them get it right? King Kong (1976)? Nope. Greystoke: The Legend of Tarzan (1984)? Nope. I’ve yet to see a movie or television show featuring a man in a suit that incorporated this feature. Recent high-end movies, like the 2005 remake of King Kong and Rise of the Planet of the Apes, have shown at least a hint of a gluteal cleft on their apes. The key here is that these special effects are generated completely through computer animation using real apes as their models. There is no costume involved. I do not believe a truly convincing ape suit, featuring a gluteal cleft, exists; at least not one that is available and that would be affordable to the general public.

Another thing about the subject in the video is the length and width of the arms. They clearly appear in the best still frame to be proportionately much longer and more muscular than the arms of a human in a costume would be. In addition, the arms appear to be at least as long, and longer to my eye, than the legs of the subject. This is a very ape-like characteristic. Many descriptions of the Asian yeti seem to point to it being more ape-like in appearance than the North American sasquatch. This video could be evidence of that. 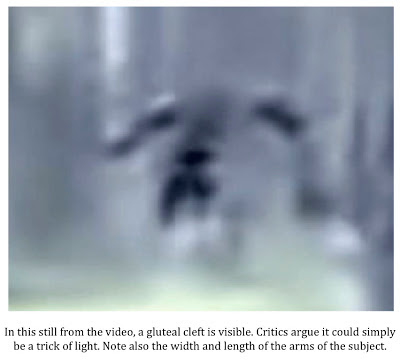 The coloration of the subject in the video also caused me to raise my eyebrows a bit. The Asian yeti is almost always described as being reddish-colored, almost orangutan-like. The subject in this video is colored very much like a silverback gorilla. In addition, the hair/fur, assuming it is hair/fur, appears to be somewhat short, as you would see on a gorilla, and not long and shaggy as has often been reported by people claiming to have seen a yeti. Granted, the distance and lack of definition in the video could be playing into what I am seeing when it comes to the length of the hair/fur but there is no arguing the coloration. A hoaxer would likely, in my opinion, give the public what it expects to see. In the case of a yeti that would be a reddish-colored suit.

The thing that gives me the greatest pause in regard to the possible legitimacy of the video is the conversation and tone of the two witnesses. Below is the video, this time, complete with subtitles. The narrator has more or less put his two cents in on the video but try to look past the spin he's putting on the whole thing and make up your own mind based on the translation provided. I mentioned in a previous post that I have a friend who was a Russian linguist/translator in the Air Force. He has verified that the translated subtitles provided are pretty much spot on.

The fact that the pair is already discussing posting the video on YouTube turns some folks off and has led many to assume this is a hoax. Why aren’t they more rattled by what they are seeing? Why aren’t they more agitated? I do not have answers to these questions. It is possible cultural differences play into the seeming lack of agitation expressed by the witnesses. I admit the reference to YouTube bothers me. I do think it is important to remember, though, that this is a different world than the one in which many of us grew up. YouTube is a daily part of younger people’s lives worldwide. Maybe it is only natural that this is the first thought the pair had. What else would someone, who is not concerned with scientific documentation, do with what they think is just a cool video?

Obviously, I can’t say for sure whether the video is genuine or not. It very well could be a hoax. I can only say that there are some things in this video that warrant a closer look. It is definitely a step beyond the typical YouTube fodder out there. In the end, I’m afraid this video sums up the problem with all photographic evidence. It isn’t good enough to be definitive. I truly don’t feel any video or photograph ever will be enough to document something as controversial as the sasquatch or yeti. You can bet even video of a higher quality would be dissected seven ways to Sunday and, given the technology available to the general public in the form of Photoshop and other programs, declared a hoax. That being the case, as unpalatable as it is to many people, I believe only a type specimen will definitively prove the existence of these creatures.

I would like to be wrong about that but I don’t think that I am.