I got out to check on my game cameras this weekend. As usual, I was very excited about the prospect of getting some great wildlife photos. Things were not to work out exactly as planned, however.

Those of you who have been following my Bell County camera project know that I had four cameras deployed along a dry creek bed that I’ve found to be sort of a “wildlife highway.” This travel route has proven to be very productive for me and I’ve netted some terrific photos. 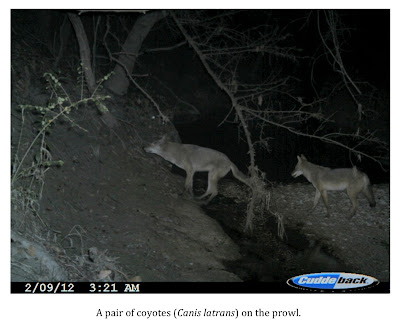 The creek bed is dry most of the time and only has significant water flow during and after a heavy rain. The water level can get high very fast when a significant rain event occurs. I took all of this into account when I placed the cameras. I thought I had placed them high enough that rising water would not be a factor. Turns out I was wrong. About two weeks ago a significant amount of rain fell on Bell County. This was during the time I was in Amarillo attending a funeral. I knew the rains had moved in and the water would be rising but there was nothing I could do about it and, as I said before, I thought I had placed the cameras high enough to be out of harms way.

I arrived on site yesterday afternoon and quickly discovered 3 out of 4 cameras had been at least partially submerged by rising water during the storm. My peaceful little run off creek had, ever so briefly, turned into a raging torrent that consumed my cameras. Miraculously, the SD cards in the cameras were not ruined and yielded the images that had been captured prior to the flash flood. The cameras themselves, however, failed to respond to new batteries and appear to be non functional. I’m hoping once I clean them up and get them completely dried out they will get back to working order but I’m not optimistic. 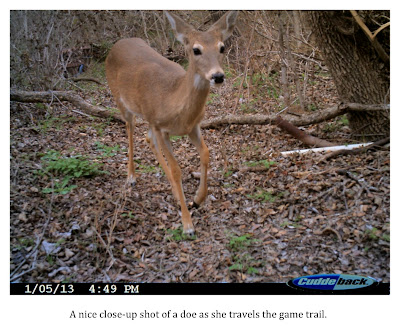 There was some good news. It occurred when I checked on the one camera that was not damaged by water. During my previous maintenance trip I had located a great looking spot above and parallel to the creek bed that seemed tailor-made for a camera. Two well-worn game trails intersected at this spot and I thought it would be good strategy to have a camera located here. I posited that this would be a good alternate route for the local wildlife during times when the creek held water. Turns out I was right and I got some absolutely great shots. The highlights of the set were the bobcat photos I captured. Two adult bobcats were photographed multiple times as they came and went along these intersecting trails. 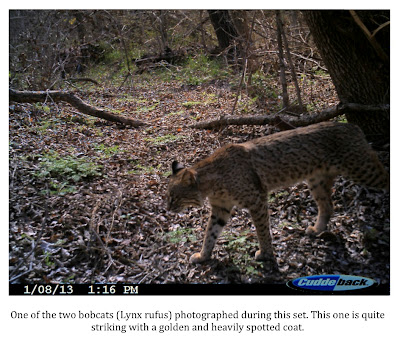 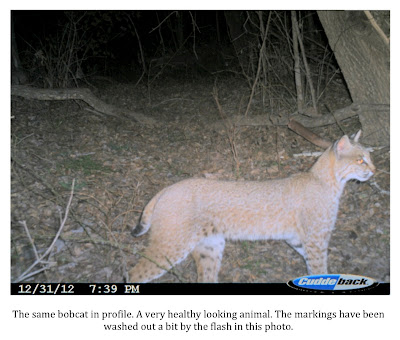 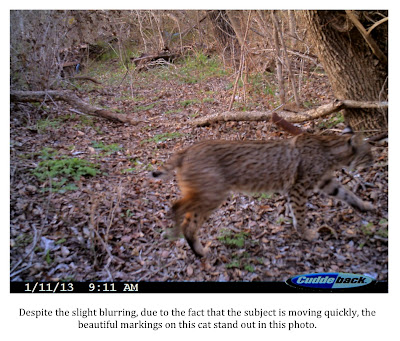 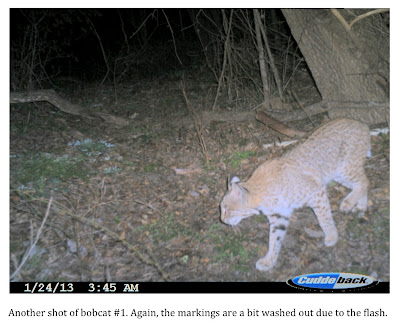 I’d managed to photograph these two before but never at such close range and with such clarity. They are two striking cats. One is a golden color with a leopard-like spot pattern. The second cat is really beautiful. It, too, is a gold color but its markings are more reminiscent of an ocelot with lots of dark spots and black stripes along its back. I was particularly pleased to get some shots that showed the faces of these two cats. When you get shots like these it reminds you that all the trouble and expense is worth it. There is just no way a guy like me could ever capture photographs like this any other way. 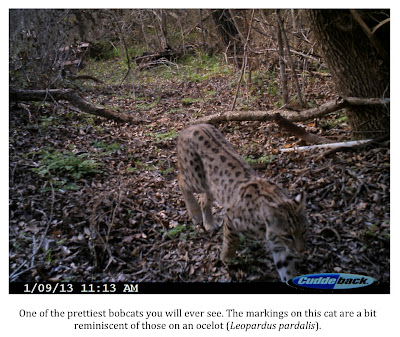 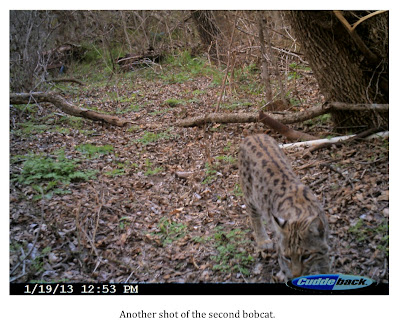 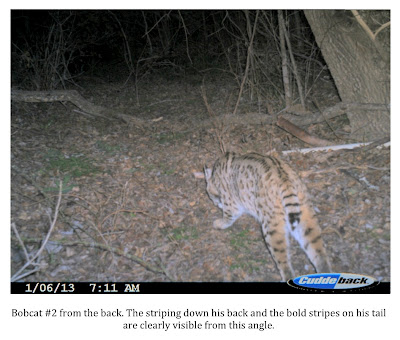 While I remained slightly down over the loss of 3 cameras, these photos did raise my spirits quite a bit. Knowing this camera was on high ground and safe from rising water also helped. I replaced the batteries and memory card, reset the camera, and was on my way. This is when things got really painful.

To extricate myself from the area I had to cross the creek bed. Never have I had any trouble but this time as I stepped up onto the opposite bank my foot slid out from under me and down I went. I fell forward and tried to catch myself. My right hand slammed down onto something very sharp before I tumbled back down the slope and into the rocky creek. I wish I could tell you that I hopped right back up none the worse for wear but I banged myself up pretty good. Maybe back in my 20’s I would have escaped unscathed but I’m 45 now and things seem to hurt more than they used to. I sat up and slowly tested myself out to make sure I hadn’t broken anything. Satisfied that my bones were intact, I turned my attention to my hand. 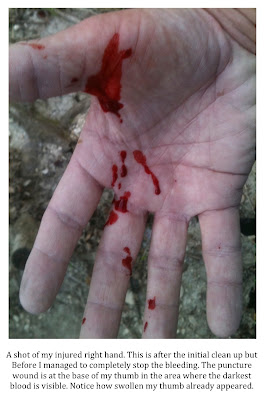 I had suffered what looked like a puncture wound in the, for lack of a better term, webbed area between my thumb and my forefinger. Whatever I had landed on had been sharp enough that it nearly passed all the way through this fleshy part of my hand. I was grateful to see that the object was not embedded in my hand as pulling it out would not have been a lot of fun. I was, however, now bleeding pretty badly. I wrapped my hand as best I could with a bandana and limped out of the creek and back to my truck. My hand was covered in blood. Quite a mess. Once I cleaned it up a bit, though, it really wasn’t all that bad. The wound turned out to be small. The heavy bleeding stopped pretty quickly but continued to ooze for quite a while. Of more concern was the fact that my thumb was swelling up pretty significantly. I guess I banged it pretty hard at some point during my fall. This swelling actually began causing me more discomfort than the puncture wound at that point. I cleaned my hand as best I could and left for home.

The incident points out the importance of keeping a stocked first aid kit handy at all times. A well stocked kit will take up some space but it should be an essential part of every outdoorsman's gear. This incident took place close to home and because of that was not that big a deal. A little soap and water, anti-bacterial cream, a bandage, and some ice and I was on the road to recovery. The same injury could quickly become infected and prove to be a real problem in more remote locations minus some basic first aid treatment, however. My little adventure also calls attention to how important it is to always let someone know where you are going and when you will be returning. It isn't too much of a stretch to think I could have knocked myself out or broken a bone when I took that spill. If so, it wouldn't have been too long before help arrived as both my wife and the landowners knew of my location and the approximate length of my visit. Should you become incapacitated for any reason you could find yourself in a real jam if nobody knows your whereabouts or the estimated time of your return.

So, there you have it; my latest adventure. Pretty humbling. I suppose a little humility isn't such a bad thing. I just wish it didn't make me quite so sore.
Posted by Mike at 2:25 PM