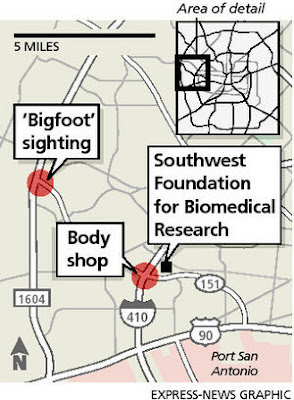 Last night I spoke to the lady who made the 911 call to San Antonio police to report a sasquatch sighting. I will go into some detail regarding that conversation but feel it would be beneficial for readers to hear the actual 911 call first. You can hear that call here. The witness sounds sober and coherent on the phone. She talks lucidly to the dispatcher and her request to have someone come out to the location to check things out seems reasonable to me. The witness did not want to meet an officer at that point in time. Some have criticized the witness for this or pointed to this detail as a sign the whole thing is likely a hoax. I am not so sure. As is clearly stated on the 911 call to the dispatcher, it was dark , raining, and the witness was too scared to walk through the wooded area to the nearest road where an officer could be met. This seems like a predictable and perfectly logical reaction to seeing something frightening, in my opinion. I also feel she must have been really shaken up to call the police as she and her husband would likely be forced out of their make-shift camp if police became aware of their exact location.

I cold called the witness and once she warmed up to me she rattled off details in a rapid-fire fashion that was sometimes hard to keep up with. I learned she and her husband are currently homeless and living out of a tent in a wooded area on the West side of San Antonio. They have been staying in this particular area for several years. The husband was talking at the same time in the background during the conversation in the same rapid-fire fashion, which sometimes made the conversation even more difficult to follow. However, I was able to glean some additional details not published, that I have seen, anywhere else. She claims not to have talked to anyone else regarding this incident and that no one has visited the sighting location. This would seem to make some of claims of other investigators who say they have found tracks, hair, etc. dubious at best.

The witness has a clothes line strung up that at her campsite that is, according to her, about five feet off the ground. She was walking near this clothes line when she noticed a large hair-covered upright creature staring at her from the other side of the line. She stared at it for a few seconds and then it bolted away from her, scooped up a deer carcass lying on the ground, and made its way into the brush. As it retreated, it let out a loud scream the likes of which neither the witness or her husband had heard before. The witness estimates she was no more than 30 feet away from the creature initially. The point at which she lost sight of it was about 50 feet away. While it was dark, she had, in her words, "a pretty good fire going." This fire lit the area up enough to get a good look at the animal. She added that there had not been a deer carcass in that location earlier.

She describes the animal as dark and covered in hair or fur. She is estimating the creature's height to be between seven and eight feet tall. She estimates this based on how much taller the animal was than the five foot high clothes line. It walked away very quickly on two legs. At no time was the animal ever on four legs. The deer carcass was picked up easily. The witness said, " It picked up that deer like it was nothing and tucked it under its arm like a football." She added, "It didn't even slow it down any." The husband corroborated everything she said. albeit from the background while she was trying to tell her story. The pair was very frightened by the idea something so large and powerful was in the vicinity and thought it best to call the police.

The witness described some things that intrigued me. The first was how the creature stood as if frozen in place for several seconds. This reminded me a bit of a fellow TBRC members sighting account. This gentleman was out setting up a game camera in an area where there had been several recent sightings. He looked up to see a large dark animal looking at him from a brushy area. He felt the animal must have thought he had been spotted. This "being seen" is what prompted the creature to run away. The San Antonio witness similarly said, "It didn't move until it realized I had seen it." She seemed to feel if she had not "gawked at it" it would never have moved at all.

The second thing I found compelling was the deer carcass. Sasquatches carrying deer, hogs, etc. have been reported before. What is interesting about this situation is that the deer was already dead and the location of the couple's campsite. According to the witness, dead animals are dumped in the area by, as she described them, "government trucks." If true, my best guess is that county or city workers are scraping up road killed animals and, instead of disposing of them properly, dumping them in this area. Why they would do this I cannot say. If true, this could explain why a sasquatch was in this semi-developed area to begin with. If these dead animals were dumped reasonably soon after being killed the area would be a continuous source of food for a sasquatch. It could stay hidden in this wooded area and wait for "deliveries" several times a week. Stories circulating about how the witness saw a sasquatch take and devour a live deer are not true, according to the couple.

The third thing that was very interesting was the scream the witness claims the creature made as it strode away. She said it was not a howl like a wolf would make but a scream. She had a bit of trouble in trying to describe it and instead tried to duplicate it for me over the phone. It may sound funny, and, no doubt, totally unscientific, but her mimicked scream rang true to me. It dawned on me that I had heard that before. The scream she made was eerily similar to the scream described by TBRC members heard outside their tent in the Big Thicket National Preserve during Operation Thicket Probe several years ago. At least it was very similar to these members best efforts at recreating it.

One more thing really made me sit up and take notice during our conversation. She claims, and her husband again corroborated, hearing loud banging sounds from time to time. According to the witness, they always seemed to come from the same direction. One day in the last week or so she and her husband decided to go try to find the source of the banging. She says they came across an old stump that looked like it had, in her words, "been beat to hell." Upon closer inspection, the couple found a hollow cavity at the base of the stump contained a beehive. She theorized that the creature was beating on the stump to get the bees to leave the hive so the honey could be accessed. I'm not sure about the validity of her theory but do know that chimpanzees have been documented beating on beehives for hours at a time in order to break through and reach the honey inside.

At this point, the witness really got worked up and went off on some tangents that raise some red flags for me. She claims that "government vehicles" have been driving all around the area since she called 911 and that sometimes they park for hours at a time. She says she has heard a very high frequency sound come from the vehicles during these extended stays. She feels that the sound is intended to flush the creature out of hiding. She also feels that there is a whole family of creatures in the area and that they are trying to "communicate with her by thinking" or, in other words, telepathically. She says she now can "feel" when one or more of these animals is close by and senses a "female presence" at times.

The witness was very convincing when discussing the actual sighting and the accounts of the banging and knocks heard over the last few weeks. After digesting her account, I am leaning toward believing her story regarding the sighting itself. I admit to being troubled by some of the theories she extolled on telepathy, government involvement, and habituation. However, whether I agree with the witness' interpretations of the events or not is not relevant to whether or not this person actually saw a sasquatch. I feel that is an important point to stress here.

I feel the monkey-like creature that visited a dumpster at a not too distant auto body shop is an entirely different and unrelated incident. By all accounts this small creature appears to be a macaque or similar small primate. I have no idea where this little guy might have come from but the location of his appearance and the timing of the incident appear to be entirely coincidental.

So, there you have it. The whole thing could be one elaborate hoax, I suppose. An on site investigation is going to be necessary before I can go any deeper on this one. I hope to have the opportunity to visit the sighting location in the next week or two. I will update things when, and if, that happens.
Posted by Mike at 9:35 PM