The San Francisco Chronicle reported today on a couple of unusual wildlife sightings in the Bay Area. California is a long way from Texas but the events reported by columnist Tm Stienstra may have a logical tie in to events that continue to be reported in the Lone Star State.

One sighting involved a bear. Apparently, a hiker nearly walked headlong into a bear while walking along the Peninsula's Skyline Ridge. The bear is likely the same individual spotted about this time last year in the same vicinity. The sighting makes 10 likely valid sightings of a bear in the Bay Area in the last 12 years. Stienstra

writes, "The idea that the Bay Area still has enough wild places for bears to live...is astonishing."

The event that really caught my eye, however, had to do with another animal: one that is not supposed to exist. Lynn Reed, a rancher, avid hunter, and, according to the article, wildlife expert claims he and his wife watched what appeared to be a black mountain lion for more than 10 minutes in the foothills near Dublin in Alameda County. The sighting gained even more credence when another large black cat was seen by an engineer in the nearby San Ramon hills. Reed's 10 minute sighting of a black mountain lion was the longest eyewitness account since a Game Warden reported one in the 1980s near the Sunol Regional Wilderness. "He was black as can be with a head the size of a 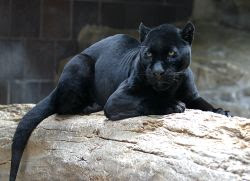 Of course, what makes the whole idea of a black cougar so interesting is that they are not supposed to exist at all. The pelt of a black mountain lion has never been recovered and no cases of melanistic cougars have ever been documented in the wild or in captivity. California wildlife officials are citing some tiresomely familiar theories. The most likely explanation, in their opinion, is that an owner of an exotic animal, like a black leopard or jaguar, let an animal loose. Black panthers, they say, do not exist in California.

According to the Texas Parks & Wildlife, black panthers don't exist in Texas either. However, to residents of river bottoms and heavily wooded remote spots in Texas, the big black cats are just part of daily life. I personally know two people who claim to have seen black panthers. One saw a large black cat while hunting on his family's property near the Davey Crockett National Forest in East Texas. The second person spotted both a tawny colored and a black "long tailed cat" in central Texas not 50 miles east of Waco. Wildlife officials fail to recognize that even normal colored cougars have returned to east and central Texas. The sightings are almost always explained away as a misidentification or an escaped pet. Reports of black panthers don't even merit a response from wildlife officials in this state at this point.

So, what are people seeing? There are several possibilities, in my opinion. The first possibility is simply that cougars can sometimes be black. This is a well-documented trait in jaguars and leopards. Scientists have yet to see it in cougars but that doesn't mean it doesn't occur. The second possibility is that jaguars still roam the state. Texas was once part of the jaguar's natural range. The last known jaguar in Texas was killed in Brownwood in the 1940s. It is thought they may still haunt the state's southern border but are not thought by wildlife experts to range into central or east Texas. One more possible candidate for the black panther sightings is the jaguarundi. The jaguarundi is a relative of the cougar but much smaller. It averages between 30 and 45 inches long and can be dark in color though, it is thought, not 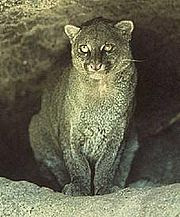 black. A final possibility is that there is simply an undocumented species of large black cat roaming not only Texas but other areas of the country as well.

So, which of the possible explanations is the right one? I'm not big on the jaguar explanation. The melanistic jaguar is well known but still not common. If jaguars were the culprits, I would think that the normal spotted coat would be reported much more often than the jet-black color. Also, the physical characteristics most often described seem to rule out the jaguar. Jaguars are massive cats with thick muscular builds. They are the third largest cat in the world coming in behind only the tiger and the lion in size. Jaguars have massive heads, necks, and shoulders. The cougar on the other hand, is a more lithe cat and not nearly as large. The jaguarundi may be responsible for some black panther sightings as they fit the "long tail cat" description and most people have never even heard of them. However, they are small and their size alone rules them out as the culprit in most black panther sightings. That seems to leave cougars or an unknown species as the explanation.

Whatever the explanation, people, including wildlife experts, continue to report large black panthers in this country. It is going to take some extraordinary photographic evidence or a body to convince the scientific establishment that these animals are real and do roam the remote areas of our state and country. Sounds familiar doesn't it?
Posted by Mike at 5:02 PM