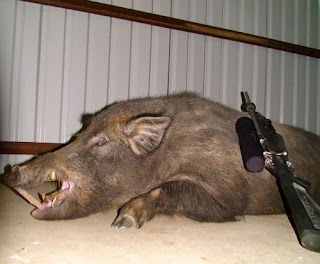 Today's edition of The Oklahoman featured a story about a very large hog killed in Johnston County last month. The hog weighed in at 558 pounds., had 2.5 inch tusks, and measured 6'3" in length. You can read the article here.

A firefighter named Landon Wood harvested the boar while hunting on an 8,500 acre ranch near Mill Creek. Wood took the shot from 80 yards. The .308 cartridge only penetrated halfway through the hog but was enough to take it down. Wood will be submitting his hog to Weiser, Weight, and Tusk - the equivalent of Boone & Crockett for trophy wild boars. If certified, this hog would be recognized as the largest wild hog ever killed in Oklahoma and the 15th heaviest ever in the U.S.

Officially, Wood's boar may become recognized as the state record but others may dispute the claim. According to the article, a hog weighing in excess of 600 pounds was killed near Durant two years ago. The boar was never certified, however. According to Jack Carson, spokesman for the Oklahoma Department of Food, Forestry, and Agriculture, Oklahoma hogs average about 300 pounds. However, he added, " We've seen exceptionally large hogs. In fact, I saw some while turkey hunting on the McAlester Army Ammunition Plant, that from my experience with seeing hogs, looked every bit of 500 to 600 pounds."

The feral hog problem continues to grow in the Texas, Oklahoma, Louisiana, and Arkansas region. Oklahoma now has reports of feral hogs from all 77 of its counties. It seems logical that the larger the population grows the more true giants will be encountered. While research, and experience, tells me that most wild hogs run away from people, it also stands to reason that the more hogs there are the more aggressive individual animals will be encountered. Always use caution when in close proximity to these animals.
Posted by Mike at 2:39 PM