As you may recall from my post a couple of weeks ago, I have started a camera trapping project in an effort to document big cats in the central Texas area. I have only managed to get one camera out thus far but will ultimately have five cameras out in various locations.

As I mentioned in the original post, the traps consist of 35mm film cameras that are almost five years old. The shutter speed is slow so I have tempered my expectations but am still hopeful I can get a photo of one of the big cats that have been seen in my area. I have just developed the first roll of film from my lone deployed camera and have three pictures along with several of what I assume are "near misses". What I mean by "near misses" are pictures of nothing but scenery. Something likely walked by and triggered the camera but the camera took too long to fire and missed the animal. I am experimenting with different kinds of bait and scents in an effort to keep the animals in front of the cameras long enough to get a good shot. Hopefully, I'll come up with a concoction that is effective to that end. In the meantime, here are the three photos that feature recognizable, if not perfect, shots of local wildlife.

The first shot of a doe, below, is the best of the bunch an clearly shows that there is a food source available for a large predator like a cougar in our area. You may notice the camera is set fairly low to the ground and gives an image that appears to be looking up at the deer. This was on purpose as I did not want to miss smaller animals or cats that sometimes slink up to bait or prey extremely low to the ground. 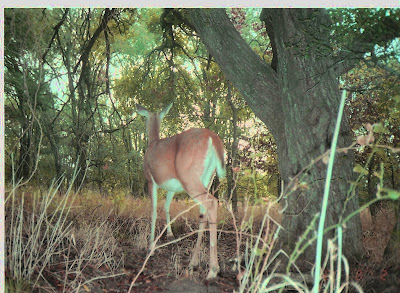 The second shot, below, may be my favorite even though it is not the clearest. It seems to me to show either a coyote or a fox closely inspecting the camera. I guess this could be the drawback to having the camera low to the ground. You can clearly see the darker eye area to the lower right of the photo and an ear to the upper left. This guy probably came trotting in from the baited/scented area well in front of the camera. However, the shutter did not activate quickly enough to catch him before he got right up on the camera itself. I hope to get a better photo in the future that will allow me to identify this canine as a coyote or a fox. I still think it is a fun shot. 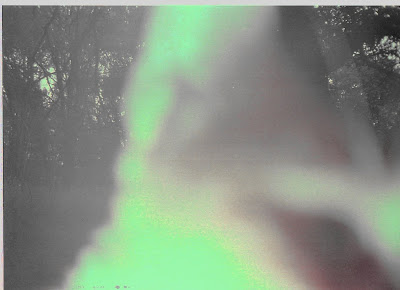 The final picture, below, shows a skunk passing by the camera. You can see him in the lower left portion of the photo. The white stripes are clearly visible. I actually find skunks to be beautiful animals and think they get something of a bad rap. Hopefully, I'll get a better photo of this guy or one of his relatives soon. 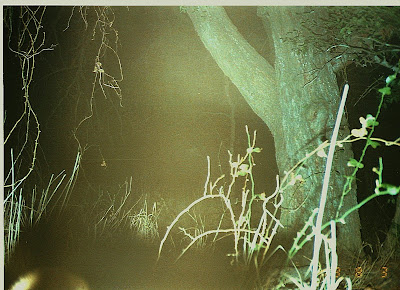 So, no cats caught on film yet, however, I remain hopeful. Cats are famously elusive and stealthy. The TBRC's camera trapping project is much more sophisticated, uses the absolute top of the line technology, is on a much larger scale, has been ongoing for over three years, and has yet to capture a photo of a cougar. This despite the fact that these large cats are known to inhabit the areas where the cameras have been placed. So, I will continue to hope for the best. In the meantime, I will remain wonderfully entertained by the photos of the visitors, like these three, who do pay a visit to my cameras.
Posted by Mike at 10:22 PM