Regular readers of this blog may recall that back on November 22 of last year I posted a piece written by TBRC Chairman Alton Higgins regarding the claims of one Mr. Bill Warren who says he purchased the pelt of the ostensibly extinct Tasmanian tiger, or thylacine (Thylacinus cynocephalus), at a garage sale in California. You can revisit the original post here. 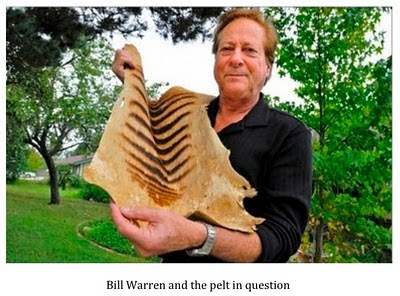 Basically, Higgins compared the available photos of the pelt in question to photos of thylacines in an attempt to discern if the pelt might indeed be genuine. What Alton discovered is that the pelt more closely resembled that of a zebra duiker (Cephalophus zebra), a small African antelope. The Warren photos were compared to photos of a live zebra duiker and to a duiker skin housed in a museum. His conclusion, and one I happen to agree with, is that the Warren skin is likely that of the zebra duiker and not that of a thylacine. Higgins wrote:

"Based on stripe pattern comparisons alone, I’d have to posit that the skin purchased by Bill Warren is probably that of a zebra duiker rather than a thylacine. The zebra duiker is classified as a threatened species. I’m sure any number of natural history museums would be happy to have it in their collection." 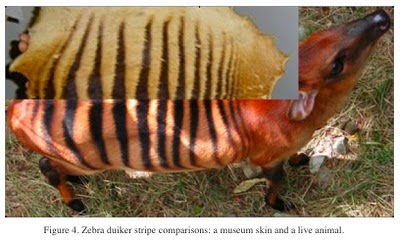 According to an article posted on the San Diego Union Tribune website, others are now coming to the same conclusion. SDSU biology professor J. David Archibald inspected the pelt a week or so ago. His conclusion? The pelt is that of a zebra duiker. He wrote in an email to Bill Warren, "While I cannot make any definitive assessment other than the pelt is genuine, I lean toward it being a zebra duiker based on the cumulative evidence." Archibald added, "Even if this identification is correct, this is a threatened species, and the pelt might be valuable if it can be sold legally." These words echo the comments of Higgins made back in November. 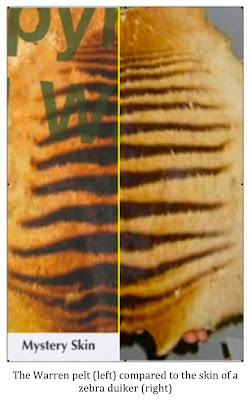 The final determination is important to Warren as it will greatly influence the potential value of the pelt. Museums and private collectors would likely be willing to pay upwards of $60,000 for the hide if it can be definitively proven to be that of a thylacine.

Many don't understand why obtaining this proof is a problem. Why not just have DNA testing done on the pelt and be done with all the speculation? The answer is a simple and familiar one: money. DNA testing is expensive and Bill Warren is unable to pay for it. He may not even want to as he would be taking an expensive gamble. I don't doubt Mr. Warren believes the pelt to be that of a thylacine but in the back of his mind he can't be absolutely sure. According to the news article he is, "flat broke." If so, to cough up the money for DNA analysis and find out the pelt is that of a zebra duiker might be painful. It seems no universities or museums stateside are interested enough to spring for the testing.

Warren does say that an Australian auction house would be willing to pay for DNA testing but faces a classic catch-22 situation. Although the thylacine is generally considered to be extinct, it is still listed as an endangered species by the U.S. Fish and Wildlife Service. That being the case, Mr. Warren can't ship the pelt to Australia for testing without a special permit; however, he can't get said permit because he can't prove the pelt is that of the endangered thylacine. Confused? Just imagine how Bill Warren must feel.

One has to wonder if Mr. Warren is beginning to wish he had never found this pelt in the first place.
Posted by Mike at 5:10 PM