Sasquatch FAQ: How Do They Survive Harsh Winter Conditions?

One of the questions often asked by those who are skeptical that a large primate like the sasquatch could exist in the more remote forests and mountainous regions of our planet is, "How could they possibly survive the severe winters in the temperate regions they are said to inhabit?" I've seen the question more often of late as the massive winter storms that have blanketed up to three quarters of our country in snow and ice the last several weeks have reminded us just how brutal winter can be.

So, what is the answer? Assuming the sasquatch exists, how does it survive harsh winter conditions when sub-freezing temperatures are common and food is scarce? The question itself, in my opinion, is flawed. Merely asking the question may be a result of we, as people, assigning human-like traits and, thus, frailties, to a species of animal. Nobody wonders how deer, cougars, moose, etc. survive the winter. The fact that the sasquatch is reputed to be bipedal, I believe, affects how we think about it. Even so, there may be clues as to how the sasquatch might be able to endure incredibly cold climates, at least for a time, found by studying how other animals manage to do it.

For example, a recent study conducted by the Research Institute of Wildlife Ecology, University of Veterinary Medicine, Vienna, and published online by the journal Functional Ecology, shows that sunbathing, or basking, in sub-zero temperatures is an important part of the winter survival strategy of the Alpine ibex (Capra ibex). The study asks the same question mentioned above. How, when temperatures plummet and food becomes scarce, do large non-hibernating mammals, cope in winter? In an effort to find the answer the group outfitted a number of wild Alpine ibex with sensors for measuring heart rate (which is a good indicator of energy expenditure), temperature in the stomach (a solid point from which to get a true body temperature reading), and locomotor activity. The group monitored the ibex for a period of two years while also recording the varying climactic factors during that span. The results were interesting and a bit surprising. 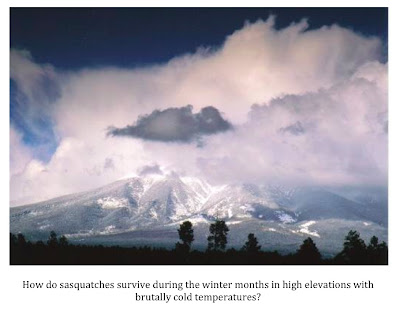 The first finding was that the ibex actually lowered their heart and metabolic rates significantly during the winter. By doing so the ibex used less energy and burned fewer calories, which allowed them to cope with the natural shortages of food during the cold months. The decrease in heart rate was found to be greater than the difference that might be expected by lower activities and/or lower body temperatures. This indicates the ibex have some other mechanism for conserving energy. Scientists do not yet understand what that mechanism is or how it works.

So, the ibex were able to sustain themselves on less food by somehow lowering their heart and metabolic rates but how are they able keep warm without extra calories to burn? The body temperatures of the ibex did fluctuate during the day. As might be expected, the lowest temperature readings were recorded around sunrise, after an entire night of bitter cold, and the highest temperatures were recorded in the late afternoon. These temperature fluctuations proved to be much greater in winter than in the warmer summer months. During the winter months the ibex would bask in sunlit areas until mid-day to help increase their core body temperature. Normal locomotor activities did not really begin until the body temperature of these animals peaked in the early afternoon. During the morning, these animals hardly moved at all. The only significant movement to take place prior to mid-afternoon was when the ibex moved from their night time bedding areas to the nearest sunny spot.

Basking is a well known and oft observed behavior used by reptiles and some small mammals, like the rock hyrax (Procavia capensis), but was not thought to be used to any large extent by bigger mammals. This study seems to dispel that notion. Indeed, Walter Arnold, one of the lead scientists involved in the study said, "The ability to take advantage of external sources of heat may be common to all mammals." He added, "It may form part of our heritage from reptiles, enabling us to conserve body reserves during periods when food is scarce." 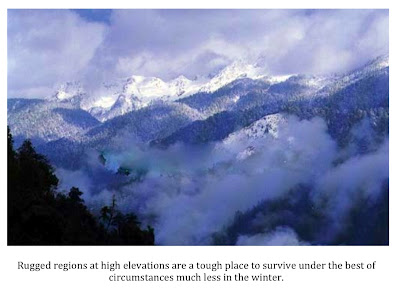 In a nutshell, what the study says to me is that the ibex studied were able to lower their energy needs during the coldest months of winter by reducing their metabolic rates. This would reduce the amount of nutrition needed to survive which is definitely a plus during the winter months when food-stuff is much more scarce. The ibex were able to overcome the lack of calories and help maintain their body heat by taking advantage of the only available external source of heat...the sun. The conventional thinking, that additional calories are needed to maintain body heat in winter, seems to be off base when it comes to this species.

These results seem to compliment the results of a study conducted by Washington University, St. Louis, which documented an incredibly low daily energy expenditure by captive orangutans (Pongo pygmaeus). You can read my entire post on this study here but it reads in part:

Dr. Pontzer and his team studied the daily energy expenditure of these great apes for two weeks and discovered an extremely low rate of energy use not previously observed in primates. The results seem to dovetail nicely with the slow growth and reproductive rates of orangutans. Dr. Pontzer speculated that this low metabolic rate might be an adaptation in response to severe food shortages in the orangutan's native habitats. It is pointed out that the rainforests of Southeast Asia, Borneo, and Sumatra all go through periods where the availability of ripe fruit, the orangutan staple, drops drastically. The study suggests that orangutans have adapted over time to become the ultimate low-energy specialists, decreasing their level of activity, and thus, the number of calories required to function, to avoid starving during these forest cycles when food is scarce.

Granted, the orangutan study focused on great apes that live in tropical environments and don't have to worry about generating enough body heat to survive harsh winters but I feel the fact that they possess a mechanism that seems to kick in during times when food is scarce to lower their energy needs could be a significant clue as to how the sasquatch might survive during times when food is scarce and the weather turns cold. The ibex study points to other large mammals having this same ability.

I think there are certainly other factors that should be considered when it comes to how the sasquatch might survive harsh winters and periods of time when food is hard to come by. Sasquatches may very well move from higher elevations when the coldest winter months arrive. I'm not sure I buy into any sort of full-fledged migration covering hundreds of miles but who knows? Another thing to consider are the implications of Bergmann's Rule which, to vastly oversimplify, implies that animals with great bulk and size are better equipped to deal with cold and harsh climates. I could go on but you get the idea.

To wrap it all up, it is important not to "humanize" the sasquatch. Don't assign the species the same frailties that would make it difficult for us to survive in brutal conditions to them. The debate on whether they are some sort of great ape or a primitive human is moot here. Be they human or ape they are made of much hardier stuff than we Homo sapiens. It is very possible that they possess some internal mechanism, like the orangutan and the ibex, which allows them to lower their metabolic rates and activities to such a point that they can survive on very little food for long periods of time. They may not need an abundance of winter calories to survive the cold after all.

As for basking in the sun to help raise body temperature, well, it makes sense to me. This species is said to exist in extremely remote locales and likely has very few natural enemies. So, sitting in a small clearing or on a rocky outcrop that is receiving direct sunlight would not put them at a large risk of predation or of being seen by humans. The fact they are covered with hair would help camouflage them even in an open area. Again, we must remember that they are not like us. They would not stand out starkly against their surroundings like a human wearing hunter's orange. If there is no real danger of discovery in sunning themselves for a while then I can't imagine why the species would not do it. I know when camping in cold weather I will move my camp chair through out the day to stay in sunny spots. This basking would be the equivalent of that behavior.

Winter may not be a time of plenty for sasquatches in temperate locations but the fact that sightings of these creatures have continued unabated for centuries tells us that they have figured out a way to deal with it just fine.