The video below will no doubt throw many folks for a loop. It shows a young white-tailed buck eating a bird that was injured and unable to fly. You can hear the shock in the woman’s voice who is shooting the video.

This sort of thing can’t be normal, right? Wrong. It turns out it isn’t that unusual at all. To say the behavior is common would not be true but it has been documented before. It turns out that deer eat all manner of odd things from time to time.

An article written by David Boyd of the Casper Star Tribune way back in August of 1998, and featured here on the USGS website, discusses the predaceous behavior of white-tailed deer (Odocoileus virginianus) and elk (Cervus canadensis).

In his piece, Boyd quotes Wyoming Game and Fish chief biologist Reg Rothwell as saying, “You come up with stuff that just surprises you because nobody’s documented it before.” He would add, “You think of these animals as grazers or browsers but they occasionally eat some pretty weird stuff.” 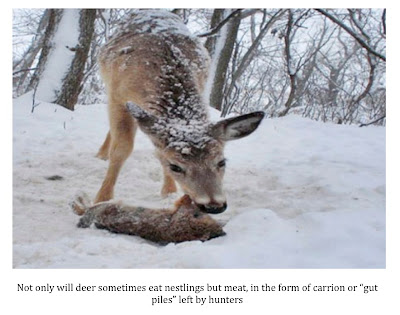 Biologists seem to agree that this sort of thing has likely been going on for a very long time. It is only the advent of small affordable video cameras, game cameras, and cell phones with video capability that have allowed the behavior to be successfully recorded in the last decade and a half or so.

Pam Pietz, a wildlife biologist at the USGS Northern Prairie Wildlife Research Center in North Dakota told Boyd, “Some of these animals really are omnivorous.” It is generally agreed upon that Pietz was the first to successfully document a white-tailed deer predating a bird nest with photos. “If they come across a nest, where the food doesn’t move or run away, they will take advantage of it.” 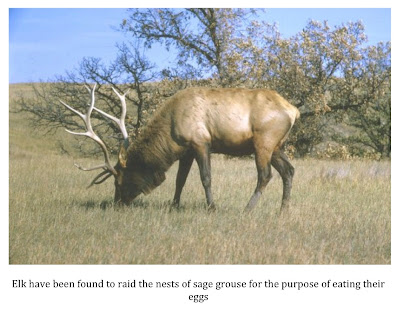 After capturing nest predations by white-tailed deer, Pietz posited that they would likely eat eggs as well. She decided to find out. She presented a captive deer with a few quail eggs. “It munched them right up,” Pietz said. While presenting a captive deer with eggs is a far cry from a wild animal raiding a nest on its own, the fact that the animal showed no hesitation in devouring them is telling. Elk have now been documented raiding the nests of sage grouse (Centrocercus minimus) and eating their eggs. Bird and reptile eggs are nutrional powerhouses. They contain everything a growing embryo would need to survive. They are loaded with high quality protein that is rich in amino acids, fats, vitamins A, D, and E, and minerals like calcium and zinc. Knowing this, maybe we shouldn’t be surprised deer eat them when the opportunity presents itself. 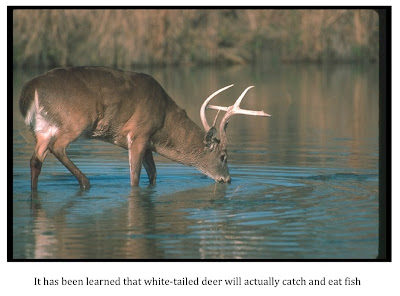 But there is more. White-tailed deer, at least some of them, seem to have a taste for fish as well. In a write-up on the Natural Geographic website, J. Wayne Fears writes, “A deer will kill and eat fish by using its paws to disable fish such as trout. Next, it will take the fish in its mouth, chew it and swallow it. Whitetails commonly eat fish up to 14-inches long.” I had heard of white-tailed deer eating odd things before but never fish. I have to admit this was new to me.

Maybe we should keep this story in mind the next time we hear someone report something unusual concerning wildlife behavior. Sometimes, it turns out that what they are reporting isn’t so unusual after all; it just had yet to be documented.
Posted by Mike at 6:01 PM

Email ThisBlogThis!Share to TwitterShare to FacebookShare to Pinterest
Labels: Miscellaneous