I have posted in the past about how coyotes (Canis latrans) seem to be getting more comfortable in close proximity to humans. I have speculated as to whether or not the increasingly bold behavior of coyotes poses a risk to humans. Many others began to wonder when Canadian folk singer Taylor Mitchell was attacked and killed by coyotes in what is described as the first documented attack on an adult human in history. It seems I am no longer the only one to wonder about this. 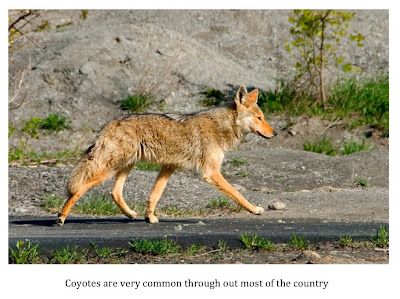 A talented young folk singer, Taylor Mitchell, is killed by coyotes as she hikes alone in a Canadian national park. It's the first fatal coyote attack on an adult human ever recorded, and it shocks not only the surrounding community but coyote experts as well. Highly intelligent and generally timid around people, coyotes have traditionally not been considered a threat to human communities. But are they becoming more habituated to us and are they losing their fear of us? In the wake of the attack, scientists, police and park rangers try to develop a clear picture of what happened - and why. And with coyote numbers increasing throughout North America, we explore how humans and coyotes co-exist.

It will be interesting to see what conclusions the producers draw from their look at recent coyote behavior. Check your local listings for the time the program will air in your area.

You can revisit my previous posts related to this subject here.
Posted by Mike at 10:00 AM